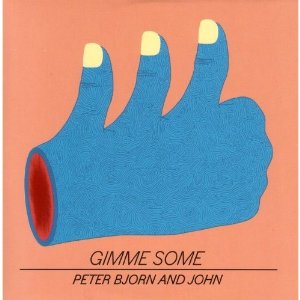 Ok, so you’ve all had plenty of time to hear, like, fall in love with and grow to despise Young Folks by now, their mega hit from 2007’s album Writer’s Block. You know, the one with the whistling that advertisers just refuse to let go of? Yes, that one. Well, you’d be forgiven for thinking that the band have done nothing for four years due to the omnipresence of that song but this is actually their third release since Writer’s Block. Admittedly, one of those was an instrumental piece only performed live once but still, PBandJ (Have I just turned them into a sandwich? I do apologise.) have kept themselves busy. If nothing from either of those releases, Seaside Rock or Living Thing, set the world on fire like Young Folks did it may be fair to say that was not for the want of trying. PBandJ have a real magpie attitude to music making; as in, they’ll steal from anywhere. Living Thing was a mix of 80s synth pop and early hip hop, with some African grooves thrown in to spice it up a little and Seaside Rock was a different kettle of fish altogether but you’d best search that out on your own to discover what that was all about.

Opener Tomorrow Has To Wait sounds like the Fleet Foxes getting a beating with a cattle prod and kicks things off in fine style. Dig A Little Deeper may not be the most profound song in the world but it’s still a heck of a lot of fun to listen to. I especially like the way it flirts with ska and calypso styles without ever fully becoming either. It’s a pure slice of sunshine and a perfect slice of pop to get you through the winter. Eyes is probably the stand out track for me, if only because it rocks more than it pops and sees them unleashing the guitars to full effect. Occasionally, the band channel their inner Sex Pistol a little too much and things tend to drudge along a little too much without every really engaging (Breaker, Breaker and Black Book in particular) and I could easily live without (Don’t Let Them) Cool Off, which sounds a little too much like The Cardigans (yawn!) for me, although that’s unsurprising given who the producer is. Having said that though, there’s enough here to get anybody’s juices flowing and the closing track I Know You Don’t Love Me is so much fun it’s worth the price of admission alone.

Peter Bjorn and John may want you to give them some but you owe it to yourself to simply go out and get some. Pop rock doesn’t come much more entertaining than this.