for many of the crowd, they are quite literally transported back a quarter of a century.

for many of the crowd, they are quite literally transported back a quarter of a century. 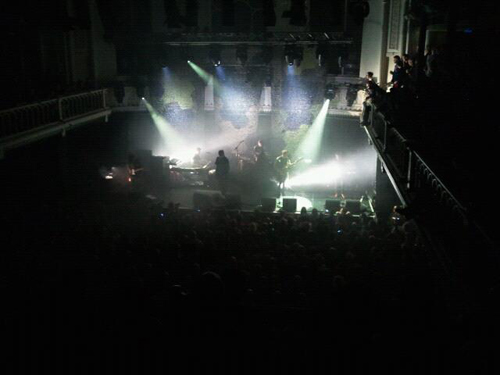 Ian McCulloch and Will Sergeant are shadows of their former selves. Literally, not metaphorically you must understand. You see, you don’t exactly go to see Echo and The Bunnymen. You go to listen to them, to experience them, to sense them even. There’s not much of a show, in a visual sense; the camouflage netting climbing up the back wall is brightly lit and you can sometimes see the arse end of a drummer and one side of a keyboard player glowing on occasion but the front of the stage is dark and dramatically so. The band appear as if in silhouette, like shadow puppets and you can spot Macca and Sarge a mile off as they’re sporting the same haircuts fans will recognize from the front cover of their fifth, eponymously entitled album. In fact, the only thing that breaks the spell are Macca’s white trainers. You can take the man out of Liverpool……

Of course, for the distinctly middle aged crowd packed into the Paradiso this set up just helps to fuel the nostalgia, as does the set list. The band play Crocodiles and (most of) Heaven Up Here, their first two albums, in order tonight and for many of the crowd, they are quite literally transported back a quarter of a century. Everywhere you turn, balding, grey haired men are discussing fond memories of past Bunnymen gigs and muttering things like, “It’s just like twenty five years ago.” In fact, there’s a lot of that going on. But let’s not file this gig in the same file as another nostalgia act trading on former glories just yet because, although there’s a very strong whiff of that in the air ,I must stress to you that it feels decidedly different to witness the force of the band in person. Sure, they look like they couldn’t give a flying fortress about anything but they sound IMMENSE.

Going Up bristles with a sense of doom and intensity, played harder and somewhat sharper than I’ve heard it in years, Stars are Stars breezes by and Pride just explodes into life, sending a girl on the balcony into a kind of trance; swinging her hips and arms in a manner that makes me think she’s trying to conjure up some connection with the other side. The song acts like a defibrillator for the audience. Having been shocked into a kind of submission from the off, the crowd begin to come to life. Grown men discover their arms and legs no longer have to stand still any more. They begin to get in touch with their younger selves once again and it’s not too long before Rescue comes along and sends them, and me, over the edge. Beer gets spilt. Dancing ensues. Others follow. We all wonder if this is the blues we’re singing and the song concludes with near rapturous applause.

Villers Terrace lets the side down somewhat, it must be said; the Roadhouse Blues section at the centre of it is neither warranted nor necessary. In fact, it sounds rather clunky and ruins the impact of the song; for me at least, the crowd seemed to react enthusiastically enough though. Thankfully All That Jazz is simply epic, Sergeant’s sharp, aggressive playing slaughtering everything in its path and Happy Death Men is astonishing, it’s final few minutes bringing the opening set to a rather dramatic and powerful conclusion.

The queue for the toilets is quite extraordinary. There are a lot of bladders obviously struggling into middle age but it doesn’t take too long for us all to return to the bar for further refreshment and prepare ourselves for the Heaven Up Here section of the show. Sadly, for reasons best known to the band and official time keepers, Heaven Up Here is clipped somewhat (the last three songs never materialized) but we are still treated to a stunning and quite oppressive Show Of Strength and a wiry and lean With A Hip. The highlight of this section though is clearly Over The Wall, which threatens to run away with itself on occasion. It builds up steadily, enveloping the crowd in an almost gothic atmosphere before the chorus kicks into life and then everything gets destroyed by Sergeant’s savage attack on the guitar. We build up again and a groove comes into it somewhere, drums pound and thump, guitars trade licks from either side of the stage and a whirlwind of noise builds up inside the Paradiso before Will and Macca take their turns in pushing things to their ‘logical limit’ and the whole thing knocks everybody in the crowd senseless. There’s almost a dramatic pause at the end of the song where everybody takes a deep breath before responding enthusiastically. Wow, that was powerful!

It Was A Pleasure simply can’t compete with its predecessor but A Promise keeps us singing and dancing and Heaven Up Here itself is a wail of clashing guitars and frantic drums just as it should be. The Disease throbs with intensity and grandiose pomposity. It’s so overblown it borders on the realm of the ridiculous without ever falling fully into it and it leaves well before it outstays its welcome, leaving All My Colours to round off the second set in a dark, gothic fashion.

Hearing albums played in order can often unbalance a show somewhat. For me, there were two clear peaks tonight, with Rescue and Over The Wall but cleverly the band saved a triumphant encore section for last, just to send us off into the night on a high.

Killing Moon. The Cutter. Nothing Lasts For Ever. Lips Like Sugar.

Call them a nostalgia act at your peril. I’m not even the token Bunnymen fan at Incendiary but, in my opinion Echo & The Bunnymen’s first two albums sound as aggressive, otherworldy and brutally powerful as they did twenty odd years ago. Tonight the band sounded vital and important, brimming with piss and vinegar and although they sent many a middle aged man home happy tonight this was no greatest hits cash in. Crocodiles and Heaven Up Here kick seven bells out of almost any post punk/indie/alternative album released in the past decade, possibly two. On this form, they’re not just a fond memory, they’re an essential listen. Oh how I wish there were more like them.