This time around, blessed with an armoury of Gothicke, metallic pop and blessed with a real shit-kicker attitude – that swagger that only provincials have when they feel confident – the band delivered in spades.

This time around, blessed with an armoury of Gothicke, metallic pop and blessed with a real shit-kicker attitude – that swagger that only provincials have when they feel confident – the band delivered in spades. 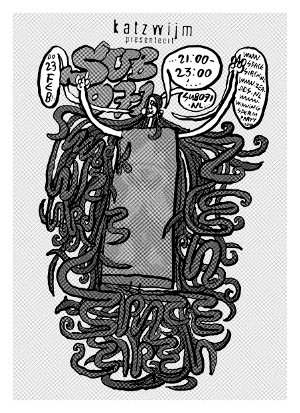 Old Glasgow met new Glasgow in the SUB 071: Smack Wizards, softly spoken and serious came up against a living breathing exponent of the Gorbals way of living. Despite an exchange of Irn Bru the two sides of didn’t click. Parliamo Glasgow still rules it seems. Still, Smack Wizards would survive this encounter as you’ll find out later, but first things first. Incendiary were there to see the mighty Space Siren play their new LP and watch the ever entertaining Zea knock out his

Zea was up first: Zea is the moniker for Arnoud, singer of The Ex. His quizzical, clever songs are always worth hearing, especially live, as he throws a lot more into the experience. Daft stories abound between tracks; the patter to one song about his aversion to spicy food brought up the unedifying mental picture of Arnoud’s head changing colour to beetroot red and swelling up like a football… fair enough. However it must be said that his thoughtful, rhythmic groove managed to do what no-one else could in the building– avert all fear of proceedings being subject to a Glasgow-style disturbance. From being heckled at the outset Zea was able  to earn the moniker, “mah wee boy”: a triumph.

Then we had Space Siren, who are on the cusp of releasing their splendid LP, Mr. Wagner, Please Give Us A Call. This band has come on leaps and bounds since I first saw them, though I have to say in their defence that they are one of the few bands who have always been able to really, really play well. No, with Space Siren it’s always been a matter of settling down to defining their vision and spreading their message – a task that has made their previous live gigs come across as awkward or unsure in Incendiary’s eyes.  This time around, blessed with an armoury of Gothicke, metallic pop and blessed with a real shit-kicker attitude – that swagger that only provincials have when they feel confident – the band delivered in spades. With the noise clattering round SUB’s confined space it felt that Space Siren had their audience down by the throat.

The reason? Their incredibly powerful new songs, which have a druggy, disconnected feel to boot. They sound giddy and clear-eyed and re coated with a metallic sheen not to mention being guided by an unashamedly feminine point of view. On the night, the singles Oh My God, Someone Killed Kelly and Off With Her Head were marvellous staccato bursts of agro-industrial noise which made us think of some of the more sticky, sensual moments from mid 80s Fall LPs (This Nations Saving Grace, especially, I don’t know why for sure), or The Telescopes. But The Telescopes drowned in a huge maelstrom of choppy, iron grey reverb… now think of that… Despite the mid ‘80s references being chucked about by your reviewer, Space Siren are just too singular a proposition to be lazily categorised; their vibe is a sometimes blatant mix of brusque no-nonsense noise and a dreamy sensuality that quietly gets under your skin. And they could be on the verge of something pretty special.

Last up were Smack Wizards who were a strange but appealing proposition. Two lads – who must on this sighting be brothers and no I can’t be arsed checking on the Net – took bass and lead duties whilst a determined looking girl drummer kept them in check. She was the key to their organic, undulating Muse – one which looked to marry two great Glasgow traditions – unruly pop (as practised by such imps as The Fire Engines) and the bluesy West Coast rock that TFC and countless bar bands have traded in. At first we got the pop end; the two lads hunched over their guitars seemed intent of doing a Stars on 45 take on Postcard records (there is a take on this exists on a long lost Orange Juice Peel Session btw, no shit Sherlock). Later matters got looser and increasingly jazzy wig outs ruled the SUB sound-waves. They are different; on this evidence don’t seem to be that arsed about anything but exploring their own sound which of course is grand.

Later I got given a tape and somehow staggered home happy. SUB still rocks.