Everything Schellinx does is playful to a degree, the heavy stuff is there of course, but that’s down to you to dig deep. He is adept at setting up preposterous ideas and pulling them off…

Everything Schellinx does is playful to a degree, the heavy stuff is there of course, but that’s down to you to dig deep. He is adept at setting up preposterous ideas and pulling them off… 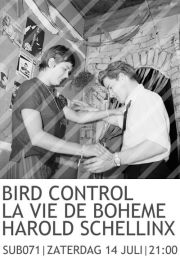 A brilliant night at the SUB, and a strange one, too. Strange in the sense that we got something different, and more, than billed and brilliant in that one of the heroes of the Dutch counter culture would be pitched into the strange restricted gloaming that is SUB071. Owing to this we had some of the heavyweights of the Dutch underground, Minny Pop Wim Dekker and journalist Peter Bruyn, and a hell of a lot of well-appointed Haarlemse types (nice people, Haarlemmers, and always welcome in the hobbit hole of SUB). Yours truly was given bar duties a task which, (we like to feel at any rate) beautifully dovetails the work of eager music reportage.

First up was a change, instead of the advertised Bird Control we had a joining of forces between the rump of the ‘Control (I’ve not seen them, but they describe themselves as “four young men with a passion for music from the late sixties and early seventies”) and La Vie de Boheme – righteous ambassadors of the Gay and Lesbian sound in Haarlem. An experiment would be tried out, named “Monotoon”. I’m sure your translating skills don’t need any push to work out what Monotoon would do, and for a good half hour the assembled musicians did just that. Listening to variations on a single note is a challenge, both for audience and players. Both are waiting for release whether out of tension, boredom, nerves or curiosity. And to be fair to the Monotoon project, this large bunch of musicians held the suspense well, created a mind map of sorts for the audience and allowed a good degree of tonal and textural variation into the mantra, especially by the end. We got the odd whispered incantation, Cosmic Jokers style, too.

Then we had Harold Schellinx, Young Lion, Minny Pop and uomo universalis; (what we Brits used to call an “all-rounder”). During sound check, Harold had accumulated a whole pile of stuff – mostly rubbish or detritus (bags, beer cans that kind of thing), and stuck it on a table at the side of the tiny stage. Things happen in SUB, it’s not wise to question what was going to materialise. All came clear soon enough: using most of Monotoon to create a subtle, atonal backing, Harold started chucking his objects trouvé around the floor whilst yelping out a rap about all the stuff he has to deal within his life. It may sound just so-so on the page, but being a spectator to this mini theatre was great. Everything Schellinx does is playful to a degree, the heavy stuff is there of course, but that’s down to you to dig deep. He is adept at setting up preposterous ideas and pulling them off: some of his readings during the ULTRA tour were the same crazy amalgam of aural-visual whims and fancies allied to a deep knowledge of what makes us tick, creatively.

After this invigorating blast (lasting only 5 minutes or so) we got La Vie de Boheme, an outfit who unashamedly trade in a cabaret vibe not heard in NL since Johnny Jordaan wooed bobby soxers back in the 50’s. Their leader Ruben is a charismatic chap whose melancholy soul-searching and hangdog expressions belies a very cheeky wit. The band makes barfly music, reliant on a turn of phrase or a simpatico atmosphere to bring it to life. Their songs are well crafted, and played in a delicate, sensitive manner: there’s nothing too energetic – they are reflective torch lit serenades, very like the things Little Annie does. On what I saw, I get the feeling that they currently exist best as a live outfit, something else would be needed to capture that fug of despair that the songs sometimes have to negotiate. The well of loneliness indeed.

Post gig, a mild happiness was evident. People chatted on, trains were missed but no-one complained too much. Bar duties resumed and Incendiary found themselves (possibly for the only time ever) the centre of well -meaning interest. How many more top nights can the SUB churn out?