Moshing at Space Siren? A month ago that would have been unthinkable. Now it’s as if that confidence in celebrating something good hit the audience foursquare.

Moshing at Space Siren? A month ago that would have been unthinkable. Now it’s as if that confidence in celebrating something good hit the audience foursquare. 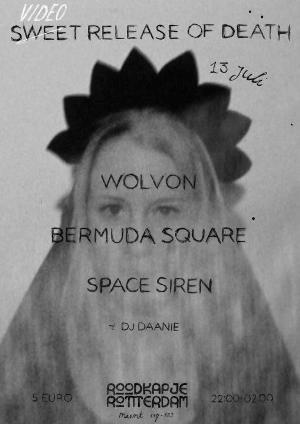 It’s at times like this when you realise just how cosy the alternative scene can be in Holland. Or how lazy we are, who knows? Incendiary turn up to see lots of friends we’d seen in Groningen ready for a video release by Sweet Release of Death. And a whole set of Rotterdammers; Rats on Rafts & their itinerant bunch of art-school fans, No Future Nu writer Leonor Jonker, Dagmar from AC Berkheimer, and moonlighting Amsterdammers, Lili & Jaap from New YX. This list could go on, but this is a review not a name check.

After this we had Sweet Release of Death presenting their splendid video for their song Haze. We’d previously caught them up at Lepel in Bromingen, where they sounded scuzzy and rich and more interested in making a noise for noise’s sake. Here the acoustics gave their feral rock and roll a harsh, sharp edge which suits them, as they need that acerbic and dissecting sound to balance out their relative lack of interplay on stage. They are somewhat gauche at times; studious and almost resentful of the audience’s presence; their thrashing strumming, buzzing sound created a noise which I could vacuously compare to a very, very angry Wedding Present. The singer is certainly big on scornful looks and has something of an Austerity-era proselytizer about him, a modern day Buffcoat who’s just got into girls… But they have really good songs, such as Seconds, even if these tracks stick doggedly to a proven template. They just have to watch getting too mannered or hide-bound. And we like them; we just need to see them a bit more often.

More drinks (inevitably some form of biological beer, made by happy yeomen no doubt) and then WOLVON. Now WOLVON have one great trick and that is to fuck up before they start, (something inevitably blows up or a piece will fall off some instrument), but then rally round and create a storming life affirming noise. This time singer Ike broke a string, meaning a hasty swap for one of Space Siren’s many axes, but what the heck, once into their stride it doesn’t matter. WOLVON can summon up a mighty sound in a cupboard if they so willed it. They are getting closer and closer to making the kind of intricately interwoven, abstract free rock rumble that Ash Ra Tempel did – OK, albeit without the long trip outs and brain melting percussive pounding drumming from Klaus Schultze – but the more I see them the more I know that the comparison isn’t a bad one. WOLVON have more of a jazzy, math rock, Star Sailor vibe than their Kraut heirs but it is still a mighty noise they rustle up. The band seems to be enjoying the knowledge that they’ve tapped into an audience too; people dig this explosion of good time free noise and WOLVON play off it. Ike is content to run into the audience, his long shanks kicking out at people, using them as a prop, falling over, howling, you name it… Bassist Ruben anchors the other crazy, Bram, into place. You get the feeling that one day Bram (a drummer who looks like he’s channelling Keith Moon AND Animal) will run out of the room naked and gibbering, such is his evident enjoyment in his task. All too soon it’s over, but the audience are buzzing, if a little deaf.

More organic beer and it’s time for Space Siren. Now that WOLVON had shook the foundations Space Siren’s task lay in picking us up again and bearing us off to the sunlit uplands. Their record, Mr Wagner Please Give Me a Call is an undoubted classic, the strength and moral fibre in these songs shines through stronger each time you hear them. There’s a transformation about them as a live band too, gone is the awkwardness, the unnecessary bristle cloaking the shyness, the phantom Gothic menace they toyed with. No, they’ve clicked, they’ve got their groove. The searing noise and expressive rhythm section work outs are no longer cloaks to hide any frustration but a sort of counter-point to their dreamy melody lines.

This confidence has done a hell of a lot in terms of showing off the prismatic elements of their sound. At times Gwen’s voice cut through the interplay of guitar and rhythm section, it absolutely soared, and it visibly moved people. I once heard Corno Zwetsloot describe her singing as that of an angel and on this night I finally saw – or heard – what he meant. It’s the bedrock of their sound. Just goes to show that confidence is a double edged sword it really is. All too soon matters were at an end: the last track, their great cover of D.A.F.’s Verschwende Deine Jugend was greeted with a moshpit. Moshing at Space Siren? A month ago that would have been unthinkable. Now it’s as if that confidence in celebrating something good hit the audience foursquare. People threw others about, yours truly indulging in the sort of idiot capers long abandoned in the late 80s. The games’s up, the band’s muse is unmasked and radiant in appearance, they enjoy playing their music and we all know what they do is of high quality.

After this it was more prattle with the Subroutine “in crowd” (whatever their protestations about being eigenwijs, and outsiders, I think the chaps at that label have to accept they’re the ones leading the charge in Holland now), more organic beer and a stroll through the centre of this kicking city.