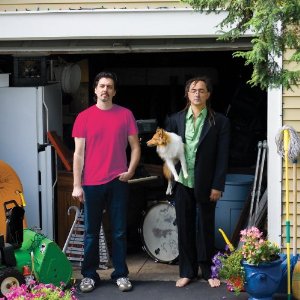 The following is written on the homepage of Dots Will Echo’s website.

“The goal is to keep the bewildered herd bewildered. It is unnecessary for them to trouble themselves with what’s happening in the world. In fact it’s undesirable – if they see too much reality, they may set themselves to change it.” – Noam Chomsky

If that doesn’t make you smile, then please walk away now and listen to something less interesting instead. Dots Will Echo are bonkers. Deliriously, delightfully bonkers; in the same way that They Might Be Giants are. Musically, they’re a heady mixture of bad hip hop, clumsy indie rock and absurd pop. They sound like they’re not really in control of what’s going on around them, songs seem to kind of arrange themselves in weird structures that don’t feel too sturdy and reliable and yet the whole album – all twenty three bloody mind altering tracks of it – is an absolute thrill to listen to. Yes, it’s kind of all over the place but that’s where most its charm lies. Take Anime, which sounds like someone trying to write a Guided By Voices song while listening to Dinosaur Jr on their headphones. Or Be A Friend, which sounds like early Mercury Rev trying to write a Bob Dylan song. In fact, take anything on this colossal album and you’re in for a treat.

The thing is, it may sound quite ramshackle but when you give it a bit of time, and get over the immediate “what the fuck” feeling you get from it, you’ll realize that there are some bloody great little songs on here. I’m a Monkey is excellent. Shitstorm is a lot of fun, Who’s Left You Here is delightful and The Future is just – well it’s just absurd – but that’s fine too.

All you really need to know is that your new favourite oddballs have arrived. They aren’t quite like anything else around but, like They Might Be Giants, fitting in should never be part of the plan.