Four weeks of listening to my entire library has made me realise that I’ve got so much shite in my iPod that it should be called an iPotty.

Four weeks of listening to my entire library has made me realise that I’ve got so much shite in my iPod that it should be called an iPotty. 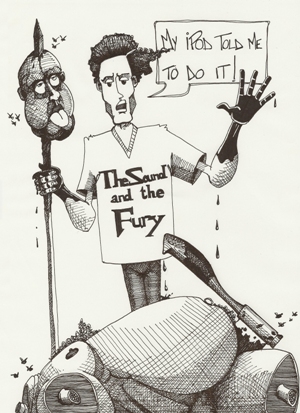 Making decisions is hard. Shall I wear my shoes or sandals? Greek or Caesar salad? Maybe Dave is right, he’s had enough. The one I struggle with the most is: what music fits my mood? I suffer from neophobia (although not when women are concerned: the grass, or more specifically the bush, is always greener, or fingers crossed, shaved completely) so I opt for what I know. This means my favourite playlist: a radio request programme with one listener, me, so it’s always my tune. Even the most cherished album contains challenging tracks, as anyone who has managed to get to the end of the Goombay Dance Band’s Sun of Jamaica will confirm. (It can’t just be me, can it?)

I also have a very itchy index finger – my career as a sniper was always doomed to failure – and skip anything I don’t like. Even though I own thousands of songs, I only play three.

Rather than enhancing my life, music was complementing its banality. I didn’t even listen anymore. It was background noise, washing over me, muted and dulled by repetition. The Dead Kennedys had been transmogrified into Richard Clayderman. After years of violently championing the challenging and the obscure I’d reduced it to Muzak.

According to the Theory of Evolution, as I understand it (which, given I’ve never studied it, isn’t much: so compared to the average fundamentalist Christian my knowledge is encyclopaedic), if that fish hadn’t got bored swimming round the same old pool, talking to the same old piscatorial punters, and checked out the bank we’d never have developed. The pool I inhabit is Hartlepool, the Jewel of Tees Bay, and I was in a similar rut. If I was to evolve, something had to change.

After mulling the situation over, I realised that songs are like children, you can’t have favourites. Not without terrible repercussions. In my Uncle Brian’s case it meant desperately struggling to get the bloody key into the ignition, while his heavily medicated son shuffled down the drive, holding his sister’s head in one hand and a machete in the other, muttering, ‘who’s you’re the chosen one now daddy?’ In mine, some of the songs on my iPod weren’t getting the love they deserved!!!!

The solution was simple: put my entire library on shuffle, and refrain from skipping. Rather than thinking, my musical selection would be determined by an incredibly complex algorithm. My collection had taken over thirty years to amass, and it was time to enjoy it all. To literally face the music. This wasn’t the most dramatic proposal. Not like raising the legal limit for abortion to 18 years after birth, or going out without my earphones on and actually interacting with anyone, but it certainly had an immense impact. Every time I slip on my earphones it’s the beginning of an amazing journey. With every ‘new’ song the memories come flooding back: so many cellars; so many pleas; so many holes; but thankfully no witnesses, and very little corpus delicti. I’ve made more interesting – and a lot less pungent – discoveries than a south London policeman searching an attic for the third time.

It is amazing how many songs I’d forgotten completely. How could Minor Threat’s ground-breaking Straight Edge have slipped so effortlessly from my mind? Initially, it was never off my turntable. I was even inspired to embrace the lifestyle it endorsed, and remained sober for the rest of the day. These rediscovered songs are like letters from an old sweetheart found in an attic. A poignant reminder of a love that burnt so brightly, so intensely, but somehow faded, never to be thought about again*.

Occasionally, I have no idea who or what is playing. Someone more self-aware might deduce that they buy far too much music, and should listen to what they’ve got before purchasing any more. I treat it like a personal pub quiz. One I always win. Well, more often than not, there’s some real esoterica on there. John Peel would struggle.

Playing songs in this manner can enrich your life in so many other ways. Occasionally it provides the perfect soundtrack for your life. An unexpected counterpoint, that proves startlingly illuminating. Unfortunately, the only time this happened to me was when the song Philadelphia started to play as I left the blood clinic. The results were negative, but it was a nervous three minutes fifteen seconds. However, even this terrifying episode proved auspicious, as I realised that my iPod might have the potential to help me resolve moral or ethical dilemmas. Rather than flipping open the Bible, I could press play, listened to the lyrics and see if they were relevant.

On the whole, they aren’t, but at least I get to listen to some quality music rather than reading a lot of nonsense about how people who have flat noses, or are blind or lame, cannot come to an altar of God (Leviticus 21:17-18).

I also realised that I was running the risk that when I’m next debating, whether I should listen to the voices in my head and kill another prostitute, that I’ll press shuffle and Kill by Alberto y Lost Trios Paranoias will start to play. Is ‘my iPod told me to do it’ an acceptable defence?

Four weeks of listening to my entire library has, overall, made me realise that I’ve got so much shite in my iPod that it should be called an iPotty. A spectre is haunting my music… the spectre of mediocrity. Through neglect and acquisitiveness, my collection has got fat and bloated like the swollen, distended bellies of the bourgeoisie. Action must be taken. Drastic action. The Great Purge must begin, and, from the ashes, a leaner, stronger, iPod will emerge. One where every song is equal, but, more importantly, one that will not contain any fucking…. U2!!!!! (sort it. – ed)

Next month: The playlist pogrom

*It’s not true. I think about you every minute, of every day, Joanne. She meant nothing to me. Please come back. I love you. I’ve changed, and am no longer contagious. I have money. Well, as long as you’ve got an old pair of tights, a sawn-off shotgun and are willing to drive I can get some. We were meant to be together. My iPod has decreed it.