Intelligent, beautiful, exhilarating and overpowering: a description of both America the country and America the album. It is clearly Deacon’s most successful work and hopefully presages even more impressive things to come.

Intelligent, beautiful, exhilarating and overpowering: a description of both America the country and America the album. It is clearly Deacon’s most successful work and hopefully presages even more impressive things to come. 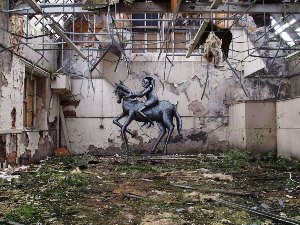 A few wags have been comparing Shields, the latest album from Grizzly Bear, with the work of Coldplay. I’m not in a position to compare the two myself but I would have thought the comparison unlikely: surely Coldplay have better tunes? In the US indie pantheon it’s clear where most of the band’s strengths lie. Fleet Foxes bring the harmonies, Animal Collective the textures. Vampire Weekend have the tunes and Grizzly Bear…have what, exactly? They have always seemed to be a band easier to admire than love. They make interesting, complex music but there has always been something lacking, and it is not just the tunes. Part of the problem, perhaps, has been their tendency to self-sabotage. To break down a song just as it got going, to head off at a tangent, or to let a song drift away to a hazy and indeterminate end. Shields, to be sure, is not free from these issues but it is probably the first truly successful Grizzly Bear album. At their most placid (What’s Wrong) their version of chamber pop sounds not unlike Cardinal once did twenty years ago. No crime, to be sure, but something of a waste compared to what their talents can assuredly create. And what they can create is A Simple Answer, a rollicking rock song, complex and yet great fun. Of course, being Grizzly Bear the last third tails away, but still: it’s one hell of a track. As is Half Gate, another great driving rock-pop song. The sophisticated song-writing and instrumental craft underpins these songs rather than, as sometimes seems to be the case, ornamenting relatively weak songs. I’m still not sure what Grizzly Bear bring to the US indie party: perhaps it is something knotty and cussed. A refusal to take the easy path, and a desire to create something that demands many listens. And that’s probably no bad thing.

It’s pretty clear what Dan Deacon brings to the party: pounding beats underpinning (and sometimes overpinning) a sophisticated sense of song-craft. Previous album Bromst was in pretty much equal parts brutal, bonkers and beautiful. It’s brilliant electronic mayhem has been diluted slightly on new album America, a calmer and more serious work, but the album is just as strong, if not stronger still. It opens with Guildford Avenue Bridge, a clattering behemoth of electronic beats that gallop along, fall over and get back up again. True Thrush tempers this, with singers, a chorus and even something of a tune. It’s almost pretty. Lots pounds and bludgeons, almost metal-like in its ferocity. Pretty Boy is actually quite pretty – the central tune resembles the love theme from Twin Peaks. There’s plinky plonk piano and, of course, pounding drums. However, it finishes almost as a chamber piece with piano and violin. Crash Jam quickly breaks the spell: discordant electronic noise morphs into a brilliant clattering whoosh of a track. Side 2 of the album is rather different: a suite of songs based on USA. Opening with pensive strings, USA 1: Is a Monster seems initially to be cut from a very different cloth indeed but after a couple of minutes drums and electronica kick in and build to an almost overpowering din. The brass and strings manage to remain cool as they are assaulted by the drums and electronic squiggles. This mix of ‘proper instruments’ and electonica continues throughout the second side. It’s a difficult thing to pull off too, and Deacon manages it with aplomb. The beats and noise are still there and the strings are not there to sugarcoat; they are integral to the sound. Intelligent, beautiful, exhilarating and overpowering: a description of both America the country and America the album. It is clearly Deacon’s most successful work and hopefully presages even more impressive things to come.

Brief Note 1: Chily Gonzales has followed up his orchestral rap album with the second volume of his solo piano works. And very good it is too. Perhaps a little more playful than Volume 1 it still consists of a series of miniatures in the style of Satie.

Brief Note 2: Novelist Jonathan Lethem’s addition to Continuum’s 331/3 series of books on ‘classic’ albums is Talking Heads’ Fear of Music. It’s not a history of New York at that time, nor is it a history of the band. It’s not book looking at the recording of the album. Rather it is Lethem’s ruminations on the album itself, track by track, and often in painstaking detail. It’s as much a book about Lethem as it is about the album. Oddly enough this was also the case with the other major interrogation of the album: Lester Bangs essay from back in the day (which can be found included with the recent Chronology DVD). Lethem is no Bangs. In fact Lethem brings very little in the way of illumination or insight. Rather, we get a lot of cleverness for its own sake mixed up with some banal reminiscences. Much better to root out the Chronology DVD, read the Bangs essay and watch the South Bank Show on the making of the album (found amongst the extras). Don’t worry – there’s no Melvyn Bragg on it.

Brief Note 3: A thoroughly enjoyable album by Johnny Mox has come my way, We=Trouble. I’ve not heard of Mr. Mox before (actually Italian Gianluca Taraborelli) but his album is certainly impressive and, in a way, a companion piece to the recent Guido Moebius album Spirituals. Most of the tracks are built up of vocal loops and can be split into two categories, those that start slowly and those that just get stuck in. The title track is one of the former and is a catchy little number. The vocals are sweet and, as mentioned, spiritual in sound. Over the course of the track they gradually become overpowered by white noise and electronic dissonance. Oh Reverend is not dissimilar in style although it is augmented with a catchy, bouncy guitar. Of the more urgent, almost punk-like tracks (such as All We Ever Wanted Was Everything), the vocals take on a hectoring, almost MES-like quality. It’s a curious mix of styles but an interesting, even beguiling one.

Finally a new Fonal album. I’ll repeat that: a new Fonal album. Hurrah! Fonal albums never disappoint and rely on a quality control that (unlike the still wonderful Domino) cannot be bought. Fonal will, I assume, forever release records by unknown Finnish artists who, wonderful though their music is, will never have a cat in hell’s chance of becoming a financial pleasure for label owner Sami Sanpakkila. No, Fonal is a labour of love, a treasure-trove of wonderful music destined, sadly, never to be heard by more than the lucky few. Latest artist on the roster is the bizarrely named Barry Andrewsin Disko and his album, Kuka Siella, is of course a cracker. Given the artist’s name the album features bizarre and yet perfectly accessible pop music. What makes it bizarre? Well it is not the lyrics (though it might be if I understood Finnish). It’s not the instrumentation nor the structure of the songs. No, it is that vital Fonal attribute of wooziness. The album slips and slides around, the keyboards always a little tiddly. The pace is for the most part a gentle trundle which means that when it does come to life, as on the track Viime Yona, it comes as quite a shock. But then halfway through the folk-polka entropy kicks in, bringing the album back to its more usual sleepy state. Now then, when can we expect the next album from Paavoharju? (thinking the same – Ed)