Songwriter, craftsman and curator, a dark horse by name and by nature, this alnum’s unlikely to bring Cheval Sombre out of the shadows but it may just extend them into a few more people’s record collections.

Songwriter, craftsman and curator, a dark horse by name and by nature, this alnum’s unlikely to bring Cheval Sombre out of the shadows but it may just extend them into a few more people’s record collections. 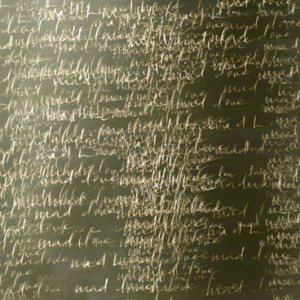 If there are names in an album credits guaranteed to catch the attention of this corner of Incendiary Towers they are Pete “Sonic Boom” Kember and Dean Wareham. The addition of Wareham’s longtime partner and musical collaborator Britta Phillips, plus Andrew VanWyngarden and Ben Goldwasser (AKA MGMT, AKA the best example we can think of in recent years of a band completely fucking off a lucrative mainstream fanbase in favour of following their own Kember-inspired path) and you’ve got something bordering on a space-dream supergroup. And at the centre of this glorious spiral galaxy is the mysterious figure of Cheval Sombre, a published poet and musical visionary from somewhere near New York.

His songs are fragile, spectral things, and it would have been all too easy for such a stellar cast to mask their quite intimacy – but these are not just great musicians, they are music lovers, and they understand. The label Sonic Cathedral may have been named in reference to the huge great walls of sound of the shoegaze era that inspired it, but here the religious analogy extends to reverence. This is very much Cheval Sombre’s album; they simply enhance it with lovingly designed colours and textures.

The result is perfect three o’clock music – either of them, best heard sleepwalking through a fuzzy afternoon or burning the late night candles. It takes in gentle, woozy country (the oddly low-key opener Someplace Else) and hynotic shimmer (Couldn’t Do, with its featherlight guitar, drones and what sounds like ancient organ pipes). It wanders close to the quieter end of Spacemen 3 – and indeed closer still to the recent solo work of another ex-Spaceman Sterling “Rosco” Roswell – on The Nearness Of You, a song originally written in 1938 by Hoagy Carmichael that’s previously been recorded by artists as bewilderingly diverse as The Glenn Miller Orchestra, Shirley Bassey, Rod Stewart and (I am really not making this up) Sheena Easton. And on Once I Had A Sweetheart it explores that beautiful thing that happens when a traditional folk melody with its haunting intervals finds its way into the hands of a stargazing dreamer.

It’s rare you find a modern day original artist album with three covers on it (the third, The Walkmen’s Red Moon, is something of a weak link here but still serves to provide an interesting and unexpected reference point) and when you think about it that’s actually a bit strange, isn’t it? Hundreds of thousands of songs exist and there must be so many lost wonders buried in vaults, stuck away on dusty seven inches or even sitting bored on well known albums waiting for someone to weave them new clothing. Somewhere in rock’n’roll’s obsession with authenticity the art of digging for treasure got sidelined into a niche of Finders Keepers compilations, music put on display as opposed to taken for a spin – but once you’ve realised that’s ridiculous, choosing songs to cover is an art in itself. Peter Kember of course knew that all those years ago when the Spacemen made Red Krayola’s Transparent Radiation their own, and overall this album is a direct descendent of that moment: where the bright heat haze of sixties flowerchild happenings meets the shadows of strung-out eighties space-drone, the dark and light entwining around bluesy bent guitar tones.

A photocopy of a brief hand-written accompanying at least the promotional copies of the album would seem to confirm this idea: “the songs, how they came to be, the conception, how everything was recorded, everyone involved, the care with which we all handled it – it’s all rendered me a bit speechless”. Songwriter, craftsman and curator, a dark horse by name and by nature, this album’s unlikely to bring Cheval Sombre out of the shadows but it may just extend them into a few more people’s record collections.