What we couldn’t handle was the end, where the previously polite and sedate chair donned a rubber face mask: one which was a queasy mix of the features of Silvio Berlusconi and 70’s snooker ace Ray Reardon.

What we couldn’t handle was the end, where the previously polite and sedate chair donned a rubber face mask: one which was a queasy mix of the features of Silvio Berlusconi and 70’s snooker ace Ray Reardon. 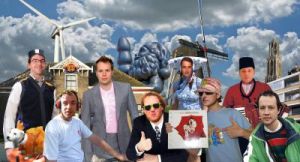 A cold, dark and dank Friday night in Leiden. Coming after the night before, (Popronde Leiden) I have to admit that I was in no mood to carry on carousing, good bands on offer or no. I wanted my bed. Still, a momentary flash of lunacy and an inability to say no briefly interjected, and I found myself trotting down to see Rosa Ensemble who were putting on a show about, ahem, “neglected” Dutch folk music at the Meet and Greet. Why? Yes, I asked myself that too.

Meet and Greet’s a cool proposition: an old corner shop converted into a house and then turned over to all kinds of art projects, it’s what the Dutch call a buurthuis, what we’d call a (mini) community arts centre. Normally the shows here are sedate, slightly highbrow occasions with the accent on the quieter aspects of modern music. Occasionally (as with Greg Haines and Machine Fabriek/ Kleefstra shows) there have been some magical nights, but I bet they’d have a job in thinking of one that was as off its bonce as this gig. Now I’d heard one of Rosa Ensemble’s records previously, and whilst admiring it, and even being tempted to review it I stopped short of doing so; mainly because it was that bit too dry, a bit too academic for us, when all was said and done. And talking before the gig to Subroutine’s Koen ter Heegde, (moonlighting as the tour manager cum promoter), didn’t raise any hopes that the band had turned into a Stooges tribute act. On entering the venue and seeing a mini a sort of mini puppet theatre with a backdrop – one littered with cut-out characters – my heart sank some more. Were we in for a night of force-fed whackiness?

Yes. We were. And whaddayaknow? It was great. The five band members (narrator-come-puppet manipulator, trombonist, guitarist, double bassist, and bass clarinettist-come-bloody big wind instrumentalist), all soberly dressed, ran through a set of inspired piss takes on Dutch folk, Dutch towns and the way Dutch life is regulated by shadowy social committees and endless etiquette. The audience, initially nonplussed and slightly nervous, slowly got into the gently unfolding lunacy in front of them. Permission was even asked to clap. This was granted by the chair. We had solemn clog stomping. We were amply instructed by the visuals (projections from the puppet theatre, beamed in a modern manner, onto the wall). We were enlightened by a diorama on the building of an office space in Pummereinde. Folk songs about running to catch the bus in high heels, or the propulsion of Utrecht’s Dom into outer space were expounded, with copious notes and polite explanations. We examined our programmes. We began to find a sympathetic accord with what was happening in front of us. And with the odd bottle of Grolsch to hand, we found ourselves coyly smiling.

As to the music: well… it veered from a sort of deliberately cack-handed Beefheartian grumble (think Dali’s Car being played at a command performance for the Dutch queen) to a polite take on glitchcore via a bastardised cocktail party jazz. Things nearly descended into a sort of underpowered cabaret at times: a sort of soundtrack for a 1970s TV play at others. It was all fine and Incendiary could handle it. What we couldn’t handle was the end, where the previously polite and sedate chair donned a rubber face mask: one which was a queasy mix of the features of Silvio Berlusconi and 70’s snooker ace Ray Reardon. When Silvio Reardon let off a load of confetti to end the night, we were – to put it mildly, pretty relieved.

But what unexpected fun!