The basis is friendship and the fact that we see people getting pleasure from what our friendship has produced is special to us. Friendship is the basis, the fundamental element in Nouveau Vélo. But there is a lot of separateness about us. Eenheid.

The basis is friendship and the fact that we see people getting pleasure from what our friendship has produced is special to us. Friendship is the basis, the fundamental element in Nouveau Vélo. But there is a lot of separateness about us. Eenheid. 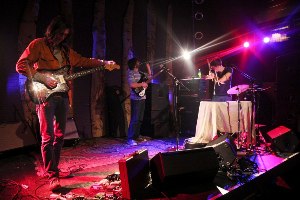 It’s wet and we’re hanging around a pub in the outer reaches of Utrecht’s binnenstaat waiting for the lads from Nouveau Vélo to turn up. The band is on the cusp of going places; whether propelled by their own roots-up following or whether in part due to the kerfuffle that started when they played an extraordinary show at the ULTRA south gig back in March 2012. Along the way they got a chance to play Popronde, which is where we finally – despite us putting them on at Incubate in September of 2012 – got a chance to have a beer with them, (they like a pint, make no mistake). They are very much a gang, though with conflicting personalities, at least outwardly. Bassist Bart is very much the boss in terms of getting things sorted whereas singer/drummer Rolf is often busy contemplating his inner muse. Niek, sanguine as ever, is primarily concerned (as all guitarists are) with amp and pedals. Once sorted, we adjourn to a noisy terrace and have a chat.

IN: I was going to go back to March (2012) – the first time I saw you, at the ULTRA South gig at TAC. Joep van Son from the Sugarettes said to me, when we were putting the ULTRA Eindhoven show together, he said “Richard you’ve gotta go and see this band”. So I did!

R: That was the Minny Pops thing, the first time you’d heard us?

IN: Yeah… to be honest I don’t think anyone had heard of you who was in that room – outside of your close pals. Anyway I’m interested to know how you got to where you were back in March, because it seemed to me you were a fully formed band; 2 good EPs to your name…

B: The first EP really was more of a demo, I think we did it for the Popronde 2010 I think, we did it in a cellar; we have a practise cellar.

IN: So all a bedroom thing?

N: A cellar thing! (Laughs). All in our cellar. Near our (old) drummer’s place there’s an allotment and there was a sort of cellar and we just practised and practised there before we recorded any material, to get good more than anything… and to find out what we liked, and how we really liked to come across. It was all about perfecting the band’s sound. We also decided that we would write and play our own songs in there. And the result of that was the Courgette demo in 2010.

B: And after that it was really just a case of collecting the material for the second EP (Moestuin 2011) and we just stuck it up on the net. We got a gig from it from 3voor12 Eindhoven I think, nothing more.

R: Yeah I’ve lived there for some time… it’s okay. But we’re all from little places near Helmond.

IN: Does that make a difference you feel?

N: (Adopts a thick accent) “Ugghhh…. wij komen uit de platte land!” (Laughs)…. ach you know what it is, we all come from small villages and maybe there’s little else to do. It was an advantage because there’s no hassle – every Saturday we got together and had a coffee or a beer and decided amongst ourselves what to do or what was good. And sometimes nothing happened and sometimes we worked really hard on getting things down on tape, you know? And it was a good place to try out new equipment or weird sounds. But in the end, there’s no pressure apart from pressure from yourself.

R: And anyway we didn’t know anyone else. No-one cool, at any rate (laughs).

N: I remember we had a pal in to mix the first EP, and after two days of the drums sounding like shit we decided to do it ourselves – it was like a little club we had going. We always had doubts if it was any good, but people seemed to like it and now we’ve got more of an idea of what to do. Just like farmers growing things (laughs).

B: I think we didn’t have too many doubts because you’re not in a studio where people are telling you to do it differently.

IN: The old polderbedrijf mentaliteit eh? As an Englishman I find that interesting in that lots of people in Holland feel so comfortable working on their own or in a defined little group.

B: Yeah I can imagine where the UK is different because there’s a scene and everyone’s interested in what others are doing and a lot of people know each other… Well we know some bands but they’re all shit (laughs).

R: We’d go to Eindhoven and then go home… we didn’t stick around.

B: The place where we got some attention was at the Effenaar in the small hall, that’s where Joep and Mariska (from the Sugarettes) saw us play, (we were their support I think? I can’t remember) then Joep was asking who we were and said we should get in touch with them.

IN: These things are always on chance. Anyway, I was going to ask you about your music. You’re very open and funny and chatty in person. You make very confident music too, good time, it initially feels like good time music: it’s not overly melancholy.

This question provokes a lot of internal discussion with the band seemingly not able to decide that their music is upbeat in the way I hear it. Frankly the accents get too much at this point and as the discussion becomes increasingly fragmentary I bow out. Rolf steps in to help me.

R: Hmmm. I mean I’m taking issue with Bart here because he doesn’t see us as really melancholy, but I feel there’s something in the darker side to our music. I suppose it’s best to say that we’re happy that people think our songs are cheerful, but they aren’t, not to me anyway.

IN: Still you’ve got melancholy “about you”, Rolf. You can appear very melancholy and dreamy and lost in a world of your own, but the music is initially upbeat.

IN: And the kids who are you old fan base (who turned out in droves when Incendiary put NV on at the Incubate curatorship), they’re not depressing people, they’re nice clean cut kids.

N: Yeah they were a sort of mix of our crowd and the standard student crowd from Tilburg. Think it’s something to do with us being from the area.

IN: So are you melancholy then? I can maybe see a parallel with something like the Beach Boys, bitter-coating the dumb stuff

R: Ach (smiles ruefully, as he is wont to do) maybe.

I get the feeling Rolf could grow into this role if unchecked.

B: Ach you know? We just get together and work something out. We’re not always happy and carefree.

R: Ach I think it’s also to do with the songs, maybe they are different to the way we play them. In any case they are different now, because we wrote them with a drummer (as a standard four piece) but since I’ve been drumming I think they can be interpreted totally differently. And I love it, channelling these songs in this dual role, mainly as the drummer.

IN: You really enjoy that?

R: Yeah! You’ve seen it! You saw how different it was when we had a drummer.

IN: You are an interesting band in that there are these clear aspects to your sound: on one level it’s very enveloping, everyone’s involved, but at the same time it’s music you can dream alone to. A dichotomy. Good point?

B: Yeah we love it. We don’t know why. Something you can drown in It’s more Niek and Rolf’s thing.

R: It’s very open and leaves a lot of room for people to enjoy themselves in, you can see the sound getting bigger and bigger anyway when you play and that comes from the people themselves, they create an atmosphere that lifts the whole thing up.

N: That’s fine but the most important thing with us is that we’re a unit. It’s always very special to stand together as a band on the stage.

B: We’re friends and we made this music as friends, that’s first and that’s what’s made the muci to me. We’ve made our music with a lot of pleasure.

R: The basis is friendship and the fact that we see people getting pleasure from what our friendship has produced is special to us. Friendship is the basis, the fundamental element in Nouveau Vélo. But there is a lot of separateness about us. Eenheid.

IN: Interesting this bunch of bands are all friends: WOLVON, Rats (on Rafts), April, Sugarettes, you… you all get on socially.

N: Outside of a set of bands you mention the rest are little islands. And the media are too.

R: Yeah they’re alien to us.

B: If we get a good feeling then that’s it. We do it for fun and it’s good to have people think like us.

R: Well we met everyone through Joep from the Sugarettes, that all thing blossomed through Joep. And Wymer from Vox too. Another really nice guy. And with bands like April, WOLVON and Sugarettes it’s really nice to feel that there are people like you, who support you and don’t look to compete with you.

B: Is that something of the particular moment do you think?

IN: I do, personally. Certainly it wasn’t about when a band like Nieuwe Vrolijkheid were around. They were very much out on a limb and with very few supporters.

B: Ah I’m not too sure… It’s obvious really, the when you work towards the same idea, go through the same attempts to do something different, have the same fuck you attitude then yeah I think you start to feel an empathy towards the people who work and think like you. Especially if you’re aware of what they do.

IN: On a tanget WHY have you called yourself Nouveau Vélo?

B: Ahahaha! We were messing around it was something and nothing.

R: We always love to play with words and this name came from one of those days when we were sitting around playing with words. And it just came up, I think it was Vélo Vélo at first, and then there was the fact that two of us had new bikes… Bart & Rob… (A lot of laughter)

IN: It all sounds so innocent?

N: Ah, it doesn’t matter… I like it, we all do. It’s a good name. Not too strong, not too butch it’s or but it’s athletic and clean, a bit like Kraftwerk.