Eva Petersen late of Little Flames and Echo & the Bunnymen and Poltergeist’s guitarist Will Sergeant team up to make a set of torch ballads not that far away in spirit to the sort of pop that used to ring out round Woollies as you looked for an airbed.

Eva Petersen late of Little Flames and Echo & the Bunnymen and Poltergeist’s guitarist Will Sergeant team up to make a set of torch ballads not that far away in spirit to the sort of pop that used to ring out round Woollies as you looked for an airbed. 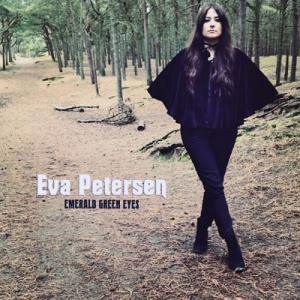 What year is it again? What with the insipid mewlings of bands like Foxygen, the slut of modern garage bands making even worse tracks than stuff on Rubble, and Holland’s very own Jacco Gardner trying (!!?!?!) to appropriate the Bejewel’d Muse of Syd Barrett, there’s a lot of sixties love about that is in serious danger of wasting your time. I’m glad to say this is something else again, and something of a surprise. Eva Petersen late of Little Flames and Echo & the Bunnymen and Poltergeist’s guitarist Will Sergeant team up to make a set of torch ballads not that far away in spirit to the sort of pop that used to ring out round Woollies as you looked for an airbed.

Retro or not, the best thing about this record is its energy and enthusiasm; sometimes it bounces around like it’s on a month’s supply of black bombers. And somehow the two seem to work very well, Petersen letting Sergeant make as much Psyche racket as he wants. Luckily Petersen has enough gumption to use her voice as the velvet glove that hides the iron fist. And the thing is, you wouldn’t want to mess with our Eva: to quote the lines from Happy The Golden Prince, “this is flesh and blood”.

So, a great brassy record this is, filled with the sort of defiant, “laugh at the moon” balladry that normally gets massacred on those cruel music talent shows I’ve been fortunate enough to avoid this past decade. Don’t be Shy is a classic example, with Petersen’s smoky, sometimes cracked vocals, (she has a sultry voice that works best in a mid-range), and Sergeant’s arrangements finding an unusual and unforeseen concord. Elsewhere she can straddle between two stools a bit, but there’s something gloriously imperious about all her declaiming: Too Late For Tears is akin to Elsie Tanner opening a new tower block. Petersen demands attention and does it in a very approachable way, providing a sort of brassy, earthy, slightly camp front beloved of UK chanteuses like (sorry, let’s get it out of the way now) Cilla, Dusty, Shirley or Sandy.

Funnily enough some of the riffs are (well I would say at the very least) tailor-made for a classic Bunnymen track; the brilliant, life affirming opener Jewelled Moon – a track that has Liverpool stamped all over it – boasts a refrain that is classic Evergreen-era Bunnies, the vox crooning suggestively through a set of minor chords whilst Sgt Fuzz thrashes out some clever, sixties-based coda: (and is that delightful trilling riff at the end the work of an autoharp? I’m none the wiser). The same could be said of the guitar lines on Emerald Green Eyes – and elsewhere Sergeant just goes for it, fuzz pedals, mellotrons and echo chambers all chucked into the stew, like some huge steaming Thai soup where precision is sacrificed for greater effect. And in this it’s refreshing, Sergeant was (and is) always at his best when adding a viciously frayed, energetic sub plot to winsome crooning; calling a singer’s bluff with the sort of burning guitar runs that plot their course through a track like a bushfire: (think Bunnymen tracks My Kingdom or Heads Will Roll, if you will).

I’ll be honest and thought initially that this record wouldn’t work, and in places I’m still not totally convinced. Melody (which is a funny mix of Hot Sand by Shocking Blue & Angels in the Balcony by Blondie) just fails to pull off whatever mystic message it’s trying to convey; I’m not sure what it wants to do to be honest. And the take of Femme Fatale on here needs a bit more steel and less accompaniment: and it’s increasingly noticeable, on replaying the track, that when you take the original’s spruce (almost nihilistic) arrangement against that ever present, simple percussive “tick”, that sometimes less is more. But you know this is actually – once you negotiate your way past all the 60’s markers that clutter your path – a bloody enjoyable listen, and somehow a very contemporary pop record.