This lot are somehow scarier, the sort of half-man-half-pig thing that all bar one of the bassists have going on in with pink adult babygros is the stuff of nightmares

This lot are somehow scarier, the sort of half-man-half-pig thing that all bar one of the bassists have going on in with pink adult babygros is the stuff of nightmares 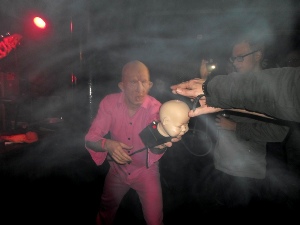 It’s not just because most of Team Incendiary have familial connections to the county of Lancashire. Or maybe it is – maybe this is why we are as we are. Maybe there really is something in them there hills. Never mind Bill Drummond and his bloody ley-line, when you’ve been brought up on Pendle Witches, the secret path across Morecambe Bay and Sabden Treacle Mines the boundary between what’s real and what isn’t is always going to be a slightly fuzzy one. It would certainly explain a thing or two about some of the music originating from the red rose county.  Preston’s Evil Blizzard certainly fit into that category of bands and artists who come across as borderline sectionable but also make really good music. Like the legendary Smell And Quim, whose Milovan Srdenovic wasn’t averse to appearing onstage in a cook’s apron, balaclava, and a massive cock made out of three metres of air-conditioning tube and a balloon – or indeed anyone else associated with the (heavily featured in these pages) Pumf Records. Having a sense of the surreal and absurd does not make you a novelty act any more than the occasional lyrical witticism makes you a comedy band – except in the eyes of the sort of pseudo-righteous bores who ran much of the music press for most of its printed life.

Evil Blizzard are the second band on a three band bill assembled by our good friends at Louderthanwar. This is great, because that way if there are any of those people turning up like you sometimes get at these things, who just go and see the band they like / know / gave birth to, then chances are they will be exposed anyway. Still, John Robb isn’t daft.

He also isn’t quite at the venue when the first band go on – and nor are many other people. Six, in fact, excluding staff. Been there with friends’ bands, bands I was working with or just bands I liked (that’s probably actually even weirder for the bands, to be honest. There are three people there are you don’t know them. Who are they? Why are they here? Do they know where you live?) and you can’t help but feel sorry for them. And they’re good, too, this lot. They’re called Stalagmites, and I don’t know about you but there’s already something a bit Bunnymen going on there even before you hear them, it’s just that kind of word.

There’s a lot more of it when they do start playing, all sweeps of darkness and proggy guitar passages and powerful structures – albeit with a vocalist that’s more nineties Britpop (northern variant) than eighties gloom. It’s kind of jarring at first, like being served a meal of ingredients you’d never have stuck together, and then after a while you realise it works – or at least you’ve got used to it. This is actually a good thing, anyway, as it makes them a bit different from all the sub-sub-Curtis likes of him out of Editors. Another good thing is that they have well-crafted songs with a start and a middle and an end and often a quite different coda – a trick used to great effect of course by The Chameleons. Who are the other band they’re going to get compared to – mind you, if you will have a song called Rainbow Reptile (as they do, the last in the set which has this lovely breakdown in the middle where the bass and drums take a shivering lead) you can’t say you’re not asking for it.

As if by magic, as they leave the stage, the familiar strains of Monkeyland emerge from the PA, followed by Second Skin and I have no idea who’s responsible for plugging Script of The Bridge through the sound desk between bands but I could think of a lot worse things to have to listen to…

And then it’s time. A pall of smoke hangs heavy over the stage, as the air turns… pink?!

Yep. Cast from your mind all things fluffy, sugary, over-feminised or camp; do away with those considerations of Disney princesses and toys aimed patronisingly at little girls (though there are a couple of baby dolls on the front speakers, it has to be said) – Evil Blizzard are here and Evil Blizzard play Pink Metal. The defining feature of Pink Metal, aside from the pinkness, is its gut-churning ferocity: this achieved by having not one bassist, not two, but three… or sometimes four…. or even, briefly, five. Five basses?!  Are they… breeding!? I’m pretty sure there only used to be three of them (plus the man at the back who does the things which are not bass, such as singing and making between-song conversation and playing drums). I’ve no idea which ones are the new ones though – you see they don’t have faces…

There’s always something quite disturbing about watching a band with masks on. Kong (the Manchester-based Brew Records post-hardcore lot, as opposed to any other Kong you may have encountered) always used to put the shits up me. This lot are somehow scarier, the sort of half-man-half-pig thing that all bar one of the bassists have going on in with pink adult babygros is the stuff of nightmares. The scariest one doesn’t wear pink, though, he gets to wear what he likes which may be full camo gear or, tonight, full black leathers. I like to think of him as the Overlord, running the whole operation, cloning new band members or assimilating members of the local population or something. Whatever, pink never looked so aggressive.

Evil Blizzard play deep, thick, pulverising psychedelia – the musical equivalent of a supermassive black hole gobbling up dark matter. Stand too close and you might feel the inside of your head rumble. It’s like a glutinous stew of Hawkwind and Sunn O))) peppered with Fugazi; it’s certainly listenable in its own right (the album’s on the way), grinding and hypnotic in equal measure. And about those multiple basses – there’s no small level of skill and indeed imagination going on here and there’s rarely a point when you couldn’t pick out the individual parts, if you so wished. One is lead, one bass, one drone, one percussion – and sometimes one’s set aside so one of the men in pink can play a keyboard…

…Or indeed a theremin shaped like a baby’s head. Yes, the unaccustomed are just starting to get accustomed (or hiding at the back) and then he brings that out. Then the hairy leather one picks up the babydoll, holds it to his partly-bared chest and, er, feeds it. “This one goes out to anyone who can’t sleep, and if anyone’s from Copenhagen we’ll see you later” probably makes sense to somebody (or not). One of the basses is being handed around the crowd, still plugged in. I manage to find the right key when it gets to my go, which makes me happier than something so irrelevant probably should.

There’s another band on after, poor sods. They’re not great, though not bad, at least in any sense where their badness would be particularly noteworthy, but at the end of the day they’re not great big mutant alien pig babies. Outside, some relatively human looking creatures with Preston accents are loading out bass cases and anyone walking past wouldn’t bat an eyelid, but we know the truth. That’s what they want, to blend in most of the time, that’s how they take over. Lock up your dolls.