This is the music the ancients who put up stones at Callanish were listening to, but it was all just in their heads at the time.

This is the music the ancients who put up stones at Callanish were listening to, but it was all just in their heads at the time. 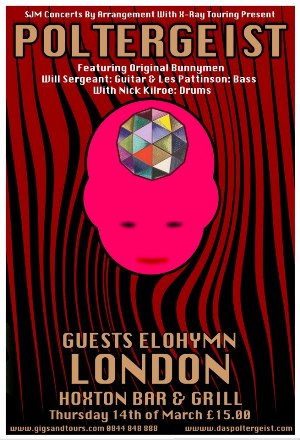 Captain’s log, star date 71409.7. Our destination is Hoxton… Everything is draped in ghostly white.

At 9.30pm it appears that 3 scientists, fresh from the rocket laboratory, climb on to the stage. I’ve heard that it’s very flat where these men come from. But they like the bleakness.

Will Sergeant stands stage left. He holds no Telecaster, no Jaguar. Tonight’s weapon of choice is a 6 string glittery red humbucking ray gun. The tailpiece looks like it has an eye similar to those painted on ancient Greek ships, used to ward off evil.

The repeated picked riff of Lune Deeps is introduced and the hypnosis begins. Les Pattinson stands centre stage and his blue Jazz bass holds the ship steady, anchoring the spooky trembling notes swirling around our heads. From stage right there is a sudden commotion and a flash of cymbals from Nick Kilroe and suddenly the ship is lifted out of the water and into the skies. 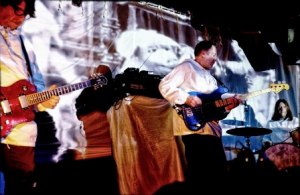 Does your local record shop have a cinematic sci-fi psych-prog space rock section?

For Cathedral Will Sergeant teases out crystal harmonics while Les holds a revolving bass line and for a short while we are in the Bunnymen’s Fuel and Broke My Neck “territory”, but colour and light increase and when guitar overlaps bass overlaps drums once again this
vessel is freed from its moorings and we are hurtling across the cosmos in a small silver craft heading towards one of Jupiter’s lesser known moons.

Poltergeist are willingly pulling us this way and that, making us look up into the stratosphere and back down deep into the underworld. We are treated to a psychedelic hour of the new album Your Mind is a Box (Let Us Fill it With Wonder) including Dreamer Dreams of Spectrums and The Book of Pleasures, titles which hint at the strange and wonderful lore practised at Poltergeist HQ. 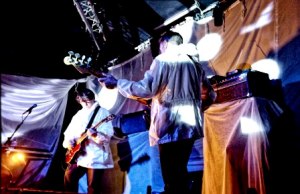 As well as the 6 string atomic freeze ray, Will has a box of tricks to hand and, like all good scientists, he turns dials, flicks switches and generally tampers with waveforms of all descriptions while Les Pattinson and Nick Kilroe lock in and fall out in perfect unison, turning the music inside out, the resulting sound a journey through an entirely new landscape, an astral promenade on the blackest night with the stars as you’ve never seen them before.

The projections onto the white-out stage and our white-out scientists give us robots stalking the land and Peter Cook as the mad hatter dancing a jig. This is the music the ancients who put up stones at Callanish were listening to, but it was all just in their heads at the time.

Not a word is spoken all evening. Lay down thy stethoscope and groove. 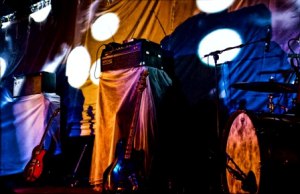