Imagine Wesley Willis in space, fronting a heavy metal band whose members are baboons on Ritalin.  Then you may come close.  Fun, eh?

Imagine Wesley Willis in space, fronting a heavy metal band whose members are baboons on Ritalin.  Then you may come close.  Fun, eh? 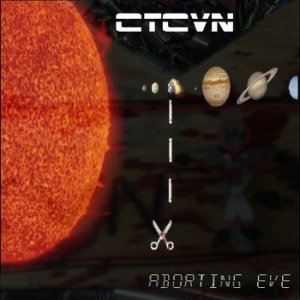 This is an ugly wrecking ball of a record; right from the off, from the initial sludgy, jarring cronks of noise in the opening track Five Bee Hives. Aborting Eve is an LP that conjures up the vision of some terrible karaoke bar on the other side of the Styx where singing Luther Vandross is The Law, motherfucker.

So, ugly, messy, in your face and damned LOUD. That’s what this LP is. As with all the releases on this label. Quite why I find all the releases on doubleedgescissor so exciting is still hard to fathom, but nevertheless they do seem to scratch some subliminal itch. There’s a dystopian element to all their releases that nevertheless sounds damned funny; maybe it’s the element of risk taking: this LP (like a number of others) was done in a day, so I suppose there’s no time to ponder on the importance or otherwise) of it all. There’s an MOR element to this particular release though that gives it a special edge: some nonsense from say John Cougar Mellencamp that has been put through an industrial grinder, something from Tina Turner’s 80’s LPs slowly dissolving in a chemical purifying tank. There’s so much front with tracks like UNO and Not Anything I Do, the singer’s obviously wearing a cut off leather jacket as he screams and howls through this nocturnal sludgy racket. As he says himself in Fairy, he’s a lovely little fairy.

And funnily enough for such an abrasive record it’s got a fair bit of melody; albeit a melody (such as on the slumberous Bee Four) that is damned hard to pin down; like some ethereal wailing from an undead host floating above the rooftops, this melodic element drifts and slides in and out of our consciousness. So it’s incredibly slippy and yes, weird and off kilter, but there are tunes of sorts in there. Trust me. Of course there’s a hell of a lot of other things happening, some tourettes-inducing takes on heavy metal or MOR for one. And a whole welter of blurting and spazzy synths in tracks like Five Pies and Sun Gone Down. It’s unhinged at times. (ESPECIALLY the 20 seconds or so of silence on Five Pies at the end, that is freaky). And I warn you, your senses will be f.r.a.y.e.d. frayed if you try to listen to it on repeat.

In conclusion. I love it, I really do. In small and intermittent doses. And reading back this review does give an impression of your reviewer being flayed by all manner of things and maybe that’s made you a bit cautious of dipping your toe in this turbulent sonic ocean. So how to quickly give an impression to whet your appetite? Imagine Wesley Willis in space, fronting a heavy metal band whose members are baboons on Ritalin.  Then you may come close.  Fun, eh?