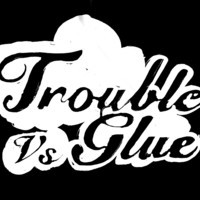 Sometimes you hear a record that rejuvenates, inspires to such a degree that you could run for weeks off the cosmic energy the music has transmitted. I’m so happy that Trouble Vs Glue made Die Trauerweide. Really, this daft quirky record has given me such a lift.

My sense of happiness is only increased with the knowledge that Die Trauerweide could be a really annoying, pompous, arty record; it could really wind you up, it could be far too clever for its own good.  But Die Trauerweide isn’t; it’s a scream. It’s stuffed full of great, daft, independent pop music. Right from the off the LP’s a total trip; Intro is a scuzzy thing where a lot of squeaky, glitchy synths pitch their wits against a lot of yelling. There are some tremendously off kilter, dumbass basic pop tracks, like Directions, Jungle Hall or the utterly brilliant, stupidly querulous All The Things I Want, which is as daft a stomp-along as you could wish for.  Metal Lead and My Holy Sake are gloriously dumb and fey takes on synth pop, at turns charming and bloody annoying; like some daft puppy that chews your favourite shoes up.

Recently I’d been grumbling on – in full old git mode – as to whether we’d ever see a band like the Residents again. Die Trauerweide is one of the few records that really does have a similar spirit to that oft quoted, rarely heard band, and like The Residents’ more celebrated releases, its quirkiness is underpinned by a tremendous sense of confidence and an absolutely brilliant pop sensibility. Rudders in the Air is a sloppy messy take on Duck Stab, or a Sugarcubes track even; the vocalists seem to want do battle, the lad sounding like Max Headroom and the girl sounding like she’s constantly ingesting helium. Spacegrave is an annoyingly childish melody that somehow sticks in your head and is consumed in the end by some ridiculously high tempo bleeps and squeaks.

You know, at the moment there is SO MUCH stuff around that essentially sounds the same or is happy to stick with whatever the current consensus dictates. So when you find something that is happy to exist on its own terms, not that arsed whether you discover it or not, it’s a brilliant feeling. Trouble Vs Glue’s Die Trauerweide is such a release, existing in a space of its own making and doing what the hell it wants, all of the time. What a laugh listening in is.