This is Sturm und Drang writ large, Hausswolff preening herself like a harpy high above the metallic clashes and stentorian parps and blurts. It’s fucking brilliant and no I really don’t fancy meeting her.

This is Sturm und Drang writ large, Hausswolff preening herself like a harpy high above the metallic clashes and stentorian parps and blurts. It’s fucking brilliant and no I really don’t fancy meeting her. 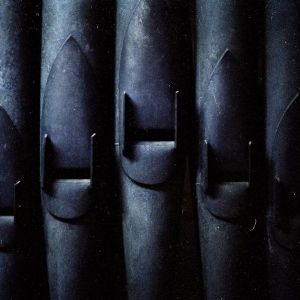 What a record. I know nothing of Anna Von Hausswolff – I’m not that arsed about biogs, so I’ve not bothered checking her out (so as to regurgitate all the usual filler in a review) but she does sound like she’s from some nuts Teutonic baronial family, and (and, and, and), I DO know that this record of hers is a hell of a listen: poppy, austere, and adept at balancing a weird, bright, scrubbed Julie Andrews vibe against some outrageous Gothic attitudes. A Goff Julie A. Wow. Well that’s the impression I get at times. And with tracks called Epitaph of Theodore or Funeral for My Future Children, you could be forgiven in thinking that this record is either stuffed full of the most preposterous, lumpen rubbish this side of a Red Hot Chilli peppers record or star-browed, gilt-laden glimpses into the Land of Faerie. I’m glad to say it’s much closer to the latter, though we do get the odd wobble on the way.

The cover is tough as old boots, a close up photo of the vents in an organ. Coupled (obviously) with the title, it makes everything come on like some Joy Division bootleg. The opener Epitaph of Theodore plods along like a bloody funeral (fitting, I suppose) before some reedy synths make the track sound like Telstar played at 17½ rpm. Things really kick off with the second track Deathbed which is ridiculously broody, looking to inhabit the same place at Atem or Irrlicht, no backing off, raw meat sandwiches and declamations of Goethe before bed. About three minutes in things kick off, and the track starts to sound like the opening of the Gates of Mordor. This is Sturm und Drang writ large, Hausswolff preening herself like a harpy high above the metallic clashes and stentorian parps and blurts. It’s fucking brilliant and no I really don’t fancy meeting her. Mountains Cave is the first bit which has a sort of Gothic Sound of Music feel to it. It’s also like some ridiculous, declamatory take on modern alternative pop for the chattering classes, maybe it’s the chords she uses but I keep thinking of My Brightest Diamond or Thus: Owls. Luckily Goodbye is a floaty, starry thing that does allow you to draw breath after such a heady beginning as another high altitude attack would have me leaving the room. Though it does start to ascend in a very impressive manner by the end, building the pressure up for Red Sun which is a swooping and very affective lament.

I’m at a crossroads with this review. Really there’s SO MUCH of this record that demands a high octane, maybe over the top response, as it’s a really belting, daft, contradictory, and interesting release: and I also don’t really want to wear you out or give you eye strain. And I’m not sure whether I can keep going on at this pace as I’ll just sound dafty. Nope, maybe it’s best if I briefly tell you about a couple of standout tracks* in this maelstrom of emotion and attitude. Liturgy of Light is a beautiful lament, just about this side of pompous: it’s weepy and creeps through your conscience like some vision in the night, and it’s also (maybe) suited for an Andrew Lloyd Weber musical (but nowhere near as naff.) That may make it sound like it’s utter shite but it is really affecting, and despite the odd “Euro-lyric”. Following that, Harmonica is an astonishing track, starting with a simple hand clap and blossoming out into some sort of gothic dystopian landscape, full of atonal furze and scrub, and Cocteau Twins style “sweeps” of lightly brushed guitars. It’s also got something of a musical revue to it: really this girl is wasted in the pop world.

There have been some remarkably singular records this year, bucking trends and movements, standing up and ploughing their own singular furrow. This is one of them.

*I really should have said something about the brilliant Funeral for My Future Children or Sun Rise, which is a re-working of Song For the Siren too… oh well.