The end seemed nigh for our intrepid reporter and yet once again he’s leaving the concert, the sense of déjà vu providing a welcome relief from the spirit-crushing ennui. Apparently this is the ideal place for Stephen to gather his thoughts before setting off into the wet grey yonder in search of the magic bus to Didsbury.

The end seemed nigh for our intrepid reporter and yet once again he’s leaving the concert, the sense of déjà vu providing a welcome relief from the spirit-crushing ennui. Apparently this is the ideal place for Stephen to gather his thoughts before setting off into the wet grey yonder in search of the magic bus to Didsbury. 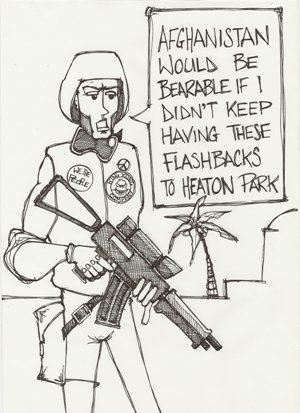 Unless Peter Jackson is involved everything with a beginning has an end. (Really? what about this bloody gig review? – Ed.) In spite of that we find ourselves back at the start, although this time real life will replace puerile posturing.

According to Tony Wilson, misquoting Maxwell Scott in Who Shot Liberty Valance, ‘If it’s a choice between the truth and the legend, print the legend.’* But in the first article veracity was pushed so far that my artistic licence is in danger of being revoked: I live in constant fear of being accosted by Blessed and Branagh demanding it’s return with sonorous gravitas. Points must be clarified. Reparations made. The Sudetenland annexed.

My departure was actually far less dramatic than the opening paragraphs suggested. More uncomfortable than dangerous. Irrefutably less like a battlefield. Fireworks certainly make an exceedingly loud bang, especially a Thunder King 25-Shot Air Bomb Repeater dropped down a concrete stairwell into a covered market, but unless you insert one into an orifice you’re unlikely to expire watching your internal organs make a desperate bid for freedom. Likewise, if you ignore the huge plume of dirt, masonry, entrails and shrapnel that accompany an artillery explosion, they may be as spectacular as a Roman candle or Catherine wheel but those near enough to appreciate them are more concerned with rectifying this perilous state of affairs. Normally by attempting an impression of Usain Bolt.

I wasn’t being pursued. It’s doubtful I was missed by the strangers-formerly-known-as my-new-best-friends who had selflessly taken me under their wing. They had far more important things to do. They weren’t worried about how they’d get home or getting a good night’s sleep. They were going to celebrate a truly amazing day by indulging in hedonism so extreme that Belushi and Moon would have claimed to be washing their hair.

Even if they did recall me it would only be to curse my name for treating their charity so contemptuously. A social faux pas as heinous as mugging the Good Samaritan. Then again they were so chemically or herbally invigorated that they didn’t know who they were let alone who I was. I would just be a hazy memory. A vague recollection of an uptight, itinerant agricultural worker when they next listened to the Wurzels or required some fields ploughing.

The only mission I was on was to get to bed, possibly stopping for pint and a bite to eat if everything went to schedule and a suitable venue presented itself. Interestingly enough though, I was spot on the money with JC but more of him later.

In practice the worst thing that happened as I left was being jostled. Nothing too serious? Think again. If I’d been holding a drink this could easily have caused me to spill it, which if it’d had been blackcurrant would have resulted in a particularly stubborn stain and, due to a rather hectic few days deciding what to wear for the gig, I had neglected to keep on top of the domestic detergent situation. If it’d been coffee I could have been scalded. Additionally it should be pointed out that the path was badly maintained and muddy in parts so it wasn’t inconceivable that an unprovoked shove could have caused me to stumble resulting in a bruise or a graze. Why did I bother inventing that overly histrionic verbiage when, like Daniel in the lion’s den, I was running such risks?

Well the initial descriptions may not have been accurate, but action-packed prose does serve a purpose. Shock and awe demands the attention of dictators and readers alike and then, while they’re distracted, you can steal their wallet, girl or country. However, as you have stuck with my rambling, unfocused tale so long apparently gimmicks are unnecessary.

Effective as it is, sadly an approach like this attracts the wrong type of audience. Individuals who claim to have served with Andy McNab, would rather spend their days in a foxhole than a library and use their index finger and lips when reading. Regrettably these aspiring spree killers have the attention span of sedated goldfish and as soon as the pyrotechnics and killings cease they wander off to non-euphemistically polish their guns.

These irrelevant flights of fancy also enable me to indulge the adolescent fantasies I’ve nurtured into so-called maturity. Back when I was young and my hopes were high I wanted to be a soldier until the auspicious day I heard the poignant lyrics of Status Quo’s You’re in the Army Now. If I hadn’t who knows where I’d be now? Most likely dead, crippled or homeless, but at least it’s a macho profession and people don’t continually question your sexuality or assume you’re perpetually unemployed. (Which, as far as the Department for Work and Pensions is concerned, I am.)

Anyway, as this tale has come full circle an intermission is in order. And, in case you’re feeling peckish, I’ll be popping round with ice cream, popcorn and sugary drinks so make sure you’re decent.

This break provides the perfect opportunity to assess how this piece is going. It’s relatively amusing and occasionally interesting with a mediocre narrative thrust, but as a critique it doesn’t really work. So far the Stone Roses have simply had a walk on part, and then there’s all the tangents and deviation. If I were a contestant on Just A Minute Parsons would be forced to get mediaeval on my ass. Not that it is totally without value: few reviews take over a year to complete. God willing it’ll be concluded before The Stone Roses finish their third album. If not the editor will finish what Nicholas started. (That’s enough – Ed.)

* For the more pedantic the actual quote is: “This is the west, sir. When the legend becomes fact, print the legend.”