As my hero Les McQueen, former rhythm guitarist with Crème Brulée, says: ‘It’s a shit business; I’m glad I’m out of it.’

As my hero Les McQueen, former rhythm guitarist with Crème Brulée, says: ‘It’s a shit business; I’m glad I’m out of it.’ 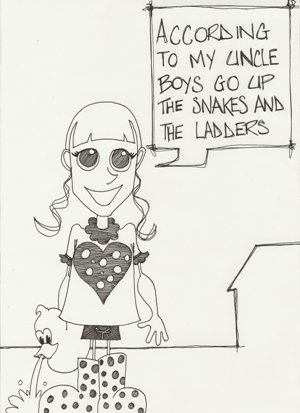 Lying is wrong. It’s one of the Ten Commandments. ‘Thou shalt not bear false witness against thy neighbour’, an archaic way of saying don’t tell fibs. When Pinocchio lied his nose grew. Although this latter example can be discounted as the same tale informs us that young men who do nothing but play and never work always grow into donkeys. I have the work ethic of a sloth with chronic fatigue syndrome and despite being regularly described as an ass I have yet to be transformed into one.

Perfidious by nature and design I take a less prescriptive approach. Mendacity shouldn’t be engaged in unless you stand to gain from it. When you’re helping the authorities with their enquiries, denying eating the last ten cream horns or explaining your incredible luck at snakes and ladders to your six-year-old niece Kit-Kat it’s more than acceptable. It’s also fun and makes applying for jobs, passport applications, censuses and online dating less tedious. My partner still thinks I’m an astronaut, although she’s rather confused about why it is she, not N.A.S.A., who has to wash my space suit.

In the last issue, like a policeman restraining an immigrant I went too far, propagating falsehoods to assuage the unbearable guilt. My conscience and I have not spoken in years and I refuse to be manipulated by it in a moment of weakness. Now the record will be set straight.

Seconds after replacing the receiver the full impact of what I had done hit me with the force of a 50-calibre round. The Travis Bickle Combo had been offered a paying gig and I’d talked the promoter out of it. In that instant, struggling to come to terms with the enormity of what I’d done, I empathized with all those fraught men meeting their mail-order brides at the airport for the first time, although my problem couldn’t be simply solved by six months of cabbage soup in a well-ventilated cellar. I grabbed the telephone and frantically pressed redial, before realising this function hadn’t been invented yet.

I needed the student’s union’s number. Unfortunately I couldn’t afford to waste money on directory enquiries and had burnt the directory in an attempt to fend off hypothermia last winter. A foolish act perhaps, but it was better than venturing out to scavenge the only indigenous fuel: meconium filled nappies from single mums’ bins. Unlike 10th-century Bohemia, anyone venturing out after dark in Fenham was more likely to be mugged than have a king take pity on them no matter how crisp and even the snow.

The situation had to be rectified. I needed to assemble the TBC immediately – hopefully Rob and Damien could remember who they were – and head down to the university to prove to the Entertainments Officer that we were just what the Summer Ball required. Surely he’d be impressed by our show of unity, punctuality and implicit threat.

Preposterous though it seems, inspired by Batman I had planned for this eventuality and rushed to the Bickle Beam™: a modified Klieg searchlight mounted in the backyard that projected the stylized image of an angry, heavily-armed, Mohican-sporting loner onto Newcastle’s sky. It had been expensive but would prove invaluable. Alas, it needed a new bulb.

Frustrated I grabbed my donkey jacket, keys and whatever chichi hat I sported at the time and rushed to the front door. I had just turned the latch when it occurred to me that I couldn’t leave. What if he rang back?

Another problem was how to contact my band mates. They didn’t have a phone but maybe smoke signals would prove efficacious? Probably not, they’d assume any fumes were from burning TWOCed cars. (Geordies had just invented this exciting new sport were pursuing it with the passion they usually reserved for watching The Magpies plummet down the league.)

Unable to decide on a solution indolence won the day. I returned to the sofa to wait and brood about how when my gift horse arrived I examined its mouth and advised it to see an orthodontist.

The call never came. He obviously spoke to one of the gig’s survivors and overwhelmed with relief celebrated his exceedingly close escape with lashings of alcopops.

In times of distress schadenfreude is a considerable comfort and I take solace in the knowledge that the vividly disturbing descriptions of our performance would have haunted his evening substantially dulling his jollification. Even if things didn’t descend into a pitched battle numerous people would have been injured in the inevitable stampede to flee. His undemanding job would have been forfeit and legal proceedings initiated resulting in a lengthy stay in the big house. Remember this was decades was before The Kaiser Chiefs had made riots popular, guaranteeing some mild words of chastisement and a cheeky wink from the judge.

The months of anticipation drifted into years and I finally faced reality. I became a writer, which is not as glamorous as lead singer. Inevitably, I’ve visited more soup kitchens than premieres, more clothing banks than boutiques, but at least I can work walk down the street without the inconvenience of being mobbed. I wouldn’t mind the hordes of beautiful teenage girls but dealing with the gutter press would have been too much to bear.

So what if he got in touch with me now? Regrettably the decades have not been kind. My legendary prowess has waned and I am no longer physically prepared for the rigours of fame. Substance abuse problems, a pungent body odour and a distended beer belly are de rigueur for authors, but would have a detrimental effect on a pop career. No editor wants to feature you on the cover if they have to spend their annual budget photoshopping your image. As my hero Les McQueen, former rhythm guitarist with Crème Brulée, says: ‘It’s a shit business; I’m glad I’m out of it.’

Who am I kidding? I’d do anything for fame. Anything! TBC does not stand for the Travis Bickle Combo it stands for To Be Continued… just please get in touch.

Next month: To Be Confirmed

Any record producers can contact Stephen by smoke signal or electronically at theheadcleaner@live.co.uk. Rest assured he’ll be amenable to your suggestions no matter how outlandish or depraved. Well unless they involve any effort.