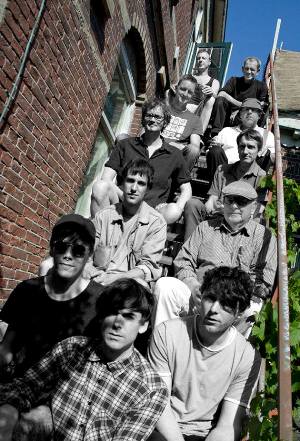 It’s baking hot. So the most sensible thing to do – of course – is to go and buy some vinyl and walk around with it in a field where there’s precious little shade. Oh well. You live and you learn. And this moment of madness spawned an interesting anthropological exercise: I was as paternal over my prized original pressing SLF Inflammable Material LP in that hot field as any Emperor Penguin would be with his new born chick in the Antarctic wastes. We were happy enough in any case. Metropolis is one of Incendiary’s favourite days out of the year, and lounging around the Zuiderpark and watching the tattooed, baseball capped legions of Rotterdam’s youth desport themselves in this sylvan glade, replete with their fighting dogs and roll up fags is a top day out, compadres.

We arrive in time to tune into Jacco Gardner’s set what was (apparently) the Thinker’s Stage. We’ve not seen Jacco since his days in the Skywalkers and as there’s been quite a hype round his debut record*, we were certainly keen to see what the fuss was all about.  As to the gig: well it was enjoyable – poptastic at times  – but the heat just left people limp, dropped out, maybe not wholly tuned in, certainly not turned on. Gardner’s dreamy Moody-Blues-meets-Syd vibe was never going to rouse anyone much given these circumstances. His songs are pretty and thoughtful and there’s genuine charm and craft there. It’s certainly not fair to say his music is some “Peter the Photocopier” take on one of the more celebrated blasts from the past. But, based on this gig, the answer as to whether his output is going to be more than a diverting exercise in recreating the template of 66-7 is for time to reveal.

(*That bastion of all that’s proper and above board, the BUMA, have trilled long and hard about his SXSW & Brighton gigs, making him out to be some boy wonder, ready to convert jaded musos everywhere into starry eyed converts. Hmm. Wonder why?)

If there is ever a need for a Gothic butcher’s shop, (as in a butcher’s shop, selling meat, for Goths, by Goths), we suggest that K-X-P’s singer would be the ideal candidate to serve behind the counter.  It takes some presence of mind to wear a full length studded black leather apron, especially when it’s roasting outside and the open tent is humid as hell. But K-X-P are Fins and obviously have no truck with those foppish Dutch metro-males with their tote bags and flowery sans culottes. K-X-P are dressed in black and wear monkish cowls. Their bassist looks like a victim of Grendel’s Mother, or Chaucer’s Pardoner. They look like they’ve just fixed the rear axle of their van. And they make a subterranean rumble that doesn’t look to go anywhere in terms of changing chords and all that sort of clever shit, but goes a long way in pulverising the audience into a submissive, shaking mass. It’s a brutal, back to basics assault, a test of patience. You are either going with it for the whole gig, you’re off to the beer tent after 4 minutes or so.

So. Good stuff. As it’s hot beyond belief and the thump K-X-P summon up is enough for the here and now. But I should also say that this band could really do with a guitarist, as the singer’s fist pumping (of which there is a lot) looks a bit restrained, given that he has to keep twiddling nobs and pressing keys on whatever the fuck electronic gadget he’s standing behind. It’s a bit like watching some political speech where the speaker’s not that convinced he can get away with the message. Given a guitarist or extra keyboardist I think this could be a supremely entertaining band to watch.

Then a little more lounging around before Rats on Rafts and de Kift look to mark 25 years of Metropolis with a special show.  We’ve heard a lot about this from various sources, and we’d expect these two bands, both of whom can certainly play, to cook up something special. Inevitably, (given the never ending “curse of Rats on Rafts” and the fact that there are about 10 musicians on stage), there are a number of sound issues: David’s guitar completely packs in at one point and someone who looks a bit like Otto from The Simpsons pops out to fix it. Never mind. It’s really only now I remember this; shows how little it matters in the greater scheme of things. Let’s focus on the gig itself.

After a brisk run through of three Rats tracks to get the crowd agitated – Money Man,(of course),  News and a marvellous take on Sleep Little Child (sounding punchier and a bit more direct) – De Kift start to amble on stage.

From the off it’s clear that these two bands are absolutely suited for each other: Rats’ urgency, sense of rhythm and moody diffidence is a brilliant, almost essential counterpoint to the bittersweet observations and considered, poignant pop that de Kift cook up.  And De Kift push Rats to be more showman like, they allow softer, craftier elements into the attack: we know from their work with Ger “Sax” van Woorden that Rats’ sound suits a brass stab, but the weight of De Kift’s brass section brings a broader, more subtle wash to their sound. David’s singing is more considered too; his timing and poise is great on the day, whereas Ferry Heijne seems genuinely energised by having these lads on the stage. The noise from the stage often feels as if it is being reflected through a prism, it’s often dense and complicated, nothing is that straightforward, and there are plenty of quirks and funny nooks to be explored.  Milk and Honey (Rats’ new killer trip out) is jaw dropping; given a marvellous poetic coda, the track morphs into a sort of middle aged rant, an urban moan from someone sat twitching the curtains to check out who’s at the Febo. That the track itself cheekily nabs the Bunnymen’s live jam in the mid-section of Crocodiles is neither here nor there. It’s fantastic. Fire is tremendous too, a sort of howl that (and here I misquote) “Represents the Boredom Felt By Young People Today”, whereas Rolfie is another mix of spoken word rant and brass interjection; the brass seemingly answering the questions that the lyrics pose. Last up we have a mix of Powder Monkey and (in De Kift’s own words) Dit schip (…is oud en roestig. De bemanning oud en knoestig. De oceaan probeert ons elke nacht te slopen…). This is an absolutely brilliant collaboration, a veritable cabaret, or “modern” 60’s musical (I just kept thinking Oliver, dunno why) peddling a whole host of emotions and angles.

This is a great gig, a great experience, and the audience knows it, sure it’s not to every fan’s taste but the crowd, in the main, know that this is just special.

After that we lounge through energetic sets from Ronnie Flex and Concrete Knives (what on earth those lads and lasses have done to bounce about so energetically is beyond Team Incendiary) and then we go and watch Rats and De Kift AGAIN in the tent for the 3voor12 session: an experience that is, in parts, (probably because there are no glitches in the sound), even better than the main gig. Why not watch it here? http://3voor12.vpro.nl/luisterpaal/playerpage.program.27574888.html

Then we run to catch Bombino, who is wooing the Thinkers Stage with an astonishing set. His jams are something else, a whirling, heady mix of chopping rhythm, an incredible, driving bass sound (I’ve not often heard such hard, beautiful, on-the-one-bass lines for ages), and free flowing spiritual runs on lead guitar. It’s lovely and warm now, the sun is dipping slowly, and everything is sultry and golden:  the band sweat through their flowing robes, we’re hot and sticky with spilt beer, but what the heck, everyone just gets on one and there’s just no coming down. Why describe this music? We just look around; this is no time for considered appraisals. The crowd go ape, coming loose at the seams… there’s no real point in doing anything else but dance. It’s one of those gigs where the music just oozes through everything. When the show eventually stops there’s no way anyone’s moving. A brisk, snappy encore, sounding fresh and punchy and all too soon Bombino’s gone. Incredible gig.

We want more. A trip home to Leiden and we decide to go to SUB071 to see Columbian punks Polikarpa Y Sus Viciosas and support from Amsterdam’s Claptrap, both capable – on this showing – of making a tremendous racket. I love female punk bands, they just ooze more possibilities, unconstrained by machismo or any sort of attention seeking or preening. We get everything: screaming interjections, quirky, sometimes revelatory point of view, slashing guitar attacks and a whole panoply of rumbling, uplifting rhythms. That things come apart now and again is neither here nor there. So what if the song’s started and you’ve forgotten to drum along? Big deal; this is a song about the destruction of the rainforests and that’s what you fucks need to keep your attention on. What an end to the night.