Finally tiring of wondering when the singer’s going to stop acting like a villain from a Buster Keaton film and “get it on” and suck the blood of a virgin, we look around. It looks like a webmaster’s conference.

Finally tiring of wondering when the singer’s going to stop acting like a villain from a Buster Keaton film and “get it on” and suck the blood of a virgin, we look around. It looks like a webmaster’s conference. 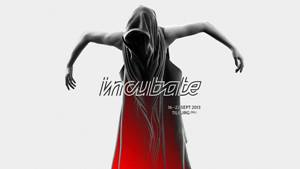 This is not easy. So let me start with a little ramble. There’s a bit near the end of Decline and Fall where the hero, Paul Pennyfather, gets an impromptu lecture from the brilliant young professor Silenius about life, and its similarity to “the big wheel at Luna Park”. I’ll quote a snippet.

“You pay five francs and go into a room with tiers of seats all round, and in the centre the floor is made of a great disc of polished wood that revolves quickly. At first you sit down and watch the others. They are all trying to sit in the wheel, and they keep getting flung off, and that makes them laugh, and you laugh too. It’s great fun.”

Incubate is like life, maybe, because it’s like that big wheel our young prof described. It’s double that actually; it’s like being on the outside and in the centre of the wheel at the same time. It’s an utterly unreal experience. A sense of blessed, detached calm descends; whilst behaving in the most reckless manner.

But then, to quote Silenus again, “I know of no more utterly boring and futile occupation than generalizing about life.”

Shall we get on? Otherwise I’ll get all morose about not being at Incubate.

The train’s late. Later than late in fact. In fact the sort of late that starts to gain an abstract quality; so late you have to recalibrate every experience you thought you would have, or have had, into this new, “late” reality you find yourself in.  Further, Incendiary has just missed Anna von Hausswolf at NWE Vorst. This pisses us of mightily as we are big, big fans of her outrageous UR-drone rumble. We decide that buying a bag of chips may help. It does.

Still, new beginnings offer themselves at the murky rockers bar Little Devil, where Staer are blasting out the most outrageously rich, free-form noise this side of the great rivers. Staer are fab; welding a very organic, textured plateau of sound over a razor sharp percussive frame. The guitars swoop and dip, sounds crash and shatter against the walls, and Incendiary suddenly feels a whole lot better in this room with a load of other pasty, blokey noiseniks. We soak up this gloop of sound and nod in appreciation. We note that their drummer’s pretty damned hot at what he does too, the sort of intuitive, extempore display that holds this kind of music together. Seriously if your drummer’s shit, don’t think of going down the Faust Tapes or Sun Ra route.

Louder than War’s John Robb and I are told in no uncertain terms to see Mayhem by the singer of Altaar, and we agree; but as John rightly points out, we could first do with something to soothe the lugholes in preparation.  So off we trot to see Date Palms, at our fave venue Paradox. The ‘Palms start with a beautiful raga that creates a sort of aural balm, allowing considerable vats of peace and wellbeing to envelop the room. Yeah. This is great. It’s my first time seeing Date Palms and they seem on this showing to have an extraordinary knack of finding a way of suspending any impatience that could break out; seeing that the only changes were careful modulations of tone round a very limited range of notes.  But then Date Palms are good, no doubt; and this is a forward thinking crowd and an experienced one at that; no impatient phone gazers here. Note to self: check out when next in NL…

Now to the main venue to see Mayhem, lords of Norwegian Black Metal. We decide that a position at the back is going to give the best results; we want the panoramic seat at this Longhair Borodino, we want to see the tectonic shifts of amplified noise act like cannon against the columns of black-clad PBI arrayed in front of the stage. We want panzers to rumble through the curtain, using enfilading fire to catch out those nabbing off for a piss. But we don’t. We are a bit miffed to be honest.

We do get some pigs heads on sticks, though they aren’t doing much apart from looking dead. We also get some ferocious axe playing; all of which seems to employ the wrists to such a degree that I think that the guitarist lads must all have prosthetic forearms, like the one waved about in Borat. Will most black metal bands get arthritis? Should I even write this? After all they got a Viking head in the post recently.

Finally tiring of wondering when the singer’s going to stop acting like a villain from a Buster Keaton film and “get it on” and suck the blood of a virgin, we look around. We see lots of nice, quiet lads and lasses nodding on in a relaxed manner. It looks like a webmaster’s conference. They could be coding as I think this. And why is it so quiet?

OK standing at the back is a daft idea, it’s probably miles better at the front but Incendiary’s got what it can from this and we decide to shuffle on down to Cut Hands, who has to cancel. Balls. We decide to split, Mariska stumbles back to the Black Metal Fest at 013, and yours truly decides to find East India Youth at Hall of Fame.

I’m one of those really annoying sods who likes to pretend he knows where he’s going, using that intuitive and wholly natural sense of direction that never got a chance to shine in HM Forces. 20 minutes later, climbing over mounds of building site sand, cutting my hands on fencing designed to keep you out of said site, and trying to avoid what looks like some drug dealer stand-off behind the station, I arrive at Hall of Fame. It’s a cavernous place, part roller park part venue, and full of booming sounds and strobe lights. I must be late. I wait ages for a pint and I’m later. I’m also pissed off because I’ve been served by someone who must be the world’s worst barman. A bloody 4 year old could have poured my drink better. My beer actually gets a round of laughs from my fellow punters as there’s more froth in the glass than that Stones video in which Charlie Watts nearly drowned.  I’m late.

I see John Doran from the Quietus, a man of some standing, and a man whose label East India Youth released their fabbo EP on. The Quietus is hosting this gig and John’s not happy. We groove about to Public Enemy, we have a chinwag about this and that but I can see John’s got other stuff on his mind. Apparently the sound’s shit, everything’s late and the dudes in the place are slacking… I sympathise. There is NOTHING worse than dragging some bright eyed performer somewhere with promises of minds blown/shown only to confront grim reality in the shape of a sound guy with an attitude problem and a half empty room. It’s the case of the spare prick at the orgy. You can smile, laugh, scream or cry, but there’s nothing you can really do expect hope the show, (when indeed there is a show) goes less badly than circumstances on the ground suggest. Finally we have some movement. The room fills up to an okay level, East India Youth organizes his stuff and we have lift off.

Now East India Youth’s EP is great. I like it a lot, and have slobbered on about it at some length here. But I am not expecting this. This is such a committed show. Maybe he’s pissed off with the wait. Things get much more intense than I thought they would; his poor keyboard is hammered, almost getting the treatment the clock does in Golden Gordon from Ripping Yarns.  He continues to tear at his equipment; almost ripping the odd button off along the way. It’s glam, amphetamine-stretched, dystopian. Thomas Dinger for e-heads.  Things get more and more relentless. Is that really a good way to describe this? Who cares…  We break into a very invigorating kind of La!Neu? bluster stomp, then some Metamatic chords screech into view, halting everything.  Still East India Youth smashes on and on. It’s as if some dwarf’s told him that his gear possesses that magicke Moody Blues lost chord and the only way he’s going to find it is if he rips at the surface of his equipment, revealing the truth just below the surface; and in the process becoming some kind of Hohepriester of glitch. It’s visceral.  His soulboy element, which gives his music a more reflective edge on record seems tougher here, stretched, and more vicious; red eyed and green tongued. We end up with what can be described as a tearing, crashing rave, a mix of atmospheric, cinematic bluster and hard-nosed, small town aggression; his head is virtually on the keys,  his stuff is getting thrown around now, shaking it see if there are any more drops of noise he can release. Fucking hell.

Outside things carry on being bananas. Some people try talking to me but I am distracted by strobe lights. It really is like 1988 in here, where cavernous, whale-like ululations of sound mix up with lots of people wandering around, amiably lost. It’s like those raves in Shadsworth in 1988. My pals are suitably affected.  We are of a certain age. Talk degenerates into where to get milk stout in Widnes, of Tranny clubs in Blackburn, and how annoying people who wore Cure teeshirts turned out to be. Biting the pillow stuff, sump dragged from the tank of memory.  Mummy! Teddy’s stopped breathing!

Somehow we get back into town but not before being texted by Mariska. These texts give me the fear.

Apparently “Chaos Invocation are hard, good and brutal German boys who sweat, and Immortal are too much like Kiss and why do they have to be so squeaky on a main stage?” It’s not something that I can answer. Later we learn that “Behexen have no eyelids”. It’s true, (from the blurry and utterly unusable photographs I’ve seen anyway).

We are in Extase. Cut Hands are on, rescheduled from Paradox. And oh my, William Bennett doesn’t half kick off. The place is bouncing, the gig getting euphoric; the complex rhythms and all that head scratching stuff you need a manual to understand somehow becoming fresh and easy to get; there’s nothing here to put you off, let’s just have a GOOD time. There’s a congregational element to the show too; big, brassy, sassy and confessional, and the music playing its part by bouncing round this great space like a puppy.  We feel refreshed. Now for 013, but wait, where’s Mariska? Ah there she is, standing behind me at Dragged Into Sunlight who also give a fine performance; this is what I was hoping for with Mayhem. We get darkness, the terror of the Wald, maybe a sonic attempt at invoking the moment before you are nailed to an oak tree. Who knows what they are up to? All we see is a chalice; everything else is bathed in some sort of vermillion smoke. I realise that it’s enough.  A weird old trip, but Incubate keeps on giving in all the most surprising ways.