In fact things started to get groovy; despite the lights being up and a lot of the audience being gauche stoner wallflowers; we noticed a fair number of groovers had started to cut some rug to good effect.

In fact things started to get groovy; despite the lights being up and a lot of the audience being gauche stoner wallflowers; we noticed a fair number of groovers had started to cut some rug to good effect. 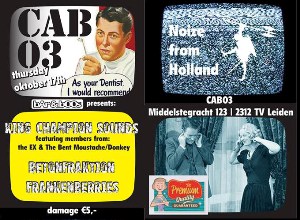 For people making their first visit, CAB03 must present a lot of baffling and maybe off-putting decisions. For one, it’s difficult to work out how to get in the bloody place, as it’s located in the rehearsal rooms behind Qbus. When you do know that pressing a buzzer leads to ingress, you have to walk down a winding corridor with no real idea of where you’re going until you see a small table lamp and a table behind a glass partition. This is your first sight of CAB. Your next revelation will be when you realise the gig space doubles as a rehearsal room.  It’s marginally bigger than SUB071, with 50 people inside being a squeeze. It’s also a loud place; and if you’re a seven piece band like King Champion Sounds then you really have to work to hone your sound in there.  After being so thrilled by them at Tivoli, we’d rolled up to check them out again, intrigued as to how they’d put on a show in such an intimate setting. Frankenberries, who are a great breezy Crampsy/surfy pop band and Tilburg’s Beton Fraktion, who we knew nothing about, provided support along the way.

First to Frankenberries. Now I like short blasts of scuzzy poppy garage; and that’s what this band does very well. They kicked the evening off in a fine, open handed manner; nothing too complicated, the band serving up a bunch of old tropes that were seen as something worth indulging – a little nod to the Cramps here, a quick take on Thee Oh Sees, B52s or Litter there.  And the singer’s “thanks a lot” after every song even had a Kim Deal twang to it. Who’d have thunk!?

No matter, Frankenberries cheerfully put everyone at ease; after all we were here to have fun, right? Got that? There was an enjoyable, crunchiness to the bass, the guitars melded in a nice buzzy brittle mesh and the drums knocked out patterns that your gran to shake a leg to. I like them, they have vim and spirit and whilst they won’t shake the world down they could go a long way to shaking a lot of us if we were better able to grasp the personality and points of view of their songs.  But that’s a minor quibble based on seeing them in a live setting. I like ‘em.

And now….. for something completely different.  Beton Fraktion are a three piece, girl drummer, a professorial type on guitar and a Goff punk Leigh Bowery look alike on vox. Just by looking at them you knew that things were going to take a radical turn; for better or for worse wasn’t immediately clear, but the tension and sense of interest in the room was palpable. Off we went; the singer indulging in every form of vocal theatrics he could muster, whispered vocals, treated vocals, screaming, lectures, changes of language, it was a bravura display. Backed by a sort of sub-Beefheartian rumble, with a fleeting touch of that growly, furry tone The Melvins could conjure up, our singer had ample opportunity to indulge in all sorts of theatre; smashing cymbals, prancing around the room provocatively and always looking to stir up some emotion or other. The audience, initially cowed, started to get it; in fact two tall lads danced wildly in front of the band at some of the more rhythmic passages. What was in their tea?

Sometimes trios can be seen as the paradigm of “bands”; the mechanics are stripped bare and there’s no room for passengers. If the music works then it’s enervating, irrigating and brutally clear. And Beton Fraktion came close to this on the night; confirming that if you do things well, however weird or initially difficult, once you provide a mind map to the audience, you can do almost anything.

King Champion Sounds were taking a while setting their sound up. Not surprising really given the respective sizes of the band and the room, but once everything had been ironed out, we started and the audience started to drift in to take this tremendously positive sound on board. Positive. That’s what really hits me about this bunch. It seems to be about creating something that has the best of soul revue and the more thoughtful, more progressive elements of post punk and seeing whether some sort of multi-coloured cosmic boogie can’t be wrestled out of it all. Whilst I really love their more strident tracks like Orbit Macht Frei, (and the set ender World of Confusion was truly fabulous here), on the night the more measured tracks off their LP, like Shouting at the Moon and Shop Drop gradually won us round; the intimate setting of CAB doing the trick in forging a gentle bond between us and them. GW Sok’s gentle admonitions worked brilliantly in CAB, the sense of patience in his delivery was reassuring to us, especially given the band was well marshalled, being relaxed enough to apply themselves in a confident manner; regardless of the cramped sound. Yup, we could take our time in enjoying this.  In fact things started to get groovy; despite the lights being up and a lot of the audience being gauche stoner wallflowers; we noticed a fair number of groovers had started to cut some rug to good effect.  Dancing got a tad more involved with the blasting ending World of Confusion provided; which really was a perfect ending to a great gig.

So. A top top night yet again. I’m so glad Leiden’s got places like CAB03, just goes to show that the best things take a little bit of effort.