Katadreuffe are somehow grabbing a whole set of fractive, seemingly non-related noises and attitudes and watching them melt together in the white heat of the noise they generate.

Katadreuffe are somehow grabbing a whole set of fractive, seemingly non-related noises and attitudes and watching them melt together in the white heat of the noise they generate. 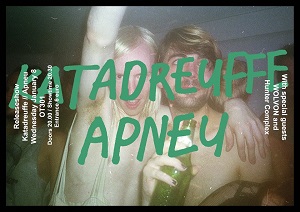 OT301, in Amsterdam, is a cool place. Sometimes so cool that I feel that I’m walking round with a hen’s nest up my arse. It’s a place (normally by association with the gigs it puts on) that sort of encourages genuflection on what’s in and out; what to wear, or what to say and what not to say, a veritable Versailles of underground preening, albeit with the Sun King on sick leave. Normally when we’re here we get ratarsed to get over it, embarrassing ourselves by ridiculously friendly displays of bonhomie to boot. Tonight turns to be no different. Seeing the packs of journalists and scene types out en masse for WOLVON, Katadreuffe, Hunter Complex and (probably most of all given the gushing mainstream press they’ve been receiving lately) Apneu, Incendiary hits the bar as soon as decency allows.

A medium-ish display (given it’s Amsterdam and the omphalos of “whenever we’re ready” cool) of running-over-stagetime-lethargy passes and then it’s straight into those metallic goatherds of the Northern wastelands the Dutch know as WOLVON. Tonight they treat us to a set full of new songs. Songs that are pretty much “out there / all the way and no backing off” at that, and I do feel honour-bound to describe them. Now, regular readers of Incendiary will know of our WOLVON-love. We dig their big grooves, thickly cut riffs, and generously spread rhythms. We dig their flailing Muse roaring through our psyche in its Boudicca-styleee chariot, oh yeah. We love WOLVON. In fact our WOLVON-love got so sticky and coagulated back end of 2012/13 we had to BACK OFF BIG STYLE cos we were, frankly, embarrassing ourselves in print. Not only that, but we started to sound like a broken record, and an increasingly demented one, too. You see, there are only so many times you can write about the same live set without sounding like a one-eyed half-wit; maybe Reg Smeaton could get away with it, but he’s not even a real person. So both parties took a mental fellation break. WOLVON went and wrote some new stuff, Incendiary worried about writing MA essays and spending all the money we’d saved on a middle age crisis life change. As you do.

And now in the gloaming of OT’s main hall, WOLVON pummel the audience with new songs, songs that sound like they’ve been dug up from the Siberian permafrost. Using one of them fuck off industrial diggers. Despite the fact that Bram’s drums/mic are yet again troubling him, and Ike doesn’t seem all that sure of his new lyrics (or maybe the sound guy’s proving himself a bit too subtle on Ye Vox Knob) WOLVON rock. What is immediately noticeable is the buzzing, grating burr from Ike’s new Rickenbacker, an ever-guzzling, metallic grind that ain’t too far from aping the sonic shapes early Nirvana threw. No, they don’t sound like Nirvana, more Mudhoney if we have to make that comparison; what I’m saying is there’s a sense – through the guitar – of a spirit that Nirvana toyed with. OK, it reminds me of when I saw Nirvana. OK? And it’s intensley exciting when it comes off. Riffs crash and burn and sound like walls falling in, the melodic payback comes just as you think it will never come, (leaving you a tad breathless) and the rhythm section sounds like a wind machine that’s decided to fuck off to Gretna Green with an old chest freezer. (i.e. LOUD, and RUMBLING and EVER LOVING). What’s really cool is that the old material (the normally towering Future Truths for example) sounds well, just really good, no more. When they get this set licked into shape they could be phenomenal.

Onto matters more cerebral and well, more shaved. I know and like all of the members of Katadreuffe personally. Now and again I even deign to speak to them, although I wouldn’t openly admit to knowing them in “society”. Intelligent, menacing, dead cool in a sort of 1964 Provo way, with no added schmaltz or Hendrix poovery, Katadreuffe rock, and could carry the current manifestation of Dutch underground rock into fallow pastures, ones waiting to be germinated by an army of new believers and doers/thinkers. This conviction (that they are a stone’s throw of unlocking something genuinely refreshing, sonically) allows me to disclose that I revelled in shouting “Dungeons and Dragons” at them for what felt like 3 minutes but in reality must have been the entirety of their gig. Blasphemy? Nay, Sirrah, a justified and important part of an audience’s appreciation! You dig? Katadreuffe (on this showing not the human incarnation of a wind tunnel that they were in ACU in November but pretty fucking fierce nonetheless) are somehow grabbing a whole set of fractive, seemingly non-related noises and attitudes and watching them melt together in the white heat of the noise they generate. They could become Within Temptation, or they could be heavy metal Throbbing Gristle. Or both, with that jalopy Numanoid beat they’ve unearthed. Choice is yours, kiddoes.

Oh and yeah I agree, shouting “Dungeons and Dragons” was a bit of a two-dimensional observation, I realised that at the time –  so I yelled “Mordor” a few times and demanded the band played the Nolan Sisters’ classic schmaltzathon, I’m In the Mood For Dancing. They didn’t but hey, music like Katadreuffe make currently unlocks a whole host of associations, and we should IN-DULGE. Pipers at the Gates of Hoofdorp!

Now the OT is packed! And there’s a reason; Apneu. The power of Ye Presse arrayed before us, and the sense of “we can’t miss out” in the air; here so thick you could smear it on a TUC cracker if you had any to hand, that is. Apneu saunter on and play their Jeffrey-Jonathan-Santiago-Shellyan “Poppe Musicke” for all of us to groove mildly to. And many do, the audience perform jaunty jigs and giddy bounces like they’re a bunch of pissed up vicars at a confirmation ceremony. Apneu’s music is essentially wedding music, stuff for grandads to dance with toddlers to, daft win some-lose some songs that carry just enough beat, and chorus, to charm. When I say just enough I mean that; as everything’s about a minute in duration, including their best track, Battery Island, a winsome singalong cruelly chopped off in its prime destruction phase, just like Charles 1st was. Apneu win through  by repeating the same trick over and over, whilst pretending that they aren’t doing anything of the kind. It’s very Buzzcocks, albeit a twin cylinder Buzzcocks. The singer, slightly cross legged, gauche, floppy haired, looks like he’s holding out on a gigantic lizard-draining exercise before the next service station. The rest of the band try and fail to look perfunctory. It’s fun.

Now time to take in Hunter Complex, albeit briefly as we have a train to catch back to Leiden. Lars of Narrominded, aka Hunter Complex takes full use of the massive space afforded to him by the stage and whacks out his Sound and Vision to great effect. This is possibly the best of the four shows, just for the way it’s thought through. I mean, he really does think his stuff through, and his visuals are (when they’re projected at a decent size) more likely to make you move than his grooves, PURELY BECAUSE they are so brilliantly segued into his music. The Incubate gig last year was great but in the back room of a pub; now, with a big room and amplification to boot, the set was pretty dark and stickily compelling, in a way that very, very early, street-lamp powered raves were; (especially if you avoided falling into the sump pits back then). The weird cuts of 80s films also suggested some mash of Tarkovsky and Toyah too (notebooks out, chinstrokers!) and it was a bitch squared that we had to leave. I dig public transport as much as the next state employee but hey, sometimes leaving early is a pain.

Still, a good night, nothing we didn’t know but enervating to have things confirmed, yet again.