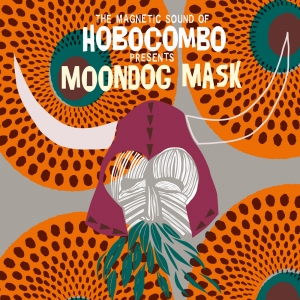 Hobocombo have used the ethos of Moondog for their own compositions. What we have then is a mixture of Moondog and new work and the result is an intriguing one.

Hobocombo have used the ethos of Moondog for their own compositions. What we have then is a mixture of Moondog and new work and the result is an intriguing one.

The appeal of Moondog is obvious: everything about his music, appearance and lifestyle is fascinating. It is no surprise that artists, beguiled by him, have sought to take his music in different directions. Classical, jazz, folk, minimalist, outsider: Moondog’s music can be reinterpreted over and over again and in wildly different ways. The trouble is that these reinterpretations are rarely successful. Cover versions in general always run the risk of either diverting so far from the original that there is little point in advertising it as a cover version at all, or creating a slavish and therefore futile copy. Whilst Moondog’s catalogue opens itself up to being re-thought and re-configured the real issue is keeping the original spirit of the music. It’s this that is the crux of re-imagining Moondog and it where most people fail.
Hobocombo are on to their second Moondog inspired album. Sensibly, I think, they have taken the opportunity to move away from simply re-imagining his music and instead have used the ethos of Moondog for their own compositions too. What we have then is a mixture of Moondog and new work and the result is an intriguing one.
They start off simply with Moondog’s Theme and Variations, a synthesiser drone with what sounds like bagpipes on helium playing a repetitious refrain.  They then quickly up the ante, and demonstrate their new direction with Desert Boogaloo. An original composition, this is where the album really begins. It feels as though it could have come from a Moondog track but the song itself is a more muscular beast than anything Moondog could have created. The beat is tribal and has elements of both Mariachi music and ‘Caravan’, the Duke Ellington staple. There is a degree of menace but also the sense of a journey and the menace gives way at points to a carnival atmosphere. Atmospheric and catchy as hell it is probably the highpoint of the album.
That sense of a journey makes sense: thematically the album is about exploration: as they explore the directions Moondog’s music has taken them, so they have allied that to geographical directions, even imagined directions. East Timor is a wistful cover of the Robert Wyatt song. Utsu is back to Moondog, but Moondog with Steel drums, ghostly moans and a drum breakdown. There is something of the ‘exotica’ about it but nothing of the easy listening. We’re a long way from Bert Kaempfert’s Swinging Safari.
Canon #6 is more recognisable as Moondog but this is Moondog as played on a Casio for a wholly inadvisable Pensioner’s Night. Baltic Dance is another Hobocombo number. One doesn’t immediately think of Nordic folk music when hearing it; rather it starts off sounding quite post-rock, reminiscent of Tortoise. Then we have a rather charming chorus and the song keeps up an almost pop-like sense of joviality.
Response, which uses snippets of Moondog lyrics but is otherwise another Hobocombo original, is a bluesy number, starting with a wandering electric guitar before being fleshed out with voices, drums and trumpet. It continually threatens to break loose but never actually manages it, remaining taut and controlled all the way through. The album finished on a high-note with Five Reasons, the lyrics taken from an old English drinking song. The song bounces and lollops along before the song is sung old-school monk style. The track then continues to build and fade until its conclusion.
If there is a criticism to be made of the music it is that there is something slightly elusive about it: whilst it is enjoyable to listen to it doesn’t hang around for long in the memory. But this is a minor quibble, and hopefully one that will become redundant on future listens.  What is certain is that, even when they are creating their own music Hobocombo manage to evince a greater understanding of what made Moondog great than almost any other interpreter. Their own compositions also show that should they ever want to cast off the Viking cloak they will very successful in their own right.