There’s a reason we’re not called The Blissful Joy of Living. Maybe it’s not as blunt now that the songs are changing and there’s a little more room to breathe.

There’s a reason we’re not called The Blissful Joy of Living. Maybe it’s not as blunt now that the songs are changing and there’s a little more room to breathe. 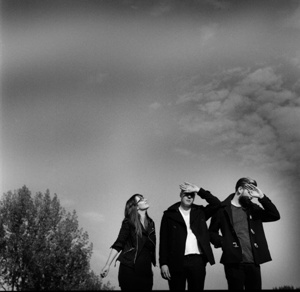 The Sweet Release of Death are not everyone’s cup of tea. They’ve somehow fallen through the cracks in Holland, and often been dismissed as also rans, or something that just doesn’t fit. And now, suddenly, they’ve made a debut record which, while not in any way perfect, is a massive leap forward and something of an eye opener. In fact, in parts, it’s brilliant guitar rock.We got hold of Sven and Martijn to talk through what has changed and how they’d made their LP, Bulb.

IN: So this new record, you’ve finally sweated out a long playing LP at Corno Zwetsloot’s Next to Jaap studios; tell us how that went? Fun? Hell? Sturm und Drang? Tell us about making a record with The Master.

Hell, then Sturm und Drang, then Fun. We’re talking chronological order here. After two days we were ready to jump off the barn we were recording in. It was like this…

Corno said: Do you want to have fun, drink some beers, take it easy, and record an ok record? Or do you want to work hard and record the best record you three can possibly make at this time? He added that if we chose the latter he would be brutally honest and wouldn’t spare us even one bit, but that would be our choice. Of course we were feeling really motivated and chose the hard way. That’s when he unleashed the fucking fury.

To cut a long story short our band dynamic was crap. Just total shit. We were on our own islands, so used to playing squats and crappy rehearsal spaces where we couldn’t hear one another that we weren’t playing together as a band. He just slapped us in the face with it. He recorded it and let us hear it. And we heard it. First we panicked, got depressed about it and we wallowed in self-pity for a bit. Then we just started to work.

We practised non-stop for something like a week, just focusing on the dynamics. On top of our other troubles two songs just weren’t working in the studio and we didn’t have enough material to be able to just scrap them and forget about it. We rewrote 90% of one song on the spot and scrapped the other one. Then we sat down late at night and wrote two short experimental pieces in its place, one a ukulele song, the other just strange guitar sound with some bleached out vocals. That all happened so naturally, it was just working, like something was slowly clicking into place and from there on out it started to get better, we started to feel it, and we were having fun.

Rehearsing paid off, the songs started coming together; we started to play together as a band.  He really pushed us when we needed pushing and it was painful but we came out of it better and more aware of ourselves as a band.

IN: I heard you at Haagse popweek, where everything seemed to go wrong – and YET your new songs sounded spacious, ambitious and very poppy, very different. It was really noticeable. Can you talk us through what kicked off these new songs?

When we started out writing songs, one of us wrote a song and brought it to rehearsal. We learned and performed that song. That’s gone now, that’s a thing of the past. There are still times when someone brings a riff or a small idea to the table and we start with that but most of the times we start out in rehearsal just making sound, and eventually something will sound good, someone will start singing and the whole mess will evolve into a song right there. If it doesn’t, then we stop and we throw it away. We’ve tried forcing songs into existence and it just doesn’t work. It either comes naturally or not at all. The new songs you’re hearing and the songs on the album are a product of this way of working and you’re right, they do sound very different from the things we used to play, and we think it’s for the better.

IN: And Alicia and Martijn now share vocals which I think is very refreshing, why did you look to do that?

Actually this is something we’ve always done; maybe it’s just that much more noticeable now in the newer songs where there’s more space to hear it. The both of us have always written our own songs so it just made sense for the both of us to sing, we never gave it any thought. Actually Alicia has been singing a lot of the newer songs with Martijn being too busy making strange guitar noises so he needs to step his game up.

IN: There used to be a lot of angst and anger with SROD, that still there? What were you trying to emote?

It’s still there. There’s a reason we’re not called The Blissful Joy of Living. Maybe it’s not as blunt now that the songs are changing and there’s a little more room to breathe. Life is bleak and hopeless sometimes, you fuck up relationships, you have no idea where you’re going, and you repeat your mistakes, things like that. We just take that and turn it into noise and song and let it out. Our music is kind of like a form of meditation; these songs just sound soothing to us.

IN: Or has it been drunk away on Katzwijm beer?

We (Martijn and Sven) definitely drunk a lot away at the Katzwijm beer party, but mostly brain cells and our reputation as sober and intelligent young men has been destroyed forever. We were not ready for the Katzwijm beer experience (who is? – Ed) and we both ended up blacking out. Sorry Corno… Alicia helped us survive and drove us home so to her we owe our lives. Katzwijm beer is fantastic but please drink it responsibly (impossible – Ed). Much like recording this album, we had to learn it the hard way. 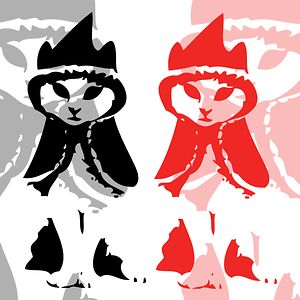 IN: I think you occupy a strange position in the current Dutch guitar scene, a bit like April, you are very noticeable because something about you just doesn’t fit. Do you feel that?

We’re definitely feeling that. We’ve played a lot of shows where people were just looking at us like “what are you doing?” and we felt no connection whatsoever. Those have been really painful gigs. We’ve been described as a Shoegaze band so many times we aren’t even keeping track anymore because people just can’t seem to place us. But slowly and surely there are people getting what we do, even liking it, and we’re also growing as a band. Our songs are getting stronger and that’s helping us getting our point across. It’s also been hard getting into any kind of scene, we feel like outsiders. It’s become painfully obvious that we don’t really fit in and we’ve just accepted that now. That’s working out better for us, but it’s definitely part of that anger you’re hearing.

Maybe it’s a good thing. It’s keeping us hungry and on our toes. We want to move forward, that’s something you can see and hear, and it brings a certain energy and ferocity to the things we do. At least we sure as fuck hope you’re hearing that.

IN: You played Poland recently, tell us about that, what’s the scene like there?

Crazy. Totally crazy. We had no idea what we were in for and it was kind of a rollercoaster for us. We got selected by the Popunie (thank you forever) and we ended up playing Soundrive Festival with bands like Conan Moccasin and Still Corners. We played the last day of the festival, and some bad luck had us playing 10 minutes before the headliner of the festival (iamamiwhoami) We thought there would be no-one coming, but people actually skipped the headliner to see us. We played one of our best shows, and we ended up partying till 6 in the morning with these awesome Polish people, some of which play in awesome bands like Brooks Was Here, check them out. We’re going to try to go back to Poland and play some shows with them, that’s totally on the agenda this year next to releasing the album.

IN: What things influence you musically? (I know it’s a shitty word, but it’s quick and easy to use, excuse lazy journalisms) I’m hoping you’ll say stuff like Spike Jonze and his City Slickers and not Joy Division…

Anything really. Alicia’s annual winter depression has brought us many songs. We’re big fans of the work of Miranda July, which mostly deals with the existential problems of completely ordinary people and cats. “Eeeee eee eeee” which deals with the existential problems of dolphins. There’s “Adventure Time” which all three of us watch. The Dario Argento movie Suspiria. If we’re talking about music, female singers from the 50’s like Julie London, Brenda Lee (good choice – Ed) and the Caravelles. We love those sad and corny love songs, they have such an eerie feeling to them. We’re a sad and corny love song band. 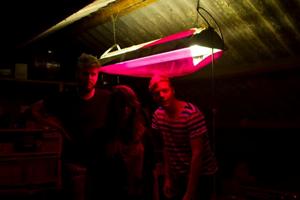