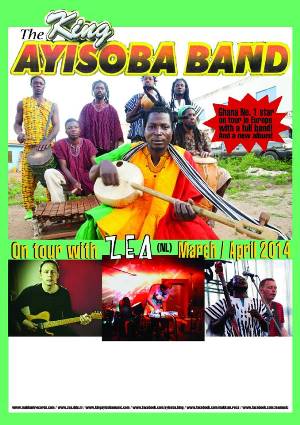 What to expect from the mighty Ayisoba? We’d seen him having a fag outside whilst leaning on a ruddy great stick with an animal head on it, so we thought “nope this won’t be your average meat and two veg gig”.

What to expect from the mighty Ayisoba? We’d seen him having a fag outside whilst leaning on a ruddy great stick with an animal head on it, so we thought “nope this won’t be your average meat and two veg gig”.

Worm, Rotterdam; I love that place. It’s a place that takes my money with a smile. All that lovely unlistenable vinyl in their shop, the weird DVDs, the incomprehensible books I really want to buy but know I’ll never read. The strange seating arrangements that run on grooves which threaten to crush your toes. And weird toilets that look like the pod Derek Smalls gets stuck in in Spinal Tap. Oh, and bar staff that are by turns recalcitrant, charming, brilliant and inept. But man I don’t care, it’s the place to be, it really is; especially when you have a cracking line-up like this night’s. Incendiary were there mainly to check out King Ayisoba’s band. You see, we dig him, and this isn’t some trendy love in on our behalf for all things African pop. Oh no. Ayisoba had previously entertained us in an Ethiopian restaurant with an impromptu set on the kologo – something that required a lot of participation from a number of baffled diners. He gave me some of his cooking spices which have since proved more combustible than asbestos. His last record, Modern Ghanaians, is a stone classic, too. But it wasn’t just Ayisoba, the support looked great as well; Zea, aka Arnold from The Ex, was his main prop and opening the night’s fun was Oscar Jan Hoogland who sounded weird enough to be right up our street.

Now what to say about Oscar Jan Hoogland. I really don’t know. I’m sorry, I just couldn’t get his vibe. Maybe we weren’t tuning into his frequency; maybe the solo electric clavichord hat he has seemingly built all by himself needs a special sort of approach. Because what we heard was a whole load of, nay, a bucket full of white noise; literally emptied out in front of us. In a way it was like inspecting fish entrails or animal organs; lots of oozing, slimy, shimmering goo that had no structure or shape, and was – by its very nature, somewhat off-putting. I think I need to inspect his sound further, but in a live setting, and with no other focus but a bloke sitting down mucking about with electronics and handmade instruments, it was pretty difficult to get a grip on. What obviously was making a whole load of sense to him was making none at all to me.  Oh well.

Things lifted up in mood when Zea bounced onstage. Zea’s new LP, The Swimming City is a fine, multifaceted thing. Now, I’ve always liked de Boer’s inquisitive, gently bantering approach. And I’ve always appreciated his patience with which he sets out his ideas. And his new record is softer and more pliable too; something which allows him to stake out a live set that doesn’t just rely on an energetic thrash-through of those quizzical, punky vignettes he specializes in. The LP’s Dutch (Fries) language tracks, Ik Kin Der Net Bij and De Swemmende Stad got aired; in fact they were the strongest tracks on the night. You see, whether he’s singing in incomprehensible Fries jargon or not, Arnold’s quite a soul boy beneath all that bluster; and he’s one of the few who can pull of being that most dreaded of rock beasts, a singer songwriter. Simply because he’s patient, and knows how to bottle up tension in short, repetitive, and quietly sung phrases. So the quiet stuff was pretty brilliantly executed, but there was plenty of explosive passages too; and we got his trademark pogoing about especially with I Build My Own Town, but always balanced out by brilliant, expansive tracks like All Words Have Been Here First, and People Shrink, People Grow, both highlights of his new material. We even got a (deserved) encore, with some old songs thrown in, and all was well with us and him.

Well, what to expect from the mighty Ayisoba? We’d seen him having a fag outside whilst leaning on a ruddy great stick with an animal head on it, so we thought “nope this won’t be your average meat and two veg gig”. And we were right, but we still weren’t prepared for such a committed and multidimensional show. I say multidimensional because it was a brilliantly paced set; compiled from many different angles, ideas and performances. First we had a set of drum and xylophone solos which were pretty fucking marvellous, and utterly hypnotic if completely unexpected. Then the band wandered on, and started to add sound to the beat with a sort of percussion instrument that looked like a mix between a melon and a cushion, and a hunting horn. Then we got the man himself, with his trusted kologo guitar; timing his entrance to a tee, even though he also seemed just to… sort of, well… wander on… and then all hell broke loose.

The next twenty minutes or so was a blur of brilliantly heady, goggle-eyed rhythms and counter-beats. Everything started to mash up into this pulsating stew of noise. And Ayisoba, like some wizard in charge of a six horse sleigh, bleated mightily like a sheep, called out to the forest animals in a language handed down to him by his ancestors, (no, really, I shit you not), cracked the sonic whip and sped off; there was literally nothing else to do but to get down. Impetus was also given by some ferocious (and I mean ferocious) leaping and dancing about on the stage, as two of the band/retinue took us through a whole host of kologo dance moves. (Note: these dances require an athleticism beyond most devotees of the tap room bar).

We decided to sit right at the back to take the rest of this in; of course it’s great to dance along (though I do try to avoid all those “look at me dancing to African music” heads who really should get their 1st World chips off their shoulders) but it’s also great to soak this sort of pulsating vivacious stuff up in a sedentary position.

Further relief was given as King Ayisoba went off, doubtless to perform an incantation backstage, and another of his band took up kologo duties for what proved a log, charming (and I am really sincere about that, please note) and pretty fucking psychedelic set of ballads; a sort of strung out, kologo take on Shuggie Otis; strange as that may sound. People grooved along dutifully but it wasn’t really what they wanted. No matter; this section proved to be another angle on the night, as all hell broke loose again when Ayisoba returned for another round of getting down.

Yup, we are that.

By this time most people were pretty much on their backs, and after some heady shuffling, grateful for Ayisoba’s last act. Calling on Zea to do a duet, the pair brought the place to an absolute stop with an incredibly sensual, and angry cover of Leadbelly’s “chirpy” Bourgeois Blues. Ayisoba’s brilliant, screaming incantations fitted like a glove over Zea’s mellifluous and incredibly sensitive guitar lines. By the end the pair were on the ground, curled up in an almost foetal position and grumbling in an antediluvian manner on Worm’s stage floor.  Fucking marvellous.

Nowt much to add really, apart from you should really, really check out King Ayisoba.