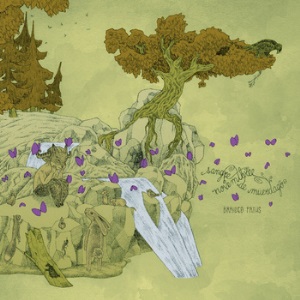 This record begins with 43 seconds of the sound of footsteps squelching through the undergrowth. It’s a very weird start to a record, and one that may well have you scratching your head, BUT you really should stick with it. I mean, what’s at the end of these footsteps? Where’s this person going to? Weird… In any case, I’ve just told you that it starts with 43 seconds of footsteps so there’s no excuse. It’s what reviewers are for.

ANYWAY, after that, we get the most exquisite Gothicke folk, à la Witthüsser and Westrüpp or Valerie and Her Week of Wonders; weird pastoral essays (sung in Spanish) that feel charming and unsettling in equal manner. The side entitled Sangre De Muerdago is the work of a Spanish crust-core musician known as Pablo. Though there’s nothing remotely crust about any of this, quite the reverse. This is faerie music to get utterly lost in; tracks like Saudades are timeless and multifaceted; but again, this is a music that never lets you settle. A pagan spirit that runs through the tracks like 53º 40,6 N 008º 06,3 E  a spirit that’s far too wild to be brushed up, or presented as a plaything. It’s mesmeric.

Now this is a split LP, and side two is taken by American band, Novemthree, who plough a fairly similar, if more rootsy furrow. The mercurial spirit of Sangre De Muerdago is replaced by a set of melancholy, if steady campfire laments; pastoral for sure, and very much in the manner of the stuff that British Sea Power’s Hamilton conjures up. In fact This Is My Home and Othala could be classic British Sea Power B-sides, the frail pastoralism and woozy psychedelia offset by a slightly deadpan delivery. It’s really great stuff. Bet is saved till last, with the entrancing The Serpents Skin, which is as close to a lost Wicker Man outtake as you can get.

So, regardless of the footsteps, a record that’s certainly worth your time, especially if you are feeling meditative.