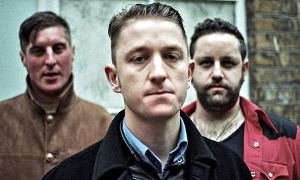 The singer Dale Barclay – wearing some gauzy snakeskin shirt and high-street chain bouncer’s kecks – prowled around like a dog locked up in a high rise.

The singer Dale Barclay – wearing some gauzy snakeskin shirt and high-street chain bouncer’s kecks – prowled around like a dog locked up in a high rise.

WHY do I always walk to the wrong Tolhuis for gigs? I’ve done that three times, ending up outside the old building rather than the conference centre. Will Incendiary ever learn? Probably not. Maybe it’s psychological, because I’m still not sure about this place, it’s a bijou function room masquerading as a temporary “North of the river” venue; or at least Tolhuis is trying to pretend it’s a groovy temporary “pop up” venue, even when it’s not. It’s weird. People lounge about uncomfortably, you pay with PIN and the sound’s too harsh, too clean. Too loud and defined. Ach. It’s a strange old place. Regardless, we got two great, if contrasting gigs; (we didn’t stick about for Petit Noire, due to train connections) one full of fire and brimstone, the other whimsical and funny.

First up was Francois and The Atlas Mountains, whose LP is a nice, sometimes very enjoyable set of pop tunes. We were interested to see whether they would beef up or strip down their LP, which is very mannered in places, wondering whether added bite would take it up another level. Within seconds of viewing the band, however, Incendiary realized that eclecticism was the order of the night. Confronted with a lad on bongos, stand up drummer, synth, guitars and bass, (and realising we would get loads of instrument swapping) we took a deep breath and waited for the whimsy college rock to start. See, Incendiary likes their bands to go for the jugular, however weirdo they are; nowt wrong with cleverness, or interesting sounds or any of that, OF COURSE, but it is a good rule to keep things simple and direct in our books. The clever stuff can augment the message; not cover up a lack of anything else. So we were panicked at first; I mean the band went through this routine of daft dances (lots of knee bending and pirouetting) and their upbeat racket started – worryingly – to sound like It Bites. Luckily their innate pop sense got the better of them. The LP reveals a love of African music (never a bad thing however trendy) which kicked in and clicked with the audience. Visibly relieved, they beefed up the sound and started to lay down an incredibly charming, mercurial and offbeat take on pop. Even the dancing fitted. They have a wonderfully uplifting side to them; a sort of gauche silliness that is intrinsically linked into their melodies and something that is wide reaching in its effect. Thing is, if we didn’t feel to feel compelled to feel so BLOODY WELL OPEN MINDED from the word go; I’d like them a lot more.

And now for something darker. We’d heard a lot about The Amazing Snakeheads from pals back home, and were excited to see them. The room seemed up for it too. There’s nothing like watching a well-heeled Dutch audience looking up to the produce of the British estates and terraces to entertain them. Fat Whites, Fall, now Snakeheads. It’s a well-worn trope, we find. Thing is, that “born of the gutter” thing can only go so far. There’s got to be something else and luckily this band has it. The singer Dale Barclay – wearing some gauzy snakeskin shirt and high-street chain bouncer’s kecks – prowled around like a dog locked up in a high rise; taking a swig of red label when required, and then then taking stock to bawl out his message. That bawl is something else, too; an angry howl from the solar plexus. The sort of thing you hear when someone gets absolutely cunted in the afternoon and breaks down about his kids or his team. Not something to be at close quarters to (seriously, don’t go there kids) but on stage it’s affecting beyond belief, especially when it’s meant, and lived, which is undoubtedly the case here. Barclay’s guitar ripped and chopped out some gritty, blues-tinged riffs that sometimes went up a notch and sounded like a wrecking ball (especially in their single Here It Comes Again), and the bass and the drummer (who looked like he was on day release from school) locked and  hammered out a set of taut, insistent patterns. I don’t think they’re the regular band, maybe they’re the new band, in any case they were fucking good. Snakeheads have some incredibly affecting tracks; Flatlining and Can’t Let You Go being a brilliant one-two (excuse pun) on the night. There’s this weird football/Roxy sax take (à la pissed up Bogus Man) on Joy Division or Birthday Party going on too; I know that sounds daft but it’s there. Regardless of what we thought, the band went down a storm, this brooding menace works live, and the theatrical way Barclay  worked the crowd (arms out, eyes screwed shut, sweating out gobbets of Scotch)  was just what people wanted.