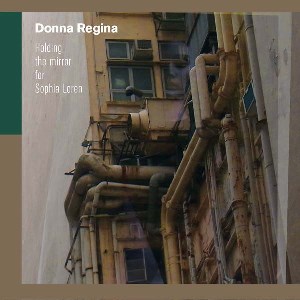 Brilliant, it really is the perfect set of miniatures. Get it, give it three or four plays and you’re hooked.

Brilliant, it really is the perfect set of miniatures. Get it, give it three or four plays and you’re hooked.

Golly Mick, this is a tremendous pop record. Packed full of intelligent things and inspirations (such as Corbusier, bass clarinets and Japanese mountain ranges) it may be, but what makes Holding The Mirror special is its incredible simplicity. When talking of Wheeler’s Oyster Bar proprietor Bernard Walsh, Dan Farson said the restaurant’s success was down to simplicity; “the hardest standard to achieve”. And this is what we get here; simple songs, perfect pop; pleasing and immediate whilst part of something bigger, something indeterminate, but something you want to know better. Best of all, none of the clever stuff gets in the way of a very pleasurable listen.

Make no mistake when I say these are truly great pop songs; I really mean it. Leaving, I Wanna Know or Gatsby are so frank and disarming you can’t help but get lost in them, despite the ridiculously simple lyrics, stripped down nature of the sound and relative lack of flourish, instrumentally. The same can be said with Escúchame, even though it’s in Spanish and I can’t understand a word. You see, there’s this trippy insistence in all the music on Holding The Mirror; it never misses the trick of knocking the melody line into your head at the earliest opportunity. Carlos has the same stoned beat and happy go lucky feel as Anne Cessna’s classic Talking to Cleopatra. And the easy on the ear Cities seems to be driven by a poppy mash of Landed-era Can, (musty, groovy, weirdly fuggy) and some mutated chill wave. Not that you’d notice, you’re more taken up by the brilliant singalong nature of the track. Perfect pop this, playmates, with nothing to prove.

It’s a very, very spacey record too; with a massive emotional and intellectual background. Tracks like In The Company of Friends and  Koyasan have a whole netherworld of subject matter backing them up; there’s a hell of a lot going on, or suggested, in these tracks, and the way they are put together hints at long hours of refining the message, to get the pitch just right. Nothing is left to chance in their creation. And sometimes the shortness of the tracks is a real bonus; Lift Me Up floats around in a little dream world of its own making and pricks your imagination just long enough for you to notice that it’s gone. Brilliant, it really is the perfect set of miniatures. Get it, give it three or four plays and you’re hooked.