When abstinence and excess had rendered me peanut brittle: as vulnerable as an altar boy hearing the sacristy door lock and the soft thud of liturgical vestments.

When abstinence and excess had rendered me peanut brittle: as vulnerable as an altar boy hearing the sacristy door lock and the soft thud of liturgical vestments. 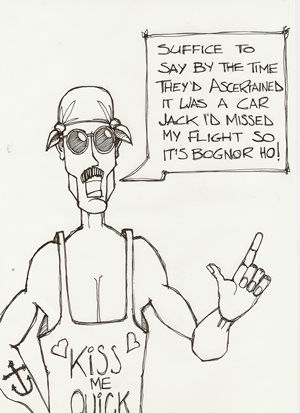 It couldn’t be last orders? Eleven hours? Inconceivable. We’d only popped in for a sharpener. My better half would be incandescent. The last time I’d texted was when we’d arrived; misinforming her I was stuck in traffic.

I turned to my companion. Never seen him before, and, based on his bemused countenance, I might have been Adam. Perhaps I’d dallied longer than supposed.

‘I’ll leave it there,’ I slurred, pulling on my coat. ‘Can’t hang around here all night chatting at you.’

Painfully pinballing through the car park, arms and legs flailing wildly, making it home alone was the height of folly. Thankfully, salvation was at hand. Literally. The park palisade not only presented a perfectly placed panacea, it was also within staggering distance.

Grasping first one metal spear. Then the next. Then another. I dragged myself along. Initially hard, exhausting, once a rhythm was established it became second nature. Travelling by rail is always relaxing and, content that I was getting there faster than Network Rail, considered the previous night.

Snug as a bug in a rug, the witching hour waxed and waned. JC would soon be demanding why he deserved abandoning. But I was prepared. A pre-emptive, excoriating verbal assault primed and ready to launch on arrival.

‘You’ve got some nerve. I was abducted by aliens and you didn’t notice, or were too crapulent to care. You’re unbelievable. Well at least you had a good time!’

The hour grew larger, and, like my cocoa, tempers cooled. Anxious cogitation bubbled subterranean. Perhaps he’d be found frozen foetal on the doorstep: a desolate dipsomaniacal dispatch from a deranged deliveryman. But, before the ineluctable speculative super-inflation, a distant commotion, disembodied thud. Then, crash! The creature from the yellow lagoon burst in, mumbling incoherent about Tenko death marches, Mancunian Taxi drivers and demanding the head of Liam Gallagher, before collapsing, comatose, clothed across the comforter capturing me.

Faux outrage denied. Disappointingly there would be no histrionic blame game. Negating the inevitable fisty cuffs and mutually assured eviction.

I struggled free. Moving him demanded pulleys, so I retired to the airbed. Deserved penance for my transgressions, although, in case this wasn’t enough, I removed his smouldering shoes. Washing his extremities rejected upon viewing.

It transpired he’d left Heaton Park by the wrong gate and only realised crossing the M62. No wonder his feet throbbed so. Rather than keep me awake their insistent pulsating formed a soporific counterpoint with window-rattling snoring.

‘Park Clock. End of the line. All change.’

Disembarking and continuing would prove problematic, but, inconveniently, the fence and route diverged. Where is my HS too?

Dutch courage foaming over, confidence was not lacking. ‘Even fascists can put one foot in front of the other. How hard can be?’ Given the two hours it took to complete five hundred yards, considerably harder than it appeared. Mercifully no goose-stepping had been attempted.

I arrived home. My extended absence would be contentious. A drinking session measured in days is hard to justify. After a weekend pass impossible. It would be easier persuading Charon to accept an IOU.

But all was not lost. My better half would be residing in Nod. A considerate entrance could reap rewards not whirlwinds. From the moment the key eased imperceptibly into the lock, till I slipped soundlessly secret between the sheets silence reigned: a master class in stealth that Raffles would have applauded, while church mice snuffled uncomfortably. Had the stairs been covered with rice paper I’d still have left no trace.

Let us be candid. My behaviour would not go unpunished. Like a literate president on September 10, I knew the assault would come in the morning. When abstinence and excess had rendered me peanut brittle: as vulnerable as an altar boy hearing the sacristy door lock and the soft thud of liturgical vestments. But I was sated and happy. Woozy waves fondling febrile fronds. Why worry about my imminent eunuch-ification when there were more interesting things to ponder. Mainly; could Mani rejuvenate our failing ceramics industry?

With thanks to Dominic Salmon.

Mr Watt would like to apologise for the protracted period since his last mawkish missive, but he was abducted by aliens. Drop him a mail via the editor if you desire to know more. Incidentally can anyone lend him a jack?