It’s good to know that The Generator could add something genuinely different (musically, or in ambience, if nothing else) to Leiden.

It’s good to know that The Generator could add something genuinely different (musically, or in ambience, if nothing else) to Leiden. 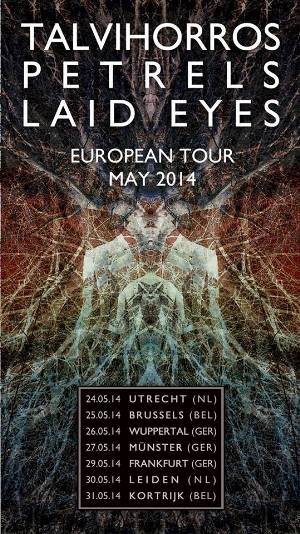 A new place in town, and no we’re not talking about de Nobel! Well, the Generator’s not wholly new but it’s our first time in the refurbished upstairs of the Vrijplaats; and we have to say that the place looks really swell, especially when you consider that all the props and décor have been collected and installed for the grand sum of nothing at all. The Generator’s musical brief is – simply – no beats, and peaceful. This is mainly due to the fact that Vrijplaats sits in a residential neighbourhood; but with a bit of ingenuity in the programming the place can serve up the real deal and with Petrels and Talvihorros showing off their skills, that’s what we got.

We’d seen both acts at Le Guess Who? May Day edition the Saturday previous, but then they’d both put on such a show we thought a repeat helping wouldn’t go amiss. Both seemed to play different sets this time around; maybe it was the atmosphere; The Generator basked in the mellow, late spring sunshine, in complete contrast to RASA’s “theatrical” darkness. Consequently the shows by both acts seemed less intense, but maybe more playful and multifaceted. And because both acts rely on a visual ingredient, the setting sun’s rays (streaming through the glass roof) became an active element in the show. This was a bigger deal for Petrels (aka Oliver Barrett) as he was on first; but somehow it helped. The sun’s last hurrah fried the visuals (created on this tour by Laid Eyes); making the backdrop look like some giant display of bad photocopies, or a massive old valve TV giving out its last signals. Given that Petrels’ music has this very dry, almost dusty side to it this perceived effect worked brilliantly on the night. The set was taken mostly from his latest 12; The Silver Chimney / Wat Tyler which builds on his fascination for all things old or esoteric. Appropriately – I suppose – Barrett started to merge folksy elements into the weird throbbing clash of existential and modernist patterns. Whilst there are LOTS of people doing this at the moment (David Chatton Baker and Ian Humberstone spring to mind – all that Devon Folklore Tapes crowd) Barrett’s muse is somehow tougher, trying to link now and then through waves and eddies of white noise, an approach that could be about 13th century hoodlums or a 60s high rise estate. It’s mining the same seam, after all.

Suitably fried by the backdrop, and enervated by the thin “metallic” textures of Petrels’ set, the audience prepared for something more direct, darker. Ben Chatwin’s (aka Talvihorros) Muse is, well, sexy, more pronounced. It has a sort of concentrated, “sock it to em” aspect; both in terms of persistence and colour. And, on this night, the elements came into play once again to reinforce this feeling. By now the place was dusky, though not totally dark, and as such Talvihorros’ backdrop had a real impact.  A series of strongly coloured shapes formed, disappeared and reformed – almost like an abstract canvas being wiped and restarted, whilst Talvihorros built up rich suggestive urban soundtracks that had a district 70s feel about them. Yes the Eno reference has to be made but in a really, really good way. There’s no suggestion of copying here, what Talvihorros does with that format feels natural, and wholly appropriate. At times the music started to take on an elemental quality too; the rich textures and suggestive cues acting almost as a comfy limo ride, easily ferrying the audience’s collective mind round the room;  a sort of abstract voyeurism triggered by looking at a load of coloured squares. Sounds crazy, non? But hey, that’s what went down.

So, a great night all round, helped immeasurably by cheap, good beer. And it’s a crying shame we missed the Fabio Orsini gig there. But hey it’s good to know that this place could add something genuinely different (musically, or in ambience, if nothing else) to Leiden. We await the Edgar Froese show (ahem).