See, WOLVON aren’t just this gonzoid bunch of Northerners whose sound reflects the fact that they wouldn’t know how to eat olives.

See, WOLVON aren’t just this gonzoid bunch of Northerners whose sound reflects the fact that they wouldn’t know how to eat olives. 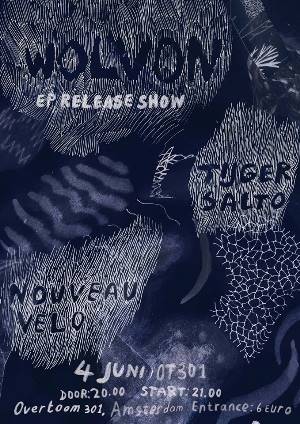 OT301 is a great space, despite sometimes feeling a wee bit detached; there’s a sense (which I think you are supposed to buy into) that you’re hanging out with “real” squatters; a feeling enhanced this particular time by the presence of a new Dr. Rat portrait in the OT courtyard. Real deal or fakers… we couldn’t care, as we were there to see Geertruida’s new act, Tijger Salto alongside Incendiary faves Nouveau Vélo and WOLVON. The latter were headliners, as was only right and proper; after all, Groningen’s “Beard Division” (ho ho) were presenting their new 12” to the world. But first, Tijger Salto. I’d heard great things of their gig at SUB071, and I could on the evidence of the OT301 show believe it, though probably not in the way you’d think. You see; what I meant by writing that is that the band (probably through no fault of their own) only hit the heights sporadically at OT301; due to the differences in the two venues’ sizes. SUB071 is tiny and confrontation is a necessary part of the pact. You can’t hide (unless you physically leave the SUB) and both bands and audience need to grasp that nettle. Now, Tijger Salto’s BIG trick live is to confront and carry off the audience over their shoulders, like some spoil of war. But in OT301 there’s room for an audience to hide or ignore a band; so, Tijger Salto’s wordy, high octane declamations hit an invisible wall; there was no audience interaction, the crashing sound the band cranked out diffused across the space. To use (another) military metaphor the band also advanced on too broad a front and didn’t penetrate the enemy lines deep enough to secure a breakthrough. That wide stage, the gaps at the front (most of the punters preferring to hang back) and the iffy sound (fucked tweeters) created problems. Each foray seemed to bring diminishing returns.  But that’s the bad stuff out of the way. The good stuff is that they are angry and direct. No wall flower nonsense here. Energy – however abstract or harsh – is their loadstone. Added to this, Tijger Salto set themselves up as Savonarolas of the scene; looking to bark out their discontent at every opportunity. They do all of this in the way D.A.F. did, in a dizzying, non-stop manner; each declamation building on the last. Given that the band also thrive on high tempo confrontation, it’s easy to believe what they do if you get caught up in this post-post-rock assault. It just needs the right setting or a Plan B, you ken?

After this, Nouveau Vélo. What is it with this band? They are a surprising bunch; you think you’ve got a handle on them (in that you think you can pick their sound out without any worries) but they just keep surprising, merely by working and working on their sound. Catching you out along the way.  On the night, the Vélo had the same issues as Tijger Salto; if anything an even more indifferent audience reception and weird sound devils that meant you could hear Niek’s guitar better in the foyer than in the room. Having that, the live set is immensely improved; they are MUCH better as a live band for a number of reasons. Firstly, Rolf throws more of his own personality from behind the drums into the mix. He dances, he yells, he plays his part in making a racket; his drumming improved immeasurably, and you can see this in the way that much more of his personality goes through the rhythms. Given the band stand in a line, Rolf’s new confidence means that the onstage dynamics are miles better. Niek’s always grooved along to the sound of his own guitar but now Rolf’s antics throw much more tension into the set. No longer looking like three animated toys in a shop window, the band seem to pull and push their own music about on the stage, with bassist Bart providing a steady, balancing element in the middle. Secondly, we can really get a hold on what the new songs are about; at the very least it’s noticeable that they are more direct and honest in feel. I’m not saying their old pop songs weren’t heartfelt, I’m sure they were, but in a live setting they were like incomplete sketches that left far too much to lazy imaginings or the comfort of the buffet/”lekker achtergrond muziek” crowd. Too easy on the audience in other words. Now, the band wants your attention. Finally the sound (even though it was pretty weird on the night) is a lot more nuanced; no longer over-long tremolo-heavy guitar jams with a sketched out melody line, but a rounded, jagged and soulful pop sound that  has something of the late Undertones about it; something brisk, challenging and with bite. So, all good, maybe more; and they are slowly coming into their own; it’s just a shame on the night the atmosphere wasn’t as charged or as compact as it could have been.

Things did get charged for WOLVON though. The band has come on leaps and bounds this past year; and playing every rock and roll toilet they can find has paid massive dividends. For sure they are still messy and still sometimes prefer to batter and wail their way out of a sticky situation, “jazz-style”, but by gum, compared with the half-formed, self-conscious Gonzo ramblings of two year ago or so they are flying; and turning into a band made of steel. A bit more of a push and they could really get people to sit up and listen here. See, WOLVON aren’t just this gonzoid bunch of Northerners whose sound reflects the fact that they wouldn’t know how to eat olives. The band has this effervescence about them that is special; they just refuse to get caught up in home-grown bullshit, and they are aiming at places ideas and visions that have no reference points in NL. And even better, whilst they may be deadly serious dudes underneath all the hamburger and joint aesthetic, they wisely channel any intent through their music.  So we get this laughing daredevil approach to rock music that is also a very open and honest; and not looking to slag anything off. It means you can let your hair down AND feel the fucking NOIZE, the making of which, on this night, WOLVON indulged in like a set of 4 years olds left in a room full of crisps and face paints. Their sound is getting close to the barnstorming racket of early Hawkwind or Pink Fairies; modern, “Dutch” takes on Do It and The Snake, tracks like Smooth Skull and BTHR veritable underground crashes of rolling noise. A brief garbled interlude saw the band come on and batter out Future Truths, a modern classic if ever there was one. For once audience and band met on the astral plane, the sound melted the walls and shit got slightly out of hand. Great stuff. WOLVON are going places; that is, if they really put their minds to it.