No longer difficult, or cussed, or looking to smash down walls, Space Siren have decided to dwell in a time of their own. And it really suits them.

No longer difficult, or cussed, or looking to smash down walls, Space Siren have decided to dwell in a time of their own. And it really suits them. 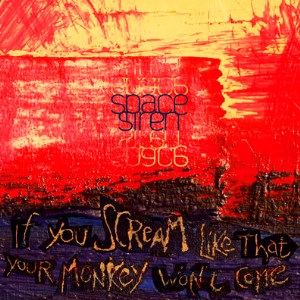 It’s taken me ages to find a way to review this latest LP by Space Siren. It’s a record I have played more than any other this past week, and still the essence of it eludes me. Under ‘normal circumstances’ that would be fine, of course; because you buy a record (or stream or whatever) and you listen to it, and you don’t worry about summing things up. You just listen and you like, or you don’t like. But I’m the fucking reviewer; I have to tell you what it is about and display the kernel, the entrails, what makes it tick. You know all that pompous reviewer stuff of explaining where this work sits in the grand scheme of things. Until I realised that was the point of this LP; there is no kernel, there is no centre. Space Siren have made something organic, shape shifting, between worlds. This LP is one of those long, slow processes between body and mind; between the corporeal and the external object, where you and it knit together. You become used to each other and finally you start to transplant elements of each into the other.

Let me tell you now, this is an extraordinary record; at once removed and startlingly direct; tracks like Evidence Collection Guidelines and If Clouds Were Clouds velvet gloves hiding a pair of iron fists. The crash and slow burn of their noise has never been better captured. No longer difficult, or cussed, or looking to smash down walls, Space Siren have decided to dwell in a time of their own. And it really suits them.

Oh yeah. I had this mad theory about the members of Space Siren; that they each captured an element fire water air and earth. I used to think I was a mad, pretentious twit for thinking this. You see I only thought it out when I was pissed after a gig and had seen them blasting out their noise. But this record captures that idea, and like some mediaeval apothecary’s wettest dream, Space Siren throw these elements at you one after the other. You’re not sure where you stand, whilst listening, only you are being transported from one element to another; from scorched earth guitar lines, to ethereal, lyrical gauze, to the steady, rhythmical lapping of water on some secluded inlet… from one viewpoint to the next; like some balloon ride through space, some mad extension of Cervantes or Baron von Munchausen. The Secret Apple Garden could even be something off early Tangerine Dream. Where to get a hold on this elemental fucker? Contrast the sultry Is It Because of That Movie, or the sweet One Cold Winter’s Coming Up with the searing crash of Pick Me Up and the opulent haughtiness of Psycho. These are moving fucking passages of sound, people. This is something else.

Even the titles are like some inscription on a Victorian chemist’s shelf – obtuse, involved with something else entirely, drawing a bit from the Cocteau Twins and their own sense of fun; wearing lace ruffs in the Bollenstreek, showing a cut of a different cloth, a whiff of Belladonna amongst the piles of gaasbakken.

I’m not sure if any other band are going to top this release, as a rock record. I’m pretty certain no-one will.