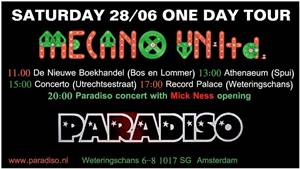 Incendiary may well be guessing here, but probably the last time Mick Ness and Dirk Polak were together in the Paradiso in a strictly musical capacity must have been around 1981.

Incendiary may well be guessing here, but probably the last time Mick Ness and Dirk Polak were together in the Paradiso in a strictly musical capacity must have been around 1981.

A tale of two returns; both with an ULTRA twist. Think of this; Mecano (now re-named Mecano-UnLtd) and Mick Ness playing on the same bill at the Paradiso. Two names to conjure with from the times when Jim Kerr used to wear make-up as a matter of choice. But both are back; albeit after a fashion. Mecano’s splendid new LP Erector Set Rebuilt has seen them play a couple of impressive gigs at the Melkweg and Rotown, and Mick Ness’s strange and beguiling LP, The Joy of Pop, has been revamped and reissued. Incendiary may well be guessing here, but probably the last time Mick Ness and Dirk Polak were together in the Paradiso in a strictly musical capacity must have been around 1981. No matter.

The upstairs room was filling up nicely with a strange mix of young backpack types from places like Greece and Israel (where Mecano are pretty big) and a bunch of older Amsterdam (post)punks; some with their families in tow. In the main hall Jurassic 5’s hip-hop shook the foundations of the building. Their fans, (30-somethings in baseball caps) sauntered around the place, putting their heads round the upstairs room’s door; doubtless wondering what weird act had attracted such a mixed audience. In amongst it all, Dirk Polak and Mick Ness greeted people and chatted on, as if at some strange official ambassadorial reception.

When Mick Ness finally got his band on stage and struck up the opening chords of Open Rooms, Incendiary were knocked out. Frankly we’d heard nothing like this since we went to see Gong at the Boerderij a decade ago. But unlike Daevid Allen’s pranksters, there was no real pantomime on show. Ness, looking dapper in a 30s suit, and sporting a very “80’s” pair of ad exec specs concentrated on letting his strange “non-80s 80s sound” infiltrate the room. The band’s sound was a real bric à brac of Doctors of Madness, Magazine, Gong and John Foxx’s Ultravox. Tracks like Walk on Heads and Burn Me Out Again were artsy, restless, will o’ the wisp tracks with a heavy undertow; presenting a sound and approach that allowed the right amount of early Thatcherite/ULTRA grime and gloom to infiltrate the hall. Some of the tracks were extraordinary; long, drawn out, but punky thought-pieces and reflections set to music; a wee bit like Street Hassle, what with the melody line seemingly following the singer’s train of thought. But Street Hassle speeded up and given a sneering Euro sheen. And Ness’s strangulated, rasping attempts at singing in an alto added to the strangeness of the music; with the smart suit and carefully combed hair just adding to the alien nature of it all. As a slight contrast, (probably down to the exuberance and “can do” nature of his band) the gig was experimental in tone and sometimes betrayed a feeling of a late hippie jamboree or “play in”, what with the use of violins, cow bells, blocks, and in (guest musician) Dirk Polak’s case, a whisky bottle. After about 5 tracks Ness went; giving no encore. What a performance. Strange and brilliant in equal measure.

Mecano’s gig was long in coming; the anticipation steadily built up courtesy of a strange, Tarkovsky-style video that accompanied the brooding, dubby instrumental known as The Indoor LandArt Soundtrack  both combining to create a suitably moody visual/aural backdrop. When the band finally started, they crashed through a set of new things and old faves with a shocking amount of purpose. I say shocking because their toughness and focus is really something to note; as well as their ease with each other. It was also noticeable that this was a much more eclectic set than at Rotown; with lots of new tracks thrown to the lions in the audience. Given that, it’s great to report that Polak’s writing skills haven’t dimmed in the slightest. The band’s new material like Single Splits and Environmental Twist – certainly when presented in a live setting – stood up incredibly well alongside old favourites like In Still Life, Permanent Revolt and Dissident Lament. In fact they confirmed a brilliant continuation of Dirk Polak’s Muse. Polak’s warm theatrical prompts on the night didn’t hurt either; giving a confidence and stature to these newer songs. Of course the old material like the aforementioned, and Robespierre’s Re-Marx was thrashed along to with gusto – by band and crowd alike. After all these are great songs; Untitled, Meccano… you name them. And the band knows this; adding a real thump and the twin guitar attack stripping some of the artsy 80s stylings away to reveal a rockier side to the music. This brazen, no holds barred showmanship was working a treat with the crowd looking to jump about at any opportunity. For sure there was a fair degree of hamming it up throughout, but Mecano are a band who can get away with this kind of approach with a fair amount of charm; probably through the fact they are still, after 30 odd years, running to stand still. The fact they still want to belt out their expressive racket live is proof enough. Some bemused hip-hop fans even stuck about. Will miracles never cease?