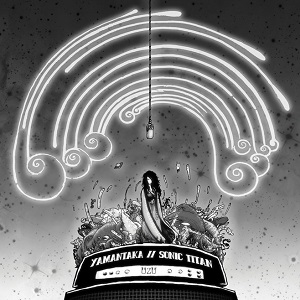 Well, this record is immense. Immense, stupid, funny, baffling, annoying; the lot. I can’t begin to describe it, outside of the fact it’s a TRIP.

Well, this record is immense. Immense, stupid, funny, baffling, annoying; the lot. I can’t begin to describe it, outside of the fact it’s a TRIP.

A very good friend of Incendiary (and mighty writer) Cath Aubergine told me that when Yamantaka // Sonic Titan  recently played at Primavera festival the skies (and here I quote Cath) “turned from bright sunshine to the Rain Of Doom”. This should be no surprise. This is the sort of thing we should expect. I have no doubt that Yamantaka // Sonic Titan are able to change weather patterns, turn into sea monsters at the drop of a hat and have teeth made from rare bimetals. They also drive cars powered by bananas. Their mythical status is such that even when faced with the most ridiculous, improbable, pointless and derisory musical “journies” they undertake them, and come out the other side with everyone else wondering “why didn’t I have the balls, or wit to do that, like that?” Such is the new record made by Yamantaka // Sonic Titan; a rock opera of sorts called Uzu.

Loathe as I am to ever quote or use band biographies, I feel we can make an exception with Yamantaka // Sonic Titan. I think this is both illuminating and defining, and goes some way to adding to my introductory hyperbole.

Thanks for that. But what of Uzu? Well, this record is immense. Immense, stupid, funny, baffling, annoying; the lot. I can’t begin to describe it, outside of the fact it’s a TRIP and it’s LOUD and there are GUITARS and BANSHEE WAILINGS and there are TWO SONGS ABOUT SEASICKNESS FFS; and most assuredly one to get drunk to whilst listening. What listening to Uzu does mostly, though, is leave me wracked and spewed up on the creative shore, shriven by defeat, bereft of words, unable to encompass (outside of the dryest most bullshit non-academic pretend academic rock writing) what I think about the record. I suppose, if pressed, I’d say that this is the record my teenage self and mates would have played cards to in their fetid, wholly male (but not through want of trying) teenage attic hideaway alongside Iron Maiden’s dreadful but hypnotic live LP and AC/DC’s Back in Black. An enclosed, weird world defined by its own joshing logic. It’s a similar record to Mike Patton’s April, a review of which a decade ago led my esteemed co-editor Damian Leslie to talk about the squirrels in his garden. A menacing world where atavism is only a guitar lick away.

What more to add, really?