Things are looking dire for Baz, and if he wants to avoid a future slurping Super Noodles in a damp Damascus bedsit whilst working on his right arm, he needs big bucks fast, which means a new job.

Things are looking dire for Baz, and if he wants to avoid a future slurping Super Noodles in a damp Damascus bedsit whilst working on his right arm, he needs big bucks fast, which means a new job. 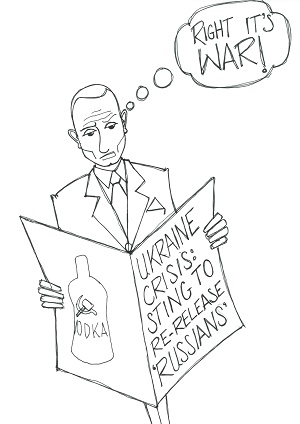 Armageddon draws nigh: Ebola encroaching on European shores; Putin aggressively gerrymandering, and Islamic State scouring the Middle East. That did not terrify me. That was somebody else’s problem, although I’ll never buy another Lexus: naming a sports saloon after terrorists is perverse. The unlikely revelation that Barry and Asthma al-Assad were entering Eurovision, however, wrenched me screaming from Slumberland.

This epiphany occurred during a prolonged bout of thinking and drinking: a moment of clarity celebrated with enough hard stuff to floor Marlowe and Morse. Only the uncertainty stopped me sinking a slug of drain cleaner.

Conspiracy theories are for the deluded, but this had legs. I just needed to find out how many. Thankfully strong-arm shenanigans, stakeouts and contrived meetings with femme fatales weren’t today’s special. Eurovision has a press office. Most of the people I deal with don’t. The low-down was a call away, and nobody’s kidneys would need kneading. Slipping my favourite knuckleduster back in my pocket with a kiss, I picked up the receiver. This would be easier than getting a canary to sing.

‘There is no need to raise your voice, sir,’ the oh-so polite woman articulated in an accent dominatrices spend a lifetime perfecting: Ilsa She Wolf of the SS, with a hint of Joan Collins. She had a point, but fourteen transfers and being on hold for over ninety minutes was forcing me into the red. Thankfully, while waiting I’d been treated to a medley of Eurovision hits, from Conchita Wurst’s inspirational Rise Like a Phoenix to Dick Byrne’s magnificent The Miracle Is Mine, soothing enough to stop me yelling: ‘I know where you work’, grabbing my friends Heckler & Koch and catching the first plane to Switzerland. ‘All requests must be submitted in writing. I will furnish you with our address.’

The letter thudded into the red box. Four weeks, ample time to ponder why Assad would enter Eurovision. Experience suggested a dame. That meant Asthma.

An ex-hedge fund manager who married a dictator doesn’t come cheap. The sort of gal who doesn’t do war. Prefers lounging by the pool, sipping martinis, or admiring immense pyramids of chocolates at an ambassador’s party. Trembling in a bunker, picking body parts off dagger heels isn’t her style. She signed up for Monaco not Mogadishu. These last few years will have been tougher than being gay in Russia.

In the beginning it’ll have been easy. A dictator at 35 and the Axis of Evil’s ‘one to watch’, Barry had it all, money, power, full liquidation rights. Irresistible to the immoral, and Asthma will have fallen hard. Treated like a princess. Showered with gifts. One glamorous evening after another. To a simple girl from Acton it would have been a fairy tale, but those days are gone. Long gone. Even if Assad succeeds in crushing Luke and the rebel scum, what will be left? An apocalyptic wasteland and an empty bank vault. It’s the end of days, and Asthma purring ‘no money, no honey’ in his ears night after night, will inevitably have him washing down the Zopiclone with a bottle of the hard stuff.

Movie star looks could help, but resembling the offspring of an anorexic weasel and Hitler lacks mass appeal. Asthma on the other hand is not a bad looking broad. Bilbo boxing Bruno, he’s punching well above his weight. He knows it; she knows it. And there are a lot of dashing dictators out there who can keep their subjects in line. Fifty large says her eye will be wandering, indulging in intimate chats with Put-in, swapping late night texts with Kim Jong-Un and exchanging mawkish missives with the Sultan of Brunei.

In the past when she strayed he no doubt took her to the Axis of Evil Christmas party, the glittering social whirlwind that won her black heart. But since Forest Bush and Bitch Blair won the War on Terror they are best avoided: where once Saddam and Muammar’s pantomime ass Ronald Bray-gun whipped by the O-man induced hilarity, broken men reminisce round oranges studded with pineapple and Emmenthal.

Things are looking dire for Baz, and if he wants to avoid a future slurping Super Noodles in a damp Damascus bedsit working on his right arm, he needs big bucks fast, which means a new job.

Despotism’s been good to him, but it’s no longer a growth industry, with applicants far exceeding positions. Before answering the ‘dictator wanted’ ad in The Daily Mail being an ophthalmic surgeon paid the bills, but doesn’t stretch to shoes requiring a mortgage. Software tycoon could work. A salary that compares well with GDPs is appealing, but Asthma’s wouldn’t consider someone with visible BO, hair courtesy of mom’s pudding bowl and bottle-end glasses. Plus she likes bad boys not nerds. Which leaves pop super stardom, and, as Abba, Celine and Julio – worth $300 million despite coming fourth – have shown, winning Eurovision is the fastest root to that goal.

In a way this is a love story, and if it did not involve such cruelty, it would be inspirational. Assad will do anything to keep Asthma, even humiliating himself in front of 180 million people.

Obvious when you think about it. With that sorted out, I had to work out what to do with the remaining thirty four minutes, twenty three hours, six days and three weeks. Time I certainly wouldn’t waste…

Next issue: The green, green gas of home