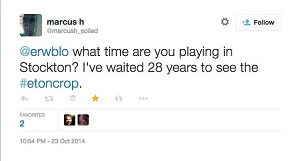 Violinist Adrian lets us know that he left the Netherlands that night, because he can’t stand missing the gig. ‘I’m absolutely fucking determined.’ He drives from Gorinchem to  Calais, takes the tunnel and then drives all the way up to Stockton.

Violinist Adrian lets us know that he left the Netherlands that night, because he can’t stand missing the gig. ‘I’m absolutely fucking determined.’ He drives from Gorinchem to  Calais, takes the tunnel and then drives all the way up to Stockton.

Erwin Blom, leader of brilliant Dutch ‘post-punk’ noiseniks Eton Crop promised to tell us about the band’s recent (as in very recent) mini-tour along the North East coast, which took in Gateshead, Scarborough and Stockton On Tees; the latter town hosting the Peel Regenerated bash, which sounded like a right laugh. Erwin’s band haven’t toured abroad for donkey’s years and we thought it’d be fun to get him to share his thoughts. Over to you, maestro; walk the dog.

And this is only the first day… My guitar amplifier stops working. Violinist Adrian phones that he can’t make the tour because of a death in the family. Musical mates The Nightingales drop out because their guitarist has sliced his finger off loading the vehicle for a gig in London. And we haven’t heard a thing from the club where we are supposed to play on the first day. This reunion tour of Eton Crop starts to feel like a case of Murphy’s Law; everything that can go wrong will go wrong. Or better, like a case of Finnegan’s law: Murphy was an optimist!

We haven’t toured in decades. Eton Crop wasn’t around anymore when Stephen Harland last year asked in the John Peel Sessions Facebook group whether we still existed. To remember John Peel, Stephen told us he was organising the Peel Regenerated festival in Stockton On Tees, and would like us – as a band with 5 Peel Sessions under the belt – to be part of the day. We owe John Peel a lot, that’s why we immediately said yes. So we put the band back together, and we asked the same friends from back in the day to join us for a small club tour. Asking around, spreading the word, inviting yourself, a small tour is easily sorted. And then just do it!

We took our old places in the van (me left behind the driver) and left. The boat from IJmuiden to Newcastle was rough, but first stop The Black Bull in Gateshead was rougher. This was a timewarp to 1977. All the old names on the posters, all the familiar bands on t-shirts, the music from then in the jukebox. This is a place where Sex Pistols, UK Subs and The Clash still rule. This is a club where studs and safetypins are still part of the dresscode. The Black Bull looks like a place from the seventies, with everybody a few decades older and more than a few pounds fatter.

OK, what do we do? We started in the punk days, but in the end we’re more pop then punk. We decide to add a bit of punk to the set. We play faster, we play louder, we work harder; and that pays off. The energy comes across. We do two encores and are satisfied with day one. And we like The Black Bull. Because where do you find Crass on the Jukebox? Where do you hear The Modettes being played? Nowhere. It was good to go back in time!

Day two brings us to Scarborough. The fact that headliner The Nightingales aren’t coming is a shame. Not only for the organisation, but for us as well. We played a lot with them years ago, and would have loved to meet Robert Lloyd again. But there are more artists! There’s four of us playing on Scarborough John Peel Day. And we go back in time again. Not with the bands, not with the audience, but with the venue. The Corporation Club is an old workmen’s club. It look like it hasn’t changed since the fifties. And that looks good.

David Yates and his musical partners put up a super evening. And it is fun to meet people that have all your records, it’s nice to meet others that are looking for rare Eton Crop stuff and it’s great to meet a father that travelled for two hours with his 12 year old son to be here tonight. ‘I went to the Wedding Present as well with him. But he thinks you are better.’ Nice one! Meeting people like this is the reason why you play live. 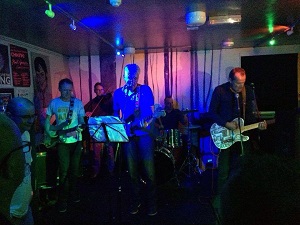 Last stop: Stockton On Tees. A text message comes in. The UK trip started with bad news, but after the initial problems,  everything is going well, and it’s all been fun. And it’s getting better! Violinist Adrian lets us know that he left the Netherlands that night, because he can’t stand missing the gig. ‘I’m absolutely fucking determined.’ He drives from Gorinchem to  Calais, takes the tunnel and then drives all the way up to Stockton.

When he arrives, Peel Regenerated is already in full effect and Stephen Harland and Martin Mathers put together a super festival with top acts like Pellethead, Terry & Gerry, Blue Orchids, Wolfhounds and A Witness. There’s two rooms and we play the Green Room. Really small, but really good. This is the gig that made us reform again and this is the gig we give everything we have. We play tight, we play energetic and we love doing it!

And even better: the audience loves it. It’s fun walking around the festival people coming up to you to say how much they loved it. And later the reactions on Facebook and Twitter. ‘Best band of the night by far’, says Dave Griffiths. Alan Morrison: ‘You were my favourite band of the day. And there were lots of great bands.’ Birst Hirst: ‘You were great in Scarborough but even better at Stockton.’

It’s a day later, when we’re travelling home. A message from Stephen: ‘Are we on a repeat booking next october, Erwin? We had a lot of positive comments about your performance.’ That’s the biggest compliment you can get as a band, that a venue immediately wants to book you again. Of course we said yes. This was meant to be a one off thing, but it’s too much fun not to go on. Music is the best thing there is and playing live was as fun as it’s ever been. Thanx, all!

get a hotel today… before the idea slips away…