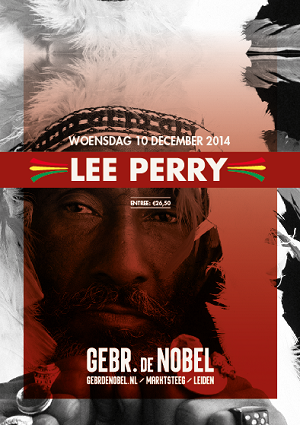 Well; that was a night and a half! Leiden met Lee Perry. Hold onto that thought. And that meeting came about in the new De Nobel building; which is a really nice set up, warm in feel, boasting great sound, and staffed by some decent people. Even better, you can experience a weird sense of spatial dislocation in the building; due no doubt to the heavy doors that seem to lead to nowhere in particular. It’s something which disorientates you. I really (and probably perversely) like that detail, though a number of people looking for the toilet failed to see the funny side. When it gets a coat of rock and roll grime on its shiny new surfaces, (and a place for oldsters like me to sit down) de Nobel will turn into something really cool. Incendiary hung around the mezzanine and then waltzed into the main hall to catch Rainford Hugh Perry (with a new, younger band in tow, called The Belly Rats) kicking things off with a steady groove.

This was a show of two sets; the first hour or so was decent enough if pretty restrained. To be honest the bass could have gone up a notch; just as things threatened to go spacewards they were reined back. No matter. And as ever, Perry slung out his deep wisdom, cloaked in the thickest patois, confounding the Leideners with a range of wisecracks and inverted “logic”. We got some old faves on that score; “teachers are fools cos they trained to fool ya”. He may have a point. And did we get Blackboard Jungle and In The Iaah as a backing to Scratch’s rapping early on? It sounded like it. Perry snotted on a towel, sat down on a monitor (flanked by some tea lights, a bowl full of sweets and his flightcase) and held court in this groovy phase. We proceeded to get quietly drunk and ran through our terrible reggae moves. Shit was good.

The second set of the gig was blinding. Legendary, in fact. We got the lot; run ins with the security, fights in the crowd (I think over some bloke getting pissed with Scratch, who basically was propositioning his missus on stage, with his mic: “you come back wid me lady, ok?”) some suggestive onstage twerking (from the lady who Scratch took a shine to) and some absolutely shuddering basslines (that HAD gone up a notch, several in fact). We also got some lunatic court jester stuff from Scratch including a hand shaking session with the front row, an interesting lecture on the correlation between Christianity’s fave son and female sexual organs, some hopping (“can you do dis? I can, touch ya toes and touch ya knees if ya please”) and more Gnomic wisdom. And did we get Zion’s Blood? It sounded like it.

The gig ended on a fabulous reggae-rock wankout by the band; Perry having wandered offstage with the mic. It worked great actually, and I’m not normally a fan of that extended solo stuff. Afterwards we grooved to the discoman who knocked out some rocksteady. Top night all round.