Assad makes Stavros sound like Sewell and would be pilloried. A punk standard with incomprehensible lyrics would disguise this flaw, as well as his inability to sing: demonstrated by his karaoke performance of Don’t Stop Believin’ at Mugabe’s ninetieth.

Assad makes Stavros sound like Sewell and would be pilloried. A punk standard with incomprehensible lyrics would disguise this flaw, as well as his inability to sing: demonstrated by his karaoke performance of Don’t Stop Believin’ at Mugabe’s ninetieth. 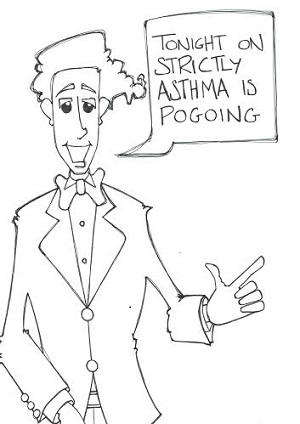 Despite its kebab shop genesis, my investigation had revealed that Bashar al Assad, desperate to save his marriage, risking ridicule and derision, was performing the Dead Kennedys’ Chemical Warfare at Eurovision.

Everyone knows this august institution favours a pot-pourri of power ballads, caterwauling Continentals and the sweetest bubble gum pop rather than hardcore punk classics. So why had he chosen a preposterously unsuitable song dealing with an utterly repugnant subject? (Despite inspiring superlative works like Dulce et Decorum Est and ABC’s Poison Arrow the default stance on chemical weapons is still abhorrence.)

He’d obviously misinterpreted the meaning. Mistaking it for a paean to chemical weaponsinstead of a caustic dig at the idle rich. Despots, unlike the general public, desperately desire deadly devices. Poison gas may not be the ICBM with multiple warheads and 800-megaton payload at the base of the mushroom cloud, but it certainly separates the dictators from the merely domineering.

Do not judge him harshly – leave that to the Almighty – Davie Cameron believed that The Eton Rifles was an celebratory chorus to his Alma Mater not a damning indictment of the Etonians’ savage attack on a peaceable Right to Work march. In mitigation, I thought Paul Weller was Yorkshire born and bred and the song a tribute to Eton T’rifle – Eton Mess to those not born under the White Rose of York – the only non-revolting product the catamitic concentration camp has produced (not that pulled prole and suckling oik are without merit).

The song’s panicked shrieks are harder to misconstrue, but we are all a product of our environment. In my house the only screaming occurred nine months before my sister was born when mater was obviously distressed, but thankfully it ceased after ten seconds when pater raised her spirits with a rousing chorus of God Save the Queen. For Assad, a house reverberating with agonizing howls meant the torturers were working hard and papa less inclined to random acts of cruelty. Deep delving analysis, however, is unnecessary as, after four years of massacring freedom fighters, terrified cries simply highlight the timely death of opponents.

The choice of song may have been a misunderstanding, but instinct suggested something more pragmatic.

Men and women are different. From Nena to Sabrina, female accents make the banal entrancing, while, in the aftermath of Joe Dolce’s Shaddap you Face, foreign male vocalists are persona non grata in pop’s pantheon. Would Abba have taught the terminally Lambrinified and menopausal to sing if Benny and Bjorn had commandeered the microphones? Assad makes Stavros sound like Sewell and would be pilloried. A punk standard with incomprehensible lyrics would disguise this flaw, as well as his inability to sing: demonstrated by his karaoke performance of Don’t Stop Believin’ at Mugabe’s ninetieth. (It’s online if you fancy a hilarious visual interlude, although use hearing protection.)

Admittedly singing and elocution can be taught, but when a tank crashing through the wall while you’re watching ‘I’m a Dictator… Get Me Out of Here’ is not inconceivable, it’s no time to be hiring a vocal coach. However, a life spent screaming at subjects means he could teach Violet Elizabeth Bott a thing or two and can do a suitably discordant impression of Dead Kennedy’s lead singer Jello Biafra’s strangulated delivery.

Asthma lives for the limelight, but as Assad’s accent and inability to hold a tune ruled out a traditional duet her presence on stage was superfluous… unless she was his dancer. Jed Hoile to his Howard Jones. Which explained why she was studying dance in Hartlepool under the cruel tutelage of Mr Sleep.

But was Wayne’s awesome ability to trip the light fantastic the only reason she’s split Syria? Chemical Warfare does not favour a Charleston or Cha Cha Cha. Proponents pogo – not the sort of dance you need to learn. (I mastered it after seventeen cans of Looney Brew, and was revered all the more when I forcefully regurgitated them, although I prefer sneakers to six-inch dagger heels.) Perhaps, as the recent cover of Dictator’s Wives showing a well-coiffured rodent leaping overboard suggested, was Asthma abandoning a sinking ship? Recent US-led attacks against Assad’s enemies have shored up his borders and regime, but nothing is assured, and as an ex-banker she knows the benefits of hedging your bets.

Wrong! All wrong! Four weeks sofa-bound had reduced my brain to cottage cheese. A ferocious sapping was required to beat some sense into me. I hurled my glass against the wall in a shower of shards and scotch, and took a deep incendiary pull from the bottle.

These arguments were logical, but apologetic. Blaming your serial killing on mummy for neglecting the breast. The motivation of a bleeding-heart liberal not a dictator. Barry had slaughtered over 100,000 innocents, intellectual machinations weren’t his style.

I’d been underestimating Assad. Treating him like my typical clientele. This wasn’t a cheating husband or maxed out gambler fleeing the mob. This was a man who’d played chicken with a super power and America blinked first. A man who’d led the UN on a merry dance. Stepped boldly over the line in the sand sarin gas in hand. A gambler who’d risk it all on one turn of pitch and toss.

After an eternity of photographing trophy wives and their toy boys, finally a worthy opponent.This was no misunderstanding or subterfuge. This was a calculated move. I needed to dig deeper. Much deeper. Get in Assad’s head. Think like him. And then, and only then, once I understood why, could this atrocity be averted.

He may have fooled the rest of the world… but he wouldn’t fool me.

Next issue: The green, green gas of home