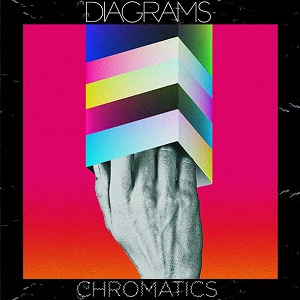 Ah great, Diagrams are back! We really liked Sam Genders’ last record, Black Light, with its calm, soulful pop. And like that record, Chromatics, slowly grows on you to the extent that you end up humming it in idle moments. Truly, the soft power of pop. However this one is different; somehow it sounds like Genders has relaxed a bit. Something did feel out of sorts on Black Light. This record, however, feels like there’s a much calmer hand on the tiller.

And once you get through the whistling on opener Phantom Power (which does make it probable that it will be soundtracking an insurance ad anytime soon) you can settle into these luscious pop tracks. To be fair, and in a gambit typical of the LP, Phantom Power does have a marvellously rich refrain that erases the chirpiness of the whistling. Second track Gentle Morning Song is brilliant; big-hearted without being slushy, starry-eyed but sharp, and benefitting from the sort of crisp, dry-sounding arrangement that allows everything to skip along at a decent pace. Oh and it ends in a nice, tumbling mess. You can say the same about the gloriously catchy Dirty Broken Bliss, which seems to invert and update Black Light‘s template. Pop records often need a spruce, brisk spirit to gee them along, and this one has it in spades. At times – such as the chorus on Desolation – things sound a bit like Shack at their softest; big choruses that are deliberately underplayed, probably down to the reflective subject matter.

Now and again Genders’ other band Tunng pop up in our memory; courtesy of the title track and the beautiful, open love song that is Serpent. But mostly we get heartfelt, open and honest songs like You Can Talk to Me, Brain, and Shapes, which manage to be both private tête–à–têtes and built for a big audience. It’s a rare knack. And things are always kept that leetle bit leftfield. As such the record is always surprising. You can hear that at the end of Shapes and in the woozy, so-obvious-its-great singalong of The Light and the Noise, whose melody nods to a whole load of things, from Gruff Rhys to Stone Roses.

Deserves to be a big record, does Chromatics. I hope Mr G takes this the right way, but this LP is akin to something like White Ladder. It’s almost the perfect alternative pop record; with enough to satisfy urban existentialists and garden centre visitors alike.