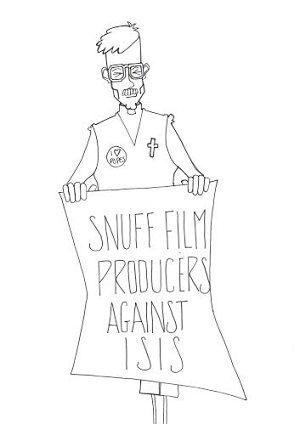 He was deranged, but not even he would consider using sarin gas rather than dry ice during his performance.

He was deranged, but not even he would consider using sarin gas rather than dry ice during his performance.

Sometimes being a private eye’s easy. The maid’s driving a Maserati and the client’s misplaced their van Gogh. Sometimes it’s hard. That people take Nigel Farage seriously rather then laughing his racist ass out of the country still keeps me up at night. And sometimes you’re just too dumb. This case definitely fell into the latter category, which is ridiculous as it couldn’t have been more obvious.

Something record industry vultures were quick to exploit: the cassette single of Bow Wow Wow’s C•30 C•60 C•90 Go blank side two inciting owners to home tape (my favourite illicit thrill, sheep rustling excepted); Marvel comics, in those halcyon days before AIDs, printing their Kiss special in the band’s blood, and Ian Curtis committing suicide in a desperate attempt to achieve the pop stardom he craved.
Even Eurovision has been tainted: We Don’t Wanna Put In (geddit?) by cunning linguists Stephane and 3G or Teapack’s Push the Button inciting Israel to nuke Iran were both contentious. There’s even been sexual indiscretion. Despite embodying all that’s wholesome, England’s 1981 entrants Bucks Fizz’s pornographic striptease shamed a nation and corrupted a generation.

When I heard that Miley Cyrus was working as a LA hooker to promote her cover version of The Crusader’s classic Street Life I thought the nadir had been reached. I was wrong. So wrong. She’s only hurting herself. Some people were willing to risk more than a big disease with a little name and the inevitable rectal prolapse. Some people will do anything to anyone to achieve their aims, even massacring hundreds. One of those people is Assad. The Ghouta chemical attacks in August 2013 weren’t intended to break the rebel’s spirit, they were intended to promote his Eurovision entry, a cover version of the Dead Kennedy’s Chemical Warfare. Not even messy eaters Karla and Latifa would have sunk so low.

It was so obvious. More obvious than Jimmy being a nonce. Previous suppositions that he’d chosen this ditty because its screamed lyrics would mask his accent and discordant vocals or that he’d misconstrued the song’s meaning seemed laughable. Assad may have entered this competition to save his marriage, a laudable aim, wholesome even, but he was still thinking like a dictator. Yet, despite such horrendous tactics, his actions were logical.

Nothing sells better than controversy. Well maybe sex, but in countries that don’t idolise the weasel Assad’s out of luck. The amount of surgery required would be prohibitive, devouring any future royalties, and, even with the best surgeon in the world, odds on it would just be another plastic surgery disaster.

Asthma is attractive, but her refined upbringing precludes appearing semi-naked, wobbling her booty for coin. Something someone should’ve mention to the desperate Ms Ciccone three decades ago.

So what if they weren’t love’s middle-aged dream. Renée and Renate were enough for this lifetime. Anyway, no one would believe he’d turned from pariah to saint. Despite Syria’s previous when it comes to conversions, you can’t slaughter the innocent and claim you’re Mother Theresa. The public are gullible, but not that gullible. They’d be more likely to believe that Sir Cliff was responsible for the death of Gill Dando. However, transformation was unnecessary.

Bashar is the ultimate bad boy, and everybody loves a bad boy. (Well apart from The Police, although they just do what Stung tells them.) Unlike like the glove OJ couldn’t squeeze into, controversy is the perfect fit for him. He’s infamous. For half a decade he’s been front page news, and as Kim Wilde so astutely quipped, ‘there is only one thing in life worse than being talked about, and that is not being talked about.’ The only way that he could be more infamous is if he declared Syria a paedo-ocracy and opened his borders to international brotherhood of short-eyes, presenting them with complementary child of their choice upon arrival.

And, as any publicist would say – well apart from the hypocrite-in-chief Max Clifford who’s far more likely to beg Mr Big to stop sodomising him in the shower (the perfect example that what goes around comes around) – you need to play to your strengths. Which in this case means infamy and what better way to do so than cover a controversial song. He’s already associated with warfare in the public imagination, why not capitalise on that. Apart from the one they have every night where they are making love to themselves, it’s every marketer’s wet dream. All the work is done, all Bashar needs to do is sit back and reap the rewards.

It was so simple it was hard to believe it had taken me so long to work out. Maybe it was just too ghastly to accept. The sort of revelation that goes best with five fingers of the hard stuff. But why defer his entry? The chemical attacks were perfectly timed for last year’s extravaganza. And as shocking as they were, even abominations fade, especially with ISIS using pilots as candles. Surely these atrocities weren’t a trial run. He was deranged, but not even he would consider using sarin gas rather than dry ice during his performance.

Hopefully it was something less horrific, maybe he’d had stage fright or man flu or perhaps they were having dinner with Kim. Either way something had to be done. But what? If all the world’s armies doing nothing didn’t deter him, what chance did I, an over-weight gumshoe with a drink problem have. My drinking was so bad even my gun license had been revoked.