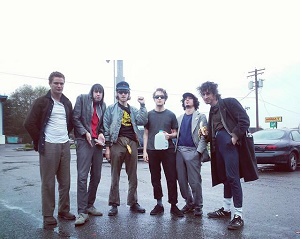 The funniest thing about this Fat White Family gig is the power of suggestion they command. I mean it matters not if they decide to do the ironing on stage…

The funniest thing about this Fat White Family gig is the power of suggestion they command. I mean it matters not if they decide to do the ironing on stage…

Ekko’s packed. People are stalking round the cosy little club with flared nostrils; swaggering about like they’re in CBGB’s or summmat.  An air of real expectation. The place is also full of familiar faces. Rats on Rafts’ entourage is out in force, having driven in from Rotterdam. Half of Leiden’s underground too. Doubtless sets of people from other towns recognise parallel “sets” of people they know. Fat White Family. A gig not to be missed.

I give the support band one track; they don’t do it for me, sorry. Back to the bar. I bump into the bassist from the Fat Whites. He looks caned, probably more knackered from the road than anything else. Do I know you? I know you don’t I? You do. We chat about books, and he stumbles off. Various members of the band are milling about the place, pacing through the venue, head down, seemingly in the act of avoiding each other. Lias is at the bar too, grabbing a red wine. It’s good to see him and we have a chat. Lias holds forth volubly, and expressively, and at length on the state of life on the road. This is where Fat Whites are now.  Putting a shift in on the road and dealing with people’s expectations. Which – if you let them get to you – is fucking wearying. The band’s now “known” and as such expected to perform in the manner they ruthlessly laid down during those scorched earth gigs of 2013-4. Previous shows in Utrecht (ACU and Ekko) were bloody deranged; loose and propelled by a sense of shock; with the band acting like Sturm Truppen, roughing up the netjes Dutch urban classes into a state of bewildered excitement. I broke a rib and did my ankle during their last two shows here. I’m fucked if I’m doing that again.

But this time round there’s a change. The band are probably more powerful in terms of sound and presence than ever before. They sound fantastic, with the new drummer adding an incredible thump and the guitars sounding dangerous and rasping. Anthems like I Am Mark E Smith, Is It Raining In Your Mouth and Touch the Leather are now tracks that present a concerted, concentrated clatter; showing a high pressure effectiveness. Using (another) classical military metaphor, they’ve switched sides; from barbarians to legionaries. A set of songs that onced aped the band of painted, naked hairies who would look to plunder the rearguard now comes on like a phalanx of determined Romans about to cut up the tribal flesh. The licks and riffs are shot through with order and discipline. In this setting, even the new lad at the end doing the Theremin thing doesn’t seem like an add on. If they carry on like this, they should do a mid-70s Scott Walker on us all, totally sell their souls and play glitzy Vegas gambling superstores; suspended above the tables and the bungers, night after night, for Top Dollar. They could easily pull it off.

Not that many notice it. The funniest thing about this Fat White Family gig is the power of suggestion they command. I mean it matters not if they decide to do the ironing on stage, as the crowd, in its eagerness to nail their colours to the mast goes ape at every opportunity. It’s great that a band can unleash such autosuggestive abandon, people were waiting for the moment when they could cut loose. And watching the crowd, it was almost like watching a video of a Queen gig from the mid 80s. Instead of Monsieur Freddy whipping up a pantomime storm, Lias goes through his routine, Saul scowls and the audience goes nuts. Bomb Disneyland unleashes a surging mosh pit, pitching and turning like a shoal of herring being attacked by killer whales. It’s magnificent, but it’s more an unwitting Grande Masque, or a fond farewell; a revel recalling another time, a time of 18 months ago when no fucker knew how to react. The gig ends, people scream for an encore (as if) and we file out for a fag.

This band will march on to other, more rarefied things. I feel it in my water.