Sometimes, I’m not quite sure what the pages are in ‘Myth…’ They could be short stories, fractured fairytales, parables, visions or unnerving news reports or warped monologues or published scratch marks on school desks.

Sometimes, I’m not quite sure what the pages are in ‘Myth…’ They could be short stories, fractured fairytales, parables, visions or unnerving news reports or warped monologues or published scratch marks on school desks. 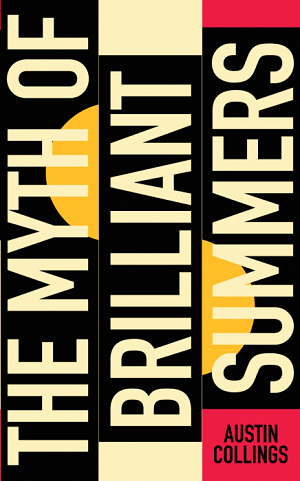 “Look closely at our Biro blue, melancholy mornings…” exhorts the opening line of Austin Collings’ volume of short stories, The Myth of Brilliant Summers. Observation is the byword in his stunning series of fractured reflections on the modern male psyche. Ostensibly based in the badlands of Greater Manchester, Collings ruminates on the minutiae of ordinary human failings amid the littered landscape in neat, technicolour lines imbued with stoical humour. Unforgettable sequences featuring lone wolf perverts, Scarface-fixated uncles and marauding squaddies permeate the text, and a superbly compassionate narrative evokes the pathos in the darkness on the edge of town.

Incendiary spoke to Austin Collings in the hungover days following the PARIAH Press book launch-cum-Norse funeral for Myth... held at the Eagle Inn, Salford. Collings read ‘Patterns’, ‘Mystery of the Half Nelson’ and an off-the-cuff one-liner called ‘Fred the Weatherman’: “The day he went down it rained.”

IN: How were the book launches in London and Salford?

AC: Part 1 was merry hell. I saw two people fall over. I’m told there were more. We left the pub knee-deep in white feathers. Our initial idea was to channel the spirit of McMurphy in the film adaptation of One Flew Over the Cuckoo’s Nest when he whisks his inmates away for a surprise boat ride. I think we succeeded.

Part 2 had a religious kick to it: candles, crosses, chaos and burnt pages from the book. Somebody said it was closer to a Jesus and Mary Chain gig than a standard book launch.

Both nights (and days after) were like a condensed ‘Nam experience for people who came down: mini tours of degenerate duty.

IN: Your methodology seems almost Johnsonian in its faithfulness to narrative truth. Johnson railed against the “primitive, vulgar and idle curiosity of the reader to know ‘what happens next’”. Considering the mechanics of the short story, would you go along with that?

AC: Despite his open distrust/dislike of ‘narrative’ and his reputation for being formally difficult or tricky, B. S. Johnson (who is one of my favourite writers) is a very readable writer and also funny in a deadpan way. The same could be said of other so-called experimentalists like David Markson, Donald Barthelme and of course Samuel Beckett and more recently David Foster Wallace. Whether it’s pre – or post – modernism is the song that never ends. What matters most is the authority on the page. Does it convince?

Sometimes, I’m not quite sure what the pages are in Myth... They could be short stories, fractured fairytales, parables, visions or unnerving news reports or warped monologues or published scratch marks on school desks.

IN: ‘The Uncertainty of Subways’ and the book trailer offer a fleeting glimpse of “a dog barking to itself, angry with itself”. Is this a comment on the state of the nation?

AC: On one level this is true, but also at a very early stage, I suggested that the logo for PARIAH be that of a dog on a cross. Jamie Lee had coined the name PARIAH after the dogs in Malcolm Lowry’s Under the Volcano (a book that we each share a love of). Since then the dogs just keep reappearing. I always thought a dog in a suit would make a good prime minister – when animals rule – a dog in a tracksuit – would be even better.

IN: The spectre of Tommy V haunts the book; a familiar, insidious presence that forces the reader to confront memories of men like him. Have you had any response from those who recognise themselves in the stories?

AC: I always liked how David Lynch used the terrifically named Frank Booth in Blue Velvet. He is a hell of a disturbance with a distinctly angry energy. I hope Tommy V is along similar lines. Re: the actual question: I’m going to swerve that in case my luck changes.

IN: ‘Wits End’ and ‘All the Sad Young Men of All Ages’ relate to a decades-old, particularly northern problem: the (in)dignity of labour and the unseen fallout of unemployment. Are you pessimistic about the likelihood of change under the present/future government?

AC: I have never looked to the world to make me happy. I barely understood the point of school. I don’t go on holiday. I also don’t understand the compulsion to flog yourself in a job that slaps you in the face every day.

Government is the big trick. We are the only animals on earth that charge one another to live here. This is what we call government.

The painful truth at the centre of the northern work problem – from a male perspective – is that most of these lads are not built to be confined by office work. Their fathers and forefathers generally worked physical jobs. They are also built to work physical jobs. Then again, my dad worked a demanding job as a hod-carrier, but I have never thought physical labour is in any way noble or something to aspire to. I’m also suspicious of leftwing writers who seem to think the 70s were paradise. I couldn’t think of anything worse than struggling down a mine.

The flipside of this is education, which is big business now. Ofsted work like a bunch of Richard Nixon’s cronies transported from the 70s. Snoops with no scruples. However, a great many people who have had a ‘good’ education and have gained their desired degree or master’s are deeply unhappy, probably more so than many uneducated and unemployed people who are under no illusions that the world can be grimly unforgiving. It’s not unimaginable to envision the western world under the control of Apple in the near future: Apple versus McDonalds at the polls.

Only yesterday I saw some poor immigrant lady stood by the roadside in Prestwich in the hail wearing a Domino’s pizza advertising board. She asked me the time. I told her and asked if she was OK. She didn’t seem to understand. That seems to say it all about the hole at the centre of now. Human billboards. Confusion. Hail.

IN: “I have lost a lot. I don’t mind. There’s always more.” The final lines in ‘Patterns’ are devastating in their simplicity; a Beckettian haiku. Is Beckett an influence on your work?

AC: Yes, especially Krapp’s Last Tape and Endgame. I prefer TV and cinema to the theatre but I think I’d make an exception for Beckett – or maybe not. I’d rather read plays than watch them: Pinter and Mamet etc. One of my favourite author images is Beckett stood in front of a lifesize bin with a brick wall in the background smeared in paint smears and splashes like those of Francis Bacon. That’s the world I understand.

IN: The quality of a short story hinges on a writer’s vocabulary, restraint and economy of language; the art of a great title too. What do you look for in a title?

AC: Great titles have a special precision. Like condensed visions, they are the eyes of the book’s body.

IN: Are there plans for another book or films based on the Myth… stories?

AC: There will definitely be another book. I’m not sure if it will be in a similar style. I don’t work like that. I’m not a planner in that respect. I’m happy to live by the second.

I’m hoping to make a short film soon: a coming of age tale where nobody comes of age, swathed in sexual mayhem. The cameraman described it as Kes meets Donnie Darko. That would be a good meeting: Billy Casper actually meeting Donnie Darko. That’s my sort of superhero film.

IN: You worked with Mark E. Smith on his autobiography: Renegade: The Lives and Tales of Mark E. Smith. How do you look back on that experience now?

AC: With great fondness. It was a magical time. Jonny PARIAH says it’s only one of three books that still make him laugh out loud continuously, alongside Fear and Loathing in Las Vegas and Catch-22. I like that.

IN: What are you reading?

AC: Werner Herzog – A Guide for the Perplexed: Conversations with Paul Cronin (Faber & Faber). It sits on my table, silently screaming at me to turn the TV off – the big black brick – demanding to be absorbed like that other heavyweight philosophical work of stoical insight, The Da Vinci Notebooks.

I have also just started Malcolm Lowry’s In Ballast to the White Sea, which was kindly sent to me by the University of Ottawa, who should be given serious credit for rescuing and releasing the brain equivalent of popping candy.

The Myth of Brilliant Summers is available from http://pariahpress.com/product/themythofbrilliantsummers/. Please support independent publishing.