Only the Throbbing Gristle/Coil axis come close to this spaceward/Satanic Mill industrial sound.

Only the Throbbing Gristle/Coil axis come close to this spaceward/Satanic Mill industrial sound. 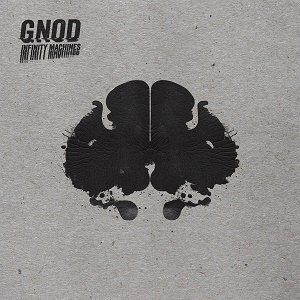 Where oh where to begin with Gnod’s new LP? It’s an utter monster. Eight mindbending tracks that look to crash through our middling daily concerns and create a headspace that throws us off kilter. I recently remarked that listening to this LP could get you “feeling” in a state of transit; like a balloon covered in static and stuck to a ceiling, there is very little point in offering any resistance until the process (here: playing the LP in its entirety) is complete.

Gnod’s  music on Infinity Machines (as with Control Systems, and the title track) sometimes takes the shape of a thick, steady lava flow of indeterminable noise and / or tectonic shifts of sound and space. Countering this (on, say, Inevitable Collateral and Desire) we have a spaced out vibe that mixes the more space dust elements of Gong’s muse, and sticks it through a cosmic sieve; constructed by Conrad Schnitzler and Edgar Froese. Imagine a Manchester warehouse being blasted (by the dark arts of The Chief Designer) into outer space. Only the Throbbing Gristle/Coil axis come close to this spaceward/Satanic Mill industrial sound. At other times (as on White Priviledged Wank and Breaking the Hex) the record sounds like all the photocopying machines in the world making a concerted attempt to make contact with us. This is truly the sound of the Earth in all its vastness, and/or all the unseen consequences of humankind at work.

It’s also possible to reference other disciplines. There’s a truly terrible bit in the documentary round “wildman” Timothy Treadwell, where Werner Herzog plays the tapes (which record Treadwell and his companion being eaten by a Grizzly bear) to his relatives. By doing this, Herzog wants to point out utter irrelevance and randomness of our existence on this earth. And although Gnod’s titles do tend towards charting the cynical and earthbound concerns we all have, there is a similar (here: musical) point made with Infinity Machines. I think they’ve made the most painterly “rock” record in years. I’d also say that because Infinity Machines, in its atmospherical, nihilistic vastness resembles not so much other records, but something along the lines of Bacon’s portaits of George Dyer, or Blake’s etchings in The Four Zoas. These images signify a space that isn’t real but – through the drama of the images and the idea that there is both something (a subject) and nothing – somehow invites all human space to clamber in.

I could go on. I think I’d be perfectly in my rights (and able to argue, however embarrassingly) that there are things in this LP that remind me of Satan’s conversations with the sun in Paradise Lost. But maybe it’s better that I calm down and try to make contact with my pre-Gnod conscienceness.