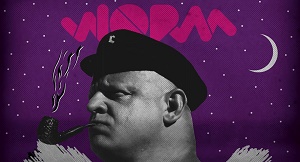 The gig was also sort of dressing up game indulged in by two grown men whilst singing about your pals, eating, sailors, and bodybuilding.

The gig was also sort of dressing up game indulged in by two grown men whilst singing about your pals, eating, sailors, and bodybuilding.

A strange evening at the avant-garde Tardis known as WORM, but an entertaining one nonetheless. After a crazy concert the previous year where the Good Captain had dispensed his love and understanding and body building tips to Rotterdam on the streets, a return had been set up in the small hall. The Eurotrash Brewery were offering their new brew, Kaiser Kuttlipp II. Louche, not to say indiscreet 8mm films played on a large screen adjacent to the stage, and tables decorated with red candles gave off the feel of a Berlin Speakeasy. Most worryingly, a coat stand stood on the stage, which meant undressing of some sort was about to happen.

I’d been asked to participate; reading some extracts from the Good Soldier Schweik in my non-existent German, which I did, badly. I’d also seen my pal Lars from Barreuh (here to present his new character, one-man boyband Victor Varalapatasio) during what passed for a soundcheck. This allowed us ingress to the backstage area where Rummelsnuff sat, immovable and engrossed in his mobile. Outside of a gruff, growled “guten abend” there was no further communication from this man mountain. Lars and I exchanged glances nervously. This was not a place to hang out in. The Captain needed his space.

Once I’d got off the stage, one-man boyband Victor Varalapatasio took over. The show was a simple one. Lars repeatedly introduced himself as Victor Varalapatasio over and over, swinging along to a jazzy beat and now and again changing his hat. More of an actor’s than a musician’s conceit, the piece was met with general but benign bemusement. It was cabaret after all. It could have gone a lot, lot further. I began to feel a marked – and growing – desire to see Victor have a nervous breakdown, Victor howl his lungs out behind the coat stand, Victor belch profusely into his microphone after a chicken dinner. Instead we had a lot of cheekiness and winning, inclusive acting-come-scatting that somehow influences a lot of acting/cabaret in the Netherlands. Aloofness and arrogance won’t always give you up! Luckily, the fact that Lars kept going on and on and on, to his audience’s obvious embarrassment was essential. It’s a dead good idea that could go much, much further, and (once an audience had negotiated the utter horror of what they were, or were about to experience) be much more satisfying for all. But would he get booked?

Then time for Rummelsnuff. Again, this was a mix of cabaret, but with a distinct Teutonic character. The gig was also sort of dressing up game indulged in by two grown men whilst singing about your pals, eating, sailors, and bodybuilding. The Captain was accompanied by a gentleman of slightly lesser build but blessed with a beautiful voice; who formed a (startling) operatic counterpoint to the gruff but friendly paternalism of Der Kapitein. Musically, we got some “gentle” techno, bracing folk, some light operetta and some good old cabaret thrown into the mix; including heartwarming songs like Der Kapt’n Nimmt Dich Mit, a remarkable take on Daddy Cool and Bratwurstzange. The Captain’s enthusiastic fan club pranced around the Leviathan, slipping up on stage to get selfies or dancing in a very gamine manner round him. But, outside of pulling the strap of his co-singer now and again, the Captain seemed remarkably unperturbed by events.

We left it there, running to get the train, leaving this colourful tableau to carry on deep into the Rotterdam night.