Raumschmiere’s newie also captures that sense of disconnect in real time that you get when staring out on a still, clear autumn day. Brilliantly. 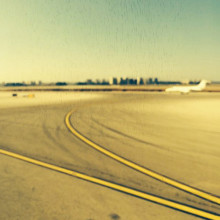 Sometimes you can play a record and it seems to offer up all sorts of possibilities up, without actually giving anything away. You can’t let the bloody record go, so you keep playing it. You leave it, only to return a day, or weeks later. Still Sphinx-like, the record offers up nothing new, but by hell, you find it a wonderful mysterious thing. You continue to ponder the signs and symbols you are given. You continue to play it. Nothing is made any clearer and you accept that the record you are playing is what it is. And no more. The new LP by T. Raumschmiere is one such record. Hypnotising, reflective, drugged, supine, secret and ultimately hiding nothing from you but your own conceit; all of those things at once.

Raumschmiere’s newie also captures that sense of disconnect in real time that you get when staring out on a still, clear autumn day. Brilliantly, it has to be said. Opener Abfahrt sounds like the score to a dream; a wistful piece not all that far removed in style from those maximal/minimal synth cats, Borngräber & Strüver. Everywhere you turn you are confonted by a dreamscape of sorts with sly nods and winks. Or a seascape. Yes I know there’s a plane on the cover but maybe this is more of an underwater record. A lot does feel connected to the sea. Maybe the clues are in the titles. Anker, Do Not Open The Hatch in a Diving Submarine…

Let’s talk some more about this beguiling music. Anker’s glutinous synth loops play against a plaintive melody of sorts, one that flits in and out of sight like the Cheshire Cat. The wonderfully named Grotznogg (can I have one?) is Eno playing a gig to 3 chinstrokers in a submarine repair dock whilst the lads get on with the buisiness of caulking; the sound of clinkers(?) being dragged across conrete floors is a brilliant counterpoint to the swells and ebbs of the synth. Shraubn somehow takes the melody of Your Silent Face and makes it into some primeval, Golem-like utterance. This may be just me bullshitting in time to the music but there again, who knows what’s going on?

Now and then tracks are given a more urgent tempo which makes for a more tangible melody, as in Zwischenstopp. Lenka splashes round in its own sonic paddling pool like a Moebius offshoot. And the laconic fog-funk of 007 (which also seems to picks up on Borngräber & Strüver’s great cover of Conny Schniztler’s Zug) is a moody, funny wraith that lives in an underpass. When Anika’s deadpan take on Nico brings the record to a close on Sleeping Pills and Habits (a track that reminds me of The Overload on Remain in Light), all you really want to do is play the LP again. I wonder why?