“The variety of the album ultimately leads to it unravelling at the seams – the songs do not cohere to form one piece of work. ”

“The variety of the album ultimately leads to it unravelling at the seams – the songs do not cohere to form one piece of work. “ 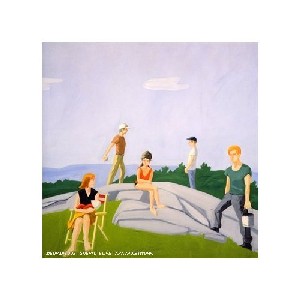 No Kids – Come Into My House


Canadian bands have been arriving, procession like, on European shores in recent years. The newest arrivals are No Kids; a three piece hailing from Vancouver and fronted by Nick Krgovich. Their debut, Come Into My House, contains an array of delicate and thoughtful songs which are so diverse it is scarcely possible to attribute them all to the same artist. What the album has in variety it sadly lacks in bravura, and each time it is played the listener is left underwhelmed. This album does not deserve to be ignored, those bored of mainstream British guitar bands repetitively churning out the same chords and solos may well find an antidote here, but this is not a pioneering or challenging work.No single song on ‘My House is symptomatic of the album as a whole, but an overarching feature of the record is the combination of metronomic percussion and traditional instrumenta. Strings, piano, woodwind and brass are audible, and much of the album’s merit lies in this carefully arranged instrumentation. One of the highlights is Old Iron Gate, and here the band comes closest to achieving their aim to create a cinematic atmosphere through music. Indeed, this could be the closest a pop song has ever come to resembling Sergei Prokofiev’s Peter and the Wolf; instruments are conspicuously used as part of the narrative structure. It is unfortunate there are not more songs in this vein on the record, but diversity is the aim here.Noticeable, because of its incongruity, is the inclusion of a mainstream R and B sound – the vocals on For Halloween and The Beaches All Closed are sonically similar to Craig David’s early chart-busting work and give the album a faltering start. These songs are weak when contrasted with the more upbeat and frivolous I Love The Weekend and piano-led opener Great Escape, both of which are more listenable by virtue of Krgovich’s beautifully fragile vocal. Different again are Four Freshman and Dancing In The Stacks which are conspicuously whimsical and born out of heady college days. ‘A wayward wind blows strong, whips me and the leaves along,’ dreams the narrator in Freshman. The songwriter’s intention is to lure the listener into his rose-coloured world of worry-free college days where students dance in libraries, but a lack of charisma means this world remains sadly distant.The variety of the album ultimately leads to it unravelling at the seams – the songs do not cohere to form one piece of work. When ‘My House hits its zenith No Kids nestle neatly with their North American contemporaries – Weekend is reminiscent of Animal Collective and For Halloween recalls Of Montreal, particularly vocally – but at the lowest ebb the album is not interesting enough to fall in love with. ‘Thank you for making it known my life’s work means nothing to no-one,’ laments Krgovich on I Love The Weekend. Had No Kids written an album which maintained the quality of their best work on each song he need not have worried, but as it is, this particular piece of his work may not reach many.Words: Craig Pearce