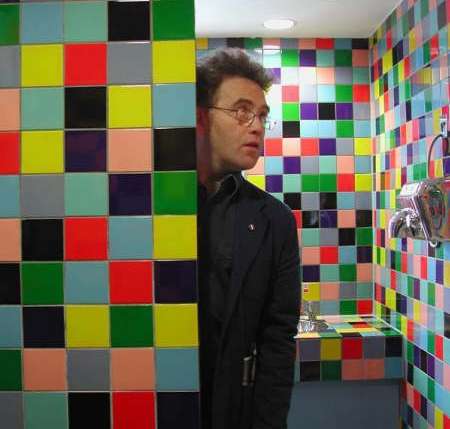 Manchester’s finest will be energising Dutch audiences with their steamy wit and socio-psychotic brand of pop throughout the merry month of May with a new LP to promote, Goddard’s Grilfriend out on Probe Records (availlable from www. myspace. com/calvinparty) and can boast John Peel sessions in 1994/95/97/2004 and festive fifty ‘hits’ with Lies, Lies & Government (Number 33 in 1996) Northern Song (Number 41 in 2004)Confirmed dates so far (ever-changing)23rd May Pacific Parc, Amsterdam24th May Taverna, Nieuwerkerk a/d IJssel25th May Get Rhythm, Ridderkerk28th May Blue Shell, Koeln29th May Sub071, Leiden30th May – Hoorn SWAF31st May – Haarlem Patronaat Cafe

Let’s say this lot are nothing if not honest (and funny). Dave and John regaled us with their thoughts and sent our pompous questionning packing. So sit back, crack a can and take a peek..

IN: Werner Herzog. Why? (I like Edgar Reitz meself)

CP: I guess its Herzog’s determination to examine that really basic and core aspect of the living condition; i.e. what do you/we do when the world, our world, turns to merde! What I mean is that, for me, his films invite a reflection upon aspects of life that maybe we would rather ignore but that are in fact salutary reminders of…….hey, I’m not qualified or pious enough to carry on…..I MERELY WRITE POP SONGS.IN: Calvin Party has had a long and eventful past. How does a band keep going after a certain point? Are you now morphing into a sort of organic, ever evolving tree like form?

CP: What do you suggest I do??? What I do? I write songs and hope for an audience… so each batch of songs reflect (always, however disguised, but am I an unreliable narrator???) my SELF…BUT OF COURSE HOW DO I KNOW THAT THIS IS SO!!!The opposite is true of various waves and movements and bands that write songs for a particular audience…and yes we are organic, of course, in as much as each line up of Calvin Party reflects its own discreet psychology…or psychopathology…. ha!!!IN: CP songs seem to be driven by a wry humour. Is wry observation your starting point when look to create?

CP: One man’s wry humour is… nah, wry humour is of course the hiding place of the sore of heart and the sceptical… that is, that clear realisation that nothing is concrete, nothing is for ever… so yah, I’m wry and sore as fuck…will that do?IN: What inspires Calvin Party artistically?

CP: Pain, self pity, selfish cunts that I hope St. Peter at the gate and will direct to the eternal pain of fire, and the pleasure of fleeting love and desire… the uber noise and imagination of Pere Ubu/Robert Ashley/Pixies/S. Youth/Big Youth/ the rants of Salford’s own king of the slums M.E.S… great films, yes I know what I said about Werner the king of angst and despair and that peculiar Germanic black romanticism… but there is also that uplifting experience of Godard circa Pierot le Fou, the dread that is invited of the photos of Fransesca Woodman, the eroticism of, say, Guy Bourdain, the realisation of the everyday in the work of Robert Adams or Eggleston, the very real humanity of Wendy Ewald or Mary Ellen Mark… the hatred of the U.K Labour party because of its denial of its very reason for being (we all know why we hate the conservatives, but the pain is so much greater because we always thought the Labour party was on our side!!!!)… in that most obtuse of film makers David Lynch… when the Celts beat Rangers… this is such a fuckin’ difficult question… I simply write wee songs and try to avoid cliché  whilst playing with cliché… I don’t know……………………………………fuck me; Hank Williams is such a genius in terms of love and pain…


IN: You sound a bit like a folksy Guided by Voices at times; or a pissed Chuck Berry. Is that fair? You certainly seem to straddle blues and folk-rock, not the obvious paths to take in these skin-tight times.

CP: Ha! Let them scratch for the filthy lucre!!! No commercial yardstick yet no commercial faux avant garde-ism. A faux S. Youth /Fall/M.B.V. etc is the etc and the etc and the etc and to what end? Folk…well I don’t know kind sir, what folk do you liken us to? Let the skinny indie kids have their space, it’s never a space that I thought to invade!!!IN: But… should we care? Actually do people “care” too much about/pay too much attention to music now? Its fashionable isn’t it?

CP: Ha ha ha, aye damn right we should care, popular song has such potential, that it has, in a popular sense become no more than a potential advert for an advertising campaign should not ignore, blah, blah, blah, blah… is that not in itself a marker of its own idiocy!!! So…we all know a parade of bands that have been important and have had integrity and have vanished… I would suggest then that there is a LACK of attention to the pop form… would you not agree?IN: I’m disillusioned. Un-disillusion me about the state of music today. Or at least give me a witty riposte…

CP: Aye, a witty riposte in the face of real politik!!!! I don’t think so, well its simply like this… and it ain’t witty, love yer pals and fuck the commonplace and the routine and the obvious and the pretend anarchists… they’re all the same, they all play off an agreed opposition. But in the margins there exists that which always pulses out of that which they would deny… therein is the optimism!IN: Holland, you’re coming to Holland. Will you be like “peasants with free milk”(c MES) with the weed? Will you cut your hair short and wear adidas tracky bottoms?

CP: I never bought that free milk deal, ‘cept in the U.K! Each to there own, Holland has always been that sort of halcyon land to which some Brits venture to escape the continuum of Victoriana-Puritanism… and the U.K. culture of drunkenness is an outcome of that, a brutal working class expression of dis-connection with all that is seen as valued… so… I will seek to enjoy Holland and its delights, yet they might demur from my potential down falling! My hair is pretty short….trackies are for the deluded the disturbed and the deranged…IN: What should we unsuspecting Continental types expect live?

CP: Ah, the loaded question… could it be the Italian Garibaldi, the humble Scots shortbread or the greatest of English songwriters?… my fave biscuit would always and forever be that man who acutely astutely deconstructs ‘Englishness’ in its glory and in its vapid everyday… hail, hail Nigel Blackwell…a biscuit.