brilliant and baffling in equal measures 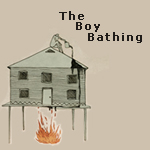 I love it when something like this comes through the door. A Fire To Make Preparations is one of those albums that, despite trying its hardest at times to make me run for the hills in fear of it, has ended up with me falling for it like a teenager with a crush. It’s fucking brilliant.

The opening track is the kind of song you normally hear playing in the background on trendy American TV shows where beautiful people do extraordinary things and fall in love with one another every week. It’s the kind of saccharine, sickly sweet indie rock that normally bores me senseless and yet…and yet….I can’t help but like the thing. I’m not sure why? Elsewhere, the lead singer David Hurwitz makes me laugh. This guy over-acts so much he could almost be a star of one of those TV shows I was just talking about, giving everything such an over the top, “look at me while I’m hurting” vibe that I just want to laugh at him. I mean, I’ve never heard anybody yearn and plead for attention in a song as much as he does in The Miner’s Jewels. (He gets about four or five ‘ayes’ into the word Die at one point.) Honestly, it’s hilarious, and yet…and yet…I can’t help but like the guy.

What saves him are his lyrics, which are a baffling mix of clever-clever and daft-stupid. Clunky and naïve at times, profound and beautiful in others, the lyrics serve as a nice reflection of the music built up around them too. I swear to whatever religious deity you feel like worshipping that by the time you get halfway through this album you’ll feel like you’re listening to something special. This album is just so happy. It really does make me grin from ear to ear and if anything was the sound of a group of friends having the time of their lives, then this album is it. The best thing is, it actually gets better as it goes along and doesn’t peak until the end.

Special praise must be given to Jeannie Schofield, who layers in some of the most beautiful backing vocals heard anywhere outside of Stars and elevates The Pilgrim’s Last Stand into something truly wonderful. Honestly, this is one of the best albums I’ve heard all year. The music is beguiling and utterly charming, the lyrics are brilliant and baffling in equal measures and the…well, the whole thing’s just bloody marvelous. Especially the whole six and a half minutes or so of Fire, which is as overblown and pompous as you want it to be and rounds things off (save for a canny little bonus track) so well you may well stand up and applaud, even if you’re listening to this on headphones with a bus full of strangers around you. I know I did.

I hope this finds an audience. It certainly deserves to. Somebody bring this bunch over to Europe quick because we all need more of this kind of thing in our lives.