…If you set yourself up to put yourself on the edge of human experience what comes forth is your uber-human side. It’s just a fantastic feeling. 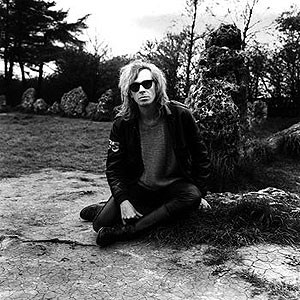 IN: So how did you feel about becoming a star in the 80s and having the fan base?

JC: No, it was absolutely appalling. Luckily I found that out when I was twenty-three. I always thought that it would be dreadful to be thirty-five and discover after all these years that what you didn’t actually want was what you’d been looking for. I hit upon it accidentally while I had a manager like Bill Drummond who found it equally absurd. It meant that the two of us could discover it and realise that it’s a waste of time. By having that moment when you’re twenty-three you can get going early at making something decent. That’s the most important thing – to do something that’s decent. It means that since I was that age Julian Cope has been this figure that my manager, myself and my wife refer to in the third person.

IN: How interchangeable is this character with you?

JC: The Teardrops tread a narrow line between fiction and non-fiction. I remember coming off stage after I’d really blooded myself and Doggen saying, “it’s gotta hurt!”

And I replied, “It hurts now but it doesn’t at the time. If it did hurt I wouldn’t do it.”

“People hate you doing it!”

“Well I’m not doing it for them. I’m doing it because Julian Cope does that.”

It’s not for Julian Cope fans, it’s because that’s what Julian Cope does. It’s what I stand for. Sometimes I’d have weeks of stomach pain from cutting myself too badly but that’s in the real world, the place where you bills. I’m allowed to exist in an underworld for most of my life and while I’m there I might as well be the best underworld figure you can get. I’m amazingly normal but I’m also utterly fucking bizarre.

We started my solo tour last year and I decided to make it totally fucking great. Ady, Acoustika and I decided to start in Yatesbury for the first gig in Barrow-in-Furness. Load-in at 5pm so we set off at 1pm. Of course, thanks to that final schlep (the A590, the world’s longest cul-de-sac) we were late, had to do a two hour show and then spent until 1am talking down a fan who was on acid and was depressed because she’d just realised she was in Barrow-in-Furness and on acid. At which point we realised that we’d booked in to spend the night at a cottage in Aberdeenshire. I’ll drive forever but it was 3am before we hit the motorway and the sun was coming up as we were going through Dundee. I always stay at a particular cottage on a sacred hill that’s at the end of a two mile track from a road in the middle of nowhere.

But at the final half-mile I stopped and said to Ady, “I’ve forgotten how to drive. You‘ll have to drive the final yards, it‘s that‘s cottage on the hill.”

And he said, “Cmon man! On a mythological level you’ve got to have driven! Because it means that we started in Yatesbury this morning, did a show and you’re finishing at eight in the morning.”

So he got me out and walked me around the car, showing me how it worked. I was like, “Hands…I’ve got hands, I know what they are. Feet, right, I know what feet are…and he re-schooled me in driving so I could do the final half mile.”

Then when we got to the end we just walked and looked around. Ady said to me, “that’s one of the most wonderful experiences I’ve ever had” and I replied, “That’s what rock’n’roll is.” It’s setting an itinerary that’s totally beyond what’s acceptable on a human level, then achieving it and having a great time doing it. What’s amazing is that a few days later Ady, who was a fireman for seven years and has had some of the most traumatic experiences in the world, was still talking about it.

If you set yourself up to put yourself on the edge of human experience what comes forth is your uber-human side. It’s just a fantastic feeling. That’s why I took so much acid with the Teardrops. Most people don’t get to do Top of the Pops in their lives. Top of the Pops is shit but everybody wants to do it so we’ve got to be on acid while we do it to celebrate how shit it is. You’ve got to celebrate the absurd and enjoy it. I represent the outer reaches of the Western experience. That’s why I’m not down with the Taliban side who are trying to restrict the human experience. Maybe extremist Christians and Muslims are right and it is wrong to be homosexual. But homosexuals inform some of the greatest thought that I’ve ever had. How could I possibly put it down because of what some cloudy spirit prophet said 1300 years ago? It might be the gay side of the human being is one of the most important sides of us.

It’s dark. It’s far too late. The filming schedule has gone wrong and Cope’s lost; unlike the others he eschews Satellite Navigation. We’ve trekked around the streets of North London and have finally arrived at the gates of Highbury Cemetery. It’s freezing. A small group of Cope fans with proper jobs have turned up after work and waited for hours for this appearance. Three teenage emo kids are hanging around, amused by the idea of anything of interest happening in their neighbourhood.

The plan was to invade the cemetery and parade around the giant bust of Karl Marx but we’re too late for all that. Instead the aim is to salvage something, anything from this final gig of the day. It’s pitch dark and in the absence of any lighting the production crew move their cars to point at the gates and turn the headlights onto full, illuminating a small proportion of those present. By now the drizzle is becoming a full-blown storm, it’s fucking cold and there’s still no band.

Then from the top of the hill the drum beat sounds. The Black Sheep are coming. And as they round the corner it starts to hail, the first sign of a bitter winter.

IN: So what informs the fascination with paganism?

JC: The fact that people sustained what they did in ancient times without the knowledge we have now. The fact that Avebury sustained for a thousand years at a peak of religion that was probably just as daft and corrupt by the end as Christianity is today. But people were running with less information and still sustaining it.

IN: They were the ones on the edge back then?

JC: They were putting themselves on the edge back then. (Julian gestures to the Avebury circle.) We know that 200 metres away they sacrificed a female dwarf in 2800BC. To me that’s evidence that whatever they believe was pretty fucked up. But what we don’t know is whether the female dwarf was ridden with enormous amounts of power in the prehistoric mindset; we don’t know. I don’t believe in throwing the baby out with the bathwater and just because Mohammed is being misinterpreted doesn’t mean to say he didn’t have a good idea of what should be done in the Middle East. As a prophet he was really on the case in terms of talking to his people.

IN: Could there be a more forward-thinking form of religion?

JC: I don’t know whether there’s an enlightened Islam or Christianity. I’m on the side of the Jews. What I love about the Jews is that they never try to turn you on to being Jewish. Jewish humour is the greatest because they are the only who say that we’re the chosen ones, not because we chose Jehovah, but because the fucker chose us. The Jews are stuck with a disastrous scenario where they didn’t even get to choose their god! So they have a great self-deprecating sense of humour.

IN: Are people less disposed to question nowadays?

You can return here to Part One, Part Two, Part Three here.